Rethinking “Trust” in a New Era of Data Privacy

In 2018, we witnessed a groundbreaking shift in the way we think about data, privacy and brand trust.

The culmination of high-profile corporate privacy scandals and new wide-sweeping data legislation has forced consumers to get to grips with their digital footprints. It’s compelled companies to confront and re-evaluate what’s at stake concerning commercial data collection and processing.

It’s also coincided with a sense of fatigue and disillusionment with contemporary online marketing techniques that has begun to boil over.

While ad-blocking tools may have mitigated some of this disillusionment, they have increasingly and indiscriminately hacked away at vital revenue streams in companies that rely on online advertising.

Together with pressure from declining print advertising revenues, the spread of ad-blocking tools has led many organizations to look towards pursuing new subscription-based business models to mitigate against the threat.

The dawn of new forms of advertising.

These promise to remedy the irrelevant and overabundant forms of advertising which brought about the spread of ad-blocking in the first place. But these tech-driven ad formats often require access to potentially sensitive information, such as location data or a user’s camera or contacts.

While they may hold the potential of personalizing the brand-consumer relationship, these new ads face an even stauncher challenge in encouraging consumers to share the kinds of data the formats need to have an impact.

The gravitas surrounding this turning point in the data privacy landscape is clearly embodied in the GDPR, enacted on May 25th under the EU.

But this is only the start.

Having a global reach, the GDPR has shifted the balance of power towards the consumer, leading to new perspectives on consumers’ right to share or withhold data online.

Consumers are more privacy-aware, but still don’t feel in control.

Despite much of the high-profile privacy-related events of the last 12 months stemming from Europe and North America, privacy concerns are rampant across all of our tracked markets.

From this perspective we can see that internet users in many markets are more worried about how companies are using their personal information than the impact the internet has on personal privacy and security in general.

Latin American consumers are particularly worried about how companies use their personal information, and along with internet users in APAC are also among the most concerned about the internet eroding their personal privacy. 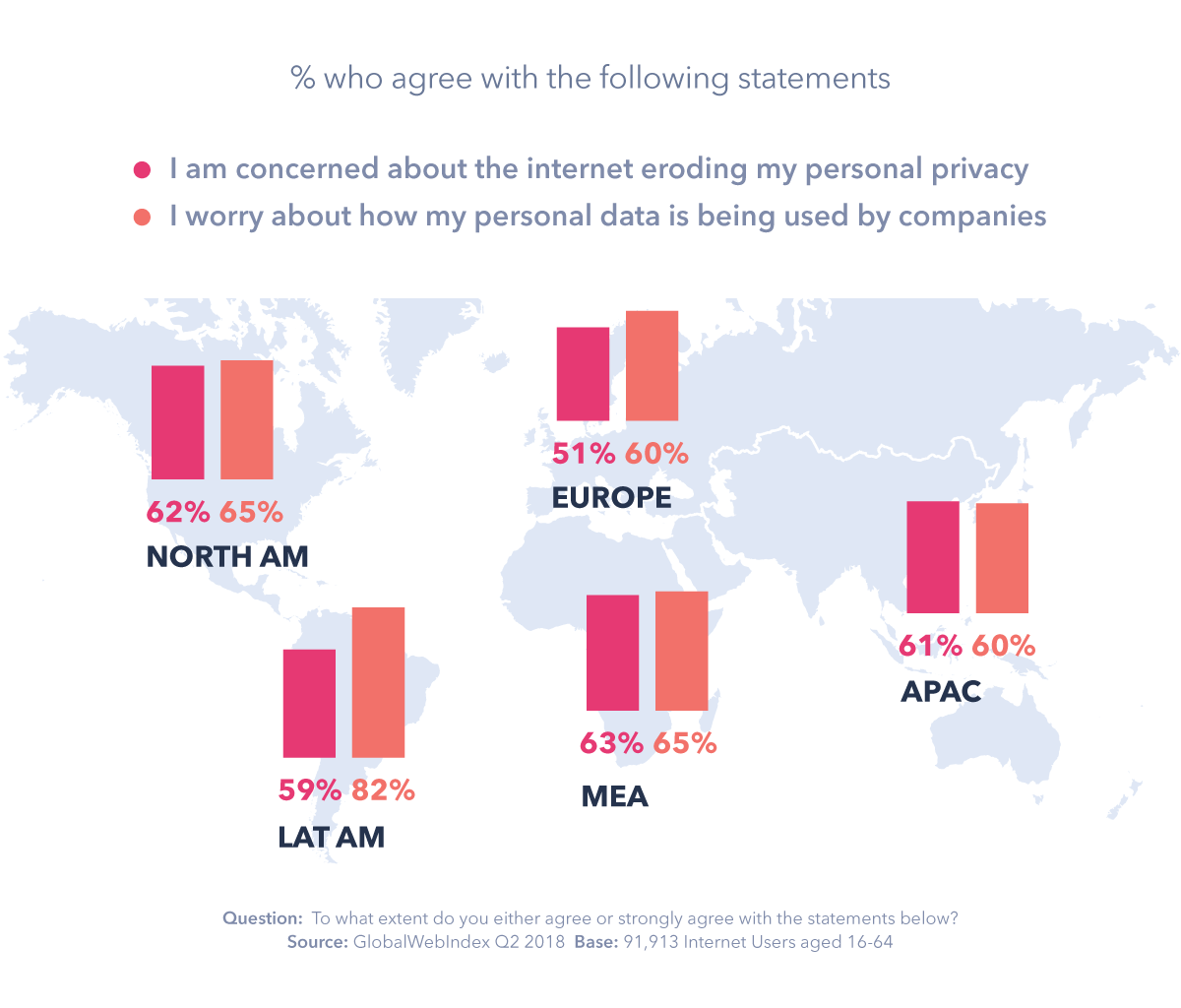 In light of recent events, we recently conducted a special study in the UK and U.S. to gauge the current consumer sentiment towards the modern data privacy landscape. We found that the last 12 months have had a profound impact on how internet users in the UK and U.S. perceive their online footprint.

72% in these markets say they’re more aware of how companies collect and use their personal data than they were 12 months ago.

Interestingly, U.S. consumers (73%) were more likely than those in the UK (65%) to agree with this statement, which is likely a result of U.S. consumers being particularly affected by the privacy scandals still circulating in the nation’s media.

But it’s also highly likely that the GDPR has increased this awareness, especially given the attention that it has received in the U.S.

California has implemented its own regulation modeled after the GDPR, and Vermont has enacted a law to improve accountability in data sharing between companies. As this movement paves the way for more U.S. states to follow suit, tech companies have been quick to lobby the White House against introducing nationwide models based on the GDPR or the California Privacy act. 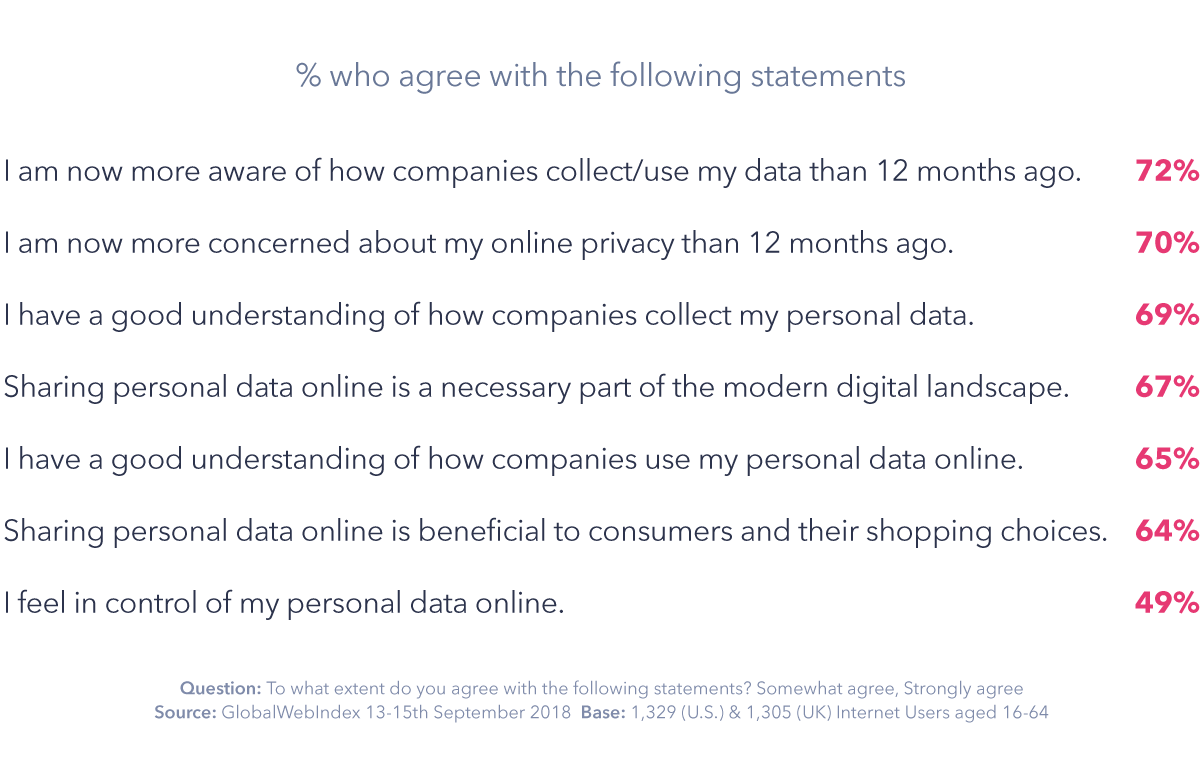 This increased awareness of how companies collect and use data online has done little to alleviate concerns over online privacy more generally.

In fact, 70% of internet users in the UK and U.S. are now more concerned about their online privacy than they were 12 months ago. It’s also very telling that less than half say that they feel in control of their personal data online, putting this significantly below the other options in our chart.

With such a discrepancy between being aware of data sharing and feeling in control of it, it’s clear companies must now focus on building genuine relationships with consumers to close the gap.

Trust is at the heart of online brand-consumer relationships.

To build these consumer relationships, trust has become an absolutely fundamental part of any brand proposition.

The GDPR mobilized companies all around the world to be upfront with consumers, and allow them more control over which data they share.

Within this new digital landscape, company reputations hinge on their trust and transparency credentials over personal data. Despite this, not every corporate response has sided with the consumer. For example, many U.S. news sites that aren’t compliant with the GDPR are still not available to EU citizens.

The majority of consumers in the UK and U.S. (64%) do believe sharing personal data online can be beneficial to them. But as many still don’t feel in control of their data online, companies that don’t demonstrate respect for personal information will soon lose credibility and stand out from those that do.

This is an important consequence of the events in the last 12 months. Trust is now not only a major commodity for companies, but also a central component in their ability to compete.

While consumer confidence in online marketing has clearly been impacted by recent privacy scandals and the GDPR, it’s important to understand whether these concerns have saturated other online industries too.

When we asked internet users in the U.S. and UK to rate different online industries by their level of trust, we can see how online retailers enjoy an extremely positive reputation.

60% of consumers trust online retail services with handling their personal data. This is the only sector in our chart in which the highest consumer trust rating outscores all other ratings. For every other sector, consumers are most likely to say they’re undecided on their trust levels.

Music and video streaming services also enjoy a strong trust reputation among these internet users. And, despite the apparent disillusionment with the online advertising industry manifested in the ad-blocking trend and recent cases of tech companies scanning emails to inform ad targeting, search engines and email services also have positive reputations. 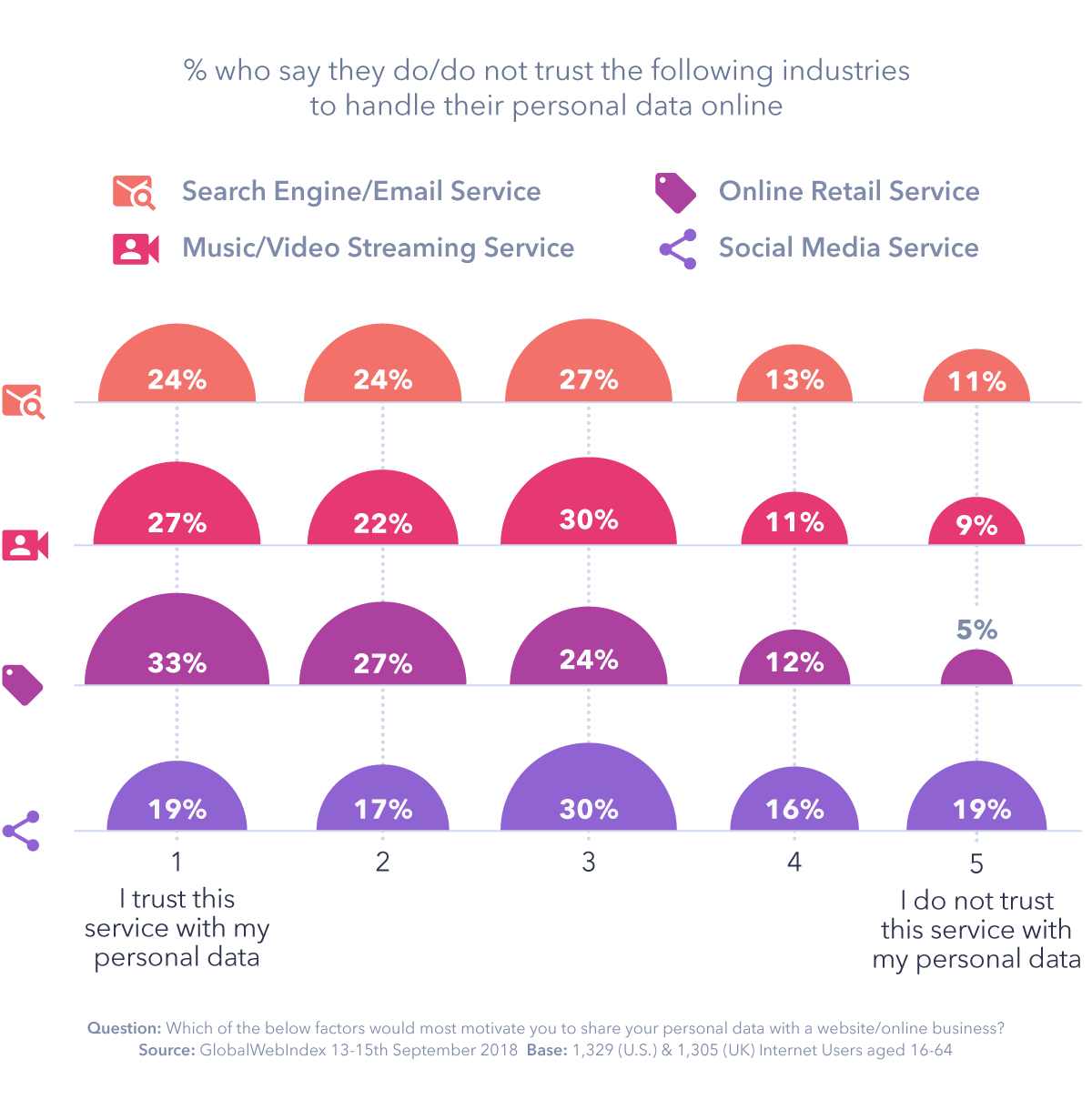 From this perspective, we can see the social media industry still suffers from its association with online privacy scandals.

Compared to the other industries in our chart, consumers are most likely to say that they don’t trust a social media service with their personal information, at 1 in 3. That said, another 1 in 3 do trust a social media service with their data, with the strong majority saying they’re undecided. So while this industry may be fighting back to recover its credibility and reputation, it seems consumer opinion is largely open to improvements.

Almost half of 45-64s say they don’t trust social media services with their personal information.

Despite this cohort being more untrusting of all of the listed industries, their skepticism is much more pronounced for social media.

Looking at how competitive the social media landscape is, it’s clear that trust is crucial when winning over new members and retaining existing user bases.

We know from our wider research that 32% of all users in the UK and U.S. say they have deactivated or closed a social media account in the past 12 months. 45% of consumers in these markets have also made a conscious effort to decrease their daily time spent on social media in the last 12 months. It’s easy to see why this data-driven trust deficit in the social media industry may have been a contributing factor to the decline in engagement.

As various functionalities are similar across many social platforms, thanks to the major networks drawing inspiration from each other in a bid to stay competitive, trust will be a deciding factor for many consumers as they choose which platform to turn to for certain activities.

What is the true value of personal data?

A common theme across many commentaries surrounding the ad-blocking debate has been the need for consumers to understand that there’s a value exchange to be made in online advertising. In this exchange, consumers supposedly relinquish some personal information and are rewarded with advertising which is relevant, targeted and meaningful.

However, this conventional idea is beginning to look redundant, at least from the consumer’s perspective.

The past 12 months have clearly demonstrated the value online companies place on consumer data, and the lengths they’re willing to go to acquire it. In light of this, consumers are now beginning to rethink the true worth of their personal information, and what this means for the idea of a value exchange between brands and themselves. 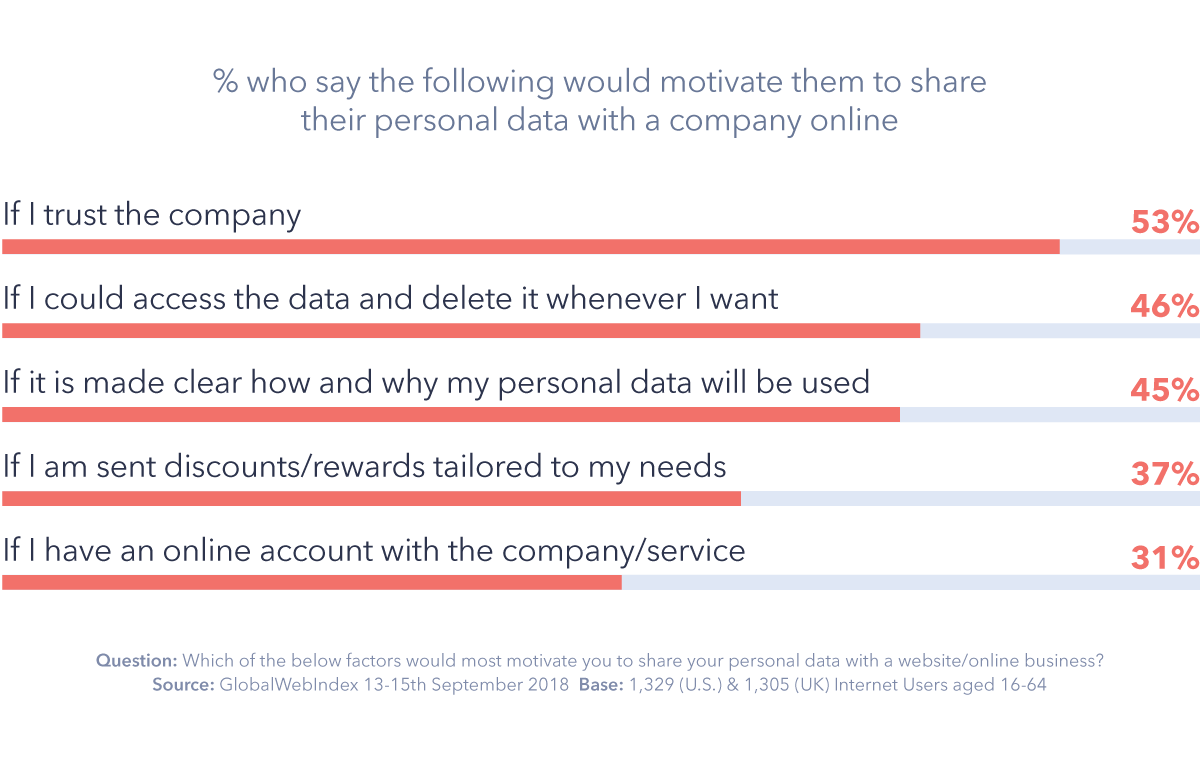 When we asked consumers what would most motivate them to share their personal data with companies online, having trust in a company (53%) and having the ability to access and delete the data (46%) were the most important factors across all of the demographic breaks.

But beyond these prerequisites to data sharing, younger age groups tend to look at their personal information as more of an asset, placing a much stronger emphasis on getting something out of sharing their data with companies online. As many companies scramble to present themselves as trustworthy in a post-GDPR landscape, consumers now have more bargaining power with their data and many are keen to take advantage of this.

Brands now need to think more creatively about how to entice consumers to share their data.

Our data shows that, mainly among younger age groups, there’s an appetite for this form of value exchange. For example, almost a third of 16-34s say that they would share their data with a company online if that data could be exchanged for free access to content or services.

Why personalized ads are still crucial.

Even if personalized advertising and product recommendations no longer define the value exchange in online advertising, the ability to deliver relevant and engaging advertising remains crucial.

Technology companies have been very vocally concerned about the impact the GDPR and similar privacy regulations have on their ad tech capabilities. But having to “unambiguously” opt-in to data sharing agreements may not completely undermine the viability of ad tech in delivering quality and relevant ads.

As we mentioned earlier, the majority of consumers do believe data sharing can be beneficial to them, and almost 2 in 3 recognize sharing personal data online is a necessary part of the modern digital landscape. Even in markets like LatAm where we see the strongest concerns over how companies are using their personal data, internet users are among the most likely to discover brands via personalized purchase recommendations on websites, at 20%.

For consumers, one of the most fundamental ways a company can prove their data collection is “trustworthy” is by being transparent about the purpose behind it; more than half in the UK and U.S. say this.

In any case, whether they’re relying on personal data for their ad campaigns or if they’re one of many companies reviving contextual ads in the wake of the GDPR, online companies must begin thinking in terms of transparency-by-design to secure consumer trust.