As the 2018 FIFA World Cup kicks off, brands are starting to unveil their campaigns.

Budweiser has launched its biggest ever global campaign ‘Light up the FIFA World Cup’, while Domino’s has teamed up with Sky Sports News to target hungry viewers during the ‘pizza purchasing triggers’ experienced throughout.

Our latest research shows over half of internet users globally will be following or watching the World Cup. So what steps can brands and marketers take to secure a victory?

It’s no secret that over the last few years, sports fandom has progressed towards social media.

Facebook, Twitter and Snapchat are all slowly ascending into sports broadcasting and Twitter recently struck a deal with Australian broadcaster SBS to produce a live show for the 2018 World Cup.

Amazon has even announced it has secured one of the two remaining packages for the Premier League rights.

So it’s logical that social media platforms step up in this area. Our data shows the numbers turning to social media to watch or follow sports are on the rise:

A significant number of internet users are set to tune in via their TV sets (37%), but social media is going to act as an important support to the TV screen, providing highlights and behind-the-scenes content.

This will apply to casual viewers in particular who will not always clear their schedules to watch every game.

Key to note is that audiences now span multiple platforms and broadcasters alone can no longer satisfy the appetite of the modern football fan.

Virtually every World Cup fan (95%) will be using another device as they watch the games. So it’s not all about TV ads; marketers will need a strategy that extends across multiple screens to fully engage their audience.

Fans are not necessarily looking to search for products to buy during this time, though. They want to see content related to what’s on their main screens – whether that’s real-time reactions to the game, or information on the players who score.

In fact, social media is where most will head on their second-screens. Out of the 10 second-screening activities we track, World Cup fans are most likely to be using social media (51%) or messaging friends (49%).

But the second screen is not the place to push promotional content during the World Cup games.

It’s about becoming part of the conversation and creating content people want to see, without getting in the way of people accessing the commentary and updates they want.

Sports fans are demanding more and more immersive experiences from marketers in the form of exclusive videos and content – or new tech adoption such as VR.

Video in particular is set to be a firm touchpoint for marketers at the World Cup.

World Cup fans are 20% more likely to be watching branded videos each month.

They’re also more likely to say that access to exclusive content and videos would affect their likelihood of purchasing a product.

Content that makes fans feel closer to their sports idols is likely to have particular power. Fans are increasingly demanding an insider’s view into the lives of their favourite athletes, with many athletes happy to share their training regime and private details of their lives. The savviest brands have cottoned onto this merging of sporting and lifestyle worlds.

NBA star LeBron James, for example, teamed up with Oculus to bring a new virtual reality experience, ‘Striving for Greatness’.

The short film will allow fans to feel part of James’ training team as he trains at the basketball court and will feel closer to him as he opens up about his goals and challenges.

Meanwhile, awareness and interest in Oculus VR will also increase with new capabilities built with this technology.

The World Cup offers marketers a truly global audience that spans across different ages and demographics. Behaviours and attitudes differ across the world, but social media is one place where the vast majority of fans can meet in one place.

Brands will only have a small window where they can grab consumers’ attention while the games are on. If they focus on providing supplementary information, exclusive or behind-the-scenes content and interactive experiences they should score with their audiences. 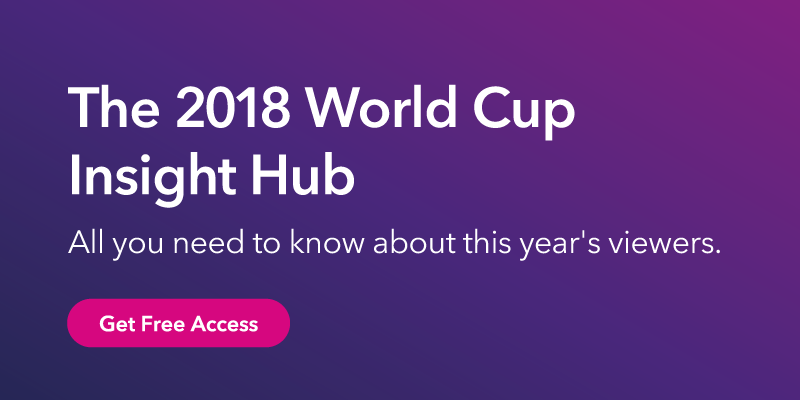