Year in Review: The Best Data-Driven Marketing Campaigns of 2018

2018 was a year of change for everyone in the marketing and advertising arena, one that saw data and insight moving even further into focus.

Deep consumer insight is now playing a more central role in campaigns of all shapes and sizes, keeping the ROI promise and focusing attention on the right audience.

Throughout the year, we’ve highlighted some of the most innovative and impactful campaigns of the month that prove the growing connection between data and creativity.

These five campaigns show us how.

1. Change the Facts, Not the Fro – Ogilvy

One in five black women feel social pressure to straighten their hair for work.

This was just one of the key insights uncovered by the 2016 Good Hair study, investigating the stigma and cultural bias experienced by women with Afro hair.

Putting this research into action, Ogilvy UK used it to shape an impactful campaign, calling for change.

This campaign challenges misconception of straight hair as synonymous with beauty and success, urging people to think about how this portrayal affects people from every walk of life. The overarching message is a clear one:

Change the facts. Not the fro.

Launching in time for World Afro Day 2018, a global event celebrating Afro hair, culture and identity and offering education to create equality, it emphasizes the need for the Afro to be recognized in its natural glory. 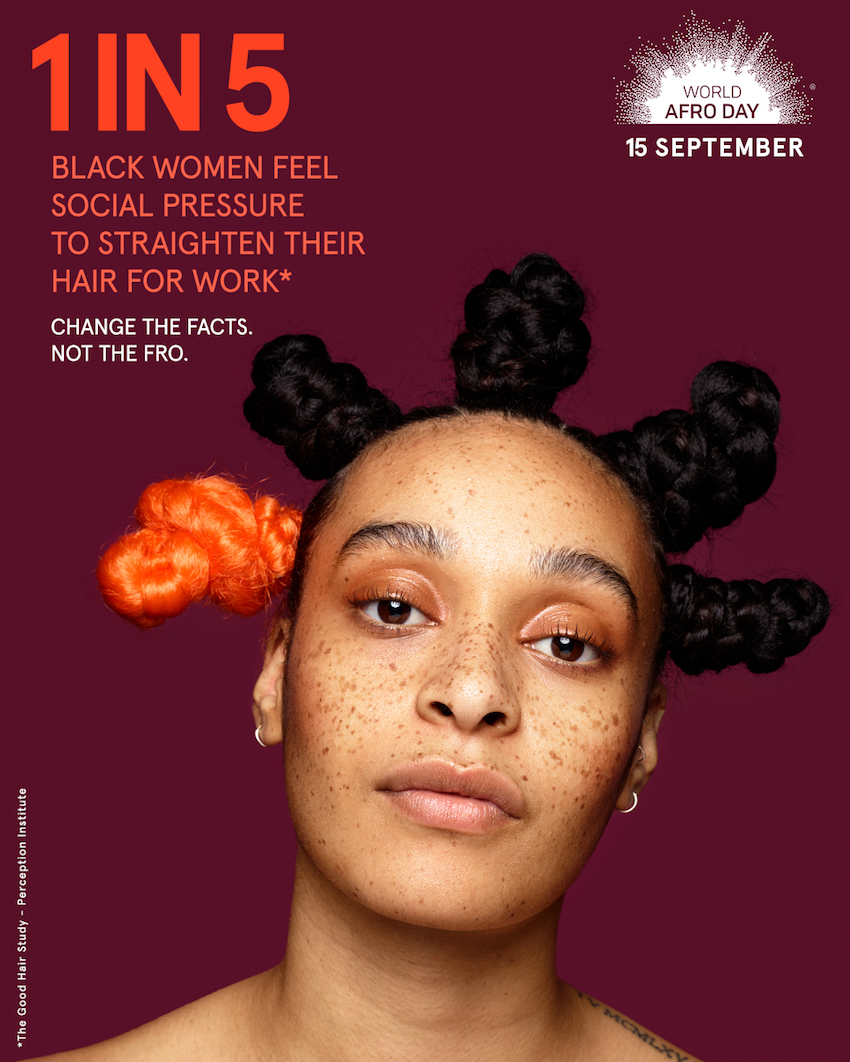 Every so often, leading agencies and advocates for change come together to do something truly impactful.

This work shows the true value of what can come from using deep research to guide creative talent.

Focusing on a real world issue that’s been largely untouched by the media, the teams could reveal the truth behind the global problem, with insight that proved it.

Spreading its presence across DOOH, social, PR and online, with dedicated hashtags #WorldAfroDay and #Changethefacts, the teams gave people a reason to join the movement.

Aptly portraying the emotion at the heart of the campaign, this is data-driven storytelling at its best.

Reports of domestic violence in the UK increase 26% when England play, and 38% when the team loses.

This was the insight uncovered by JWT that highlighted a serious issue lying under the surface of national football.

Forcing the public to reimagine what the sport means for victims of domestic abuse, the finding formed the basis for a striking campaign, launched at a pivotal time for action: during the world’s biggest football tournament.

With powerful images spread across digital, OOH and print, the ads ran on every England, Switzerland and Japan match day, right through to the end of the World Cup.

Portraying the national flags in shocking depictions of abuse, each image was tailored to the country in question, with one message reigning:

“If England get beaten, so will she.”

Urging fans to remember victims amid the hype while highlighting the fact that there’s help at hand, the ads show there’s far more to the game than we might think.

Thanks to this campaign’s unique and impactful insight, directly linking football and domestic abuse, the seasonal message was sure to resonate.

And launching the campaign at the very moment victims are proven to be more vulnerable than usual, the NCDV could position themselves as a key source for help and support, when it’s most needed.

8 kids a day are accidentally killed or injured by ‘family fire’.

This is the alarming insight that shaped the campaign, portraying a serious need for public attention.

This, along with the findings from the New York Academy of Medicine, who found that more than 4.6 million kids live in homes with guns that are unlocked and loaded, and three out of four of them know where those guns are kept.

The core message is a deeply emotional one that tugs at the heartstrings to reinforce the notion that:

But instead of urging people to take sides on the topic of gun ownership, the message is a call to gun owners to make safety their number one priority.

With this goal in mind, Droga5 spoke to the families of gun owners across the country. From their conversations, the team identified overarching themes of closeness, love and fear which governed this innate urge to protect their own.

Running nationwide online, in print and across broadcast media, the campaign is supported by a website, endfamilyfire.org, offering practical tips on how to practice gun safety in the home.

Using an impactful insight to change the conversation and shift perceptions around gun ownership, the strengths of this campaign lie in its ability to pose questions rather than point fingers, urging people to think differently.

It says that regardless of whether you’re for or against, there are measures we need to take collectively to prevent tragedy.

An estimated 76% of young adults turn to a peer in a time of crisis for support, according to a survey conducted by the Jed Foundation.

Using these insights to inform their creative campaign targeting 16-24 year-olds, the teams saw an opportunity to raise much needed awareness on the issue at a fundamental time when many are at risk.

Mental health is still something of a stigmatized topic, despite conversations shifting in recent years. But too many young adults are struggling with mental health issues and not getting the help they need. This campaign says it’s time to speak up.

Urging its audience not to wait for the awkward moment to pass when you suspect a friend is struggling, it points to the familiar fear that many face of asking the wrong thing. But the message is clear: It doesn’t matter how you say it, just do.

“No need to be an expert. Just to be a friend.”

The star of the campaign is awkward silence personified, who highlights the glaring opportunity that so often presents itself to show you care.

This campaign proves the power that lies in uncovering an insight unique to your audience that can actually drive change.

Not only does it give the brand a key purpose, it proves its deep understanding of its target audience and the challenges they face in everyday life.

And, ensuring every element of the creative reflects the key insight, it finds a way to actively help the young people it’s targeting, highlighting how one seemingly small gesture can ultimately save lives.

5. One Number Different – YMCA of the USA

Kids born into a lower-income area code have less access to fresh food, quality education and job opportunities, meaning they have a much lower chance of getting ahead in life.

This was the insight that fuelled the creative campaign, focused on highlighting the inequality that exists across America.

“In America, the zip code you’re born into can determine your future.”

This is the key message the campaign puts forth – how something as simple as one number can spell completely different schools, jobs, dreams, problems, and in turn very different opportunities for the citizens of these neighborhoods.

The campaign goes on to explain that the Y is there to help kids from all backgrounds and zip codes to make a difference to their futures.

This powerful, but simple creative work is one of many from Droga5 that hones in on data to tell a hard-hitting story.

Tapping into the right emotions, it proves that a theory backed by insight can make a real difference – whether by simply starting a conversation, or by by changing the way we think.