Where Do the Best Marketing Ideas Come From?

“Everything begins with an idea.” ~ Earl Nightengale

Every great marketer needs great ideas. These ideas are where powerful campaigns begin and inspiring brands are born. And while finding inspiration is a challenge we all face, there are more ways than ever to create unique ideas that move – starting with insights.

The best ideas are formed when you focus on your audience. If you can understand what defines them, what moves them and how you make them feel, you can tap into the perceptions you want to shift.

Generating powerful insights from the wealth of consumer data in existence is the first step to take. With this information driving your communications, you can drive meaningful creativity that ensures your marketing speaks to the right people.

Here’s our breakdown of some of the greatest marketing ideas today, as we take a closer look at where they came from.

The idea was formed from the insight that travellers increasingly want to experience places as a local would, with the campaign tapping into this by opening up local neighborhoods for travellers to experience, complete with insider knowledge and tips.

Putting personalization into practice, the brand used its app to evaluate travellers’ preferences, matching them with the right homes, neighborhoods and experiences to suit their needs.

According to Airbnb’s co-founder and chief executive, Brian Chesky: “The number one reason people chose to travel on Airbnb is they want to live like a local. They don’t want to be tourists stuck in long lines, fighting with the crowds to see the same thing as everyone else. Our hosts offer more than just generic hospitality – they welcome travellers from around the world into their communities.

Today is the start of an exciting journey to help people not just go somewhere, but truly live there.”

Voted Marketing Week’s campaign of the year in 2016, Virgin’s “most ambitious brand exercise” was designed to show “real people doing authentic things” to promote the company’s long-haul options and encourage people to #SeizeTheHoliday.

This idea came from an insight based on their main consumers: Two thirds of Virgin Holidays consumers purchased holidays primarily to the US, Caribbean and Florida. In a bold effort to put their vast range of alternative destinations on the map, the creative teams set out to prove itself as “a populist holiday brand with something for everyone.”

The new campaign leveraged the power of live TV advertising to celebrate diversity, showcasing consumers from all walks of life sharing experiences and taking on the world, encouraging others to do the same. Now ranking higher than ever as a holiday airline of choice delivering great customer experience, the campaign is a powerful example of a brand using insights to shift perceptions in the desired direction.

“This is the single biggest and most ambitious brand exercise we have ever undertaken.

We have looked at everything from our business purpose, to our brand platform, to what channels we use to communicate with customers.”

3. Under Armour – Rule Yourself

The second most shared Olympics ad of 2016, Under Armour’s Rule Yourself campaign by Droga5, follows in the footsteps of its previous work in a bid to overtake Nike as the biggest athletics brand in the world.

The creative idea, “It’s what you do in the dark that puts you in the light”, was sparked from the insight that “you are the sum of all your training.” Speaking directly to their target audience (specifically millennial men between the ages of 18 and 34, three quarters of whom according to research by Unruly will lose trust in a brand if an ad feels fake), the campaign held up Under Armour’s consistent reputation for authentic marketing, showing us the things we don’t always see.

The ads tell the stories of three athletes, aptly portraying the sheer determination, hardship and repetitiveness of training, far from the romanticised version that’s often depicted in the media.

Adam Peake, executive vice president of marketing at Under Armour stated in a press release: “Under Armour provides the footwear, apparel and equipment the athlete needs to push through a tough workout.

But we also want to give them that extra inspiration to improve every day, to keep building their inner army, and to stay focused on success even when the going gets tough.”

For its third annual #MakeWhatsNext campaign, Microsoft released their ‘Change the Odds’ campaign to coincide with this year’s International Women’s Day. Urging young girls to change the world and stay in STEM, the ad is a challenge to women to push gender norms and “change the odds.”

The idea was formed based on the insight that only 6.7 percent of U.S. women and 16 percent of women globally graduate college with science, technology, engineering and math (STEM) degrees. Working as part of Microsoft’s broader efforts to make computer science accessible to all – offering programmes and resources through their Microsoft Philanthropies YouthSpark initiative – the campaign has one clear message for girls: “Change the world. Stay in STEM.”

Emphasising their focus on making sure the next generation of inventors and creators are as diverse as possible, Kathleen Hogan, Microsoft executive vice president, Human Resources explains:

And that means having many more women who can help influence and build our products and services.”

As listed in our 10 Most Powerful Examples of Marketing that Works, Spotify’s largest ever campaign push is certainly an idea worth mentioning. Cleverly leveraging the power of consumer data to fuel its thinking, Spotify made its users the stars of their campaign, giving thanks for a ‘weird’ 2016.

The idea was quite simply born from data, with the internal creative team closely analyzing listener habits over the past year to inspire humourous and impactful headlines which were then splashed across billboards and social media.

A unique example of data-driven marketing, this is a consumer-centric campaign that shows just how behavioral insights can drive meaningful creativity.

As Spotify’s chief marketing officer, Seth Farbman, told Creativity: “There has been some debate about whether big data is muting creativity in marketing, but we have turned that on its head.

For us, data inspires and gives an insight into the emotion that people are expressing.” 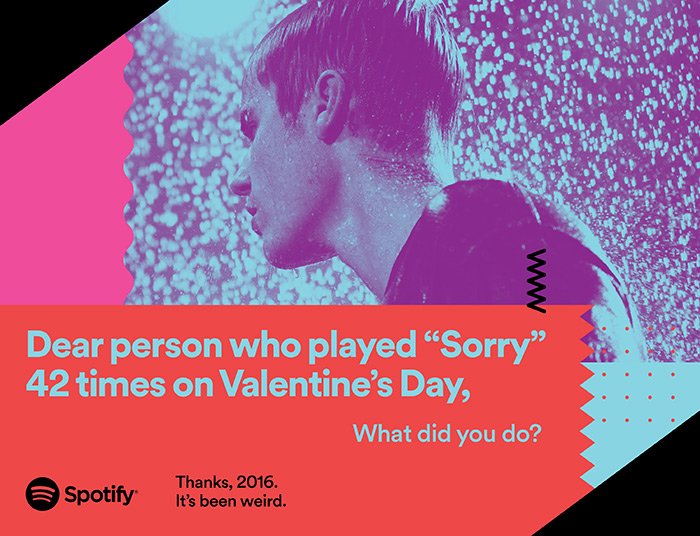 Created by Mother Design, the activity kicked off online in June, inviting visitors to create their own “Sorry not Sorry” posters, expressing their eclectic identities, and encouraging others to show their individuality.

The idea, born out of BBC’s focus on 16-34 year-olds across the UK, aptly ties in with the widespread uncertainty around Brexit and the division within, exploring the personal and cultural identities and “uniqueness” of young people and encouraging young viewers to feel comfortable in their own skin. Broadening the channel’s appeal to millennials, the campaign urges its young viewers to use the platform to elevate their voices and feel counted.

As Dan Broadwood, strategy director at Mother Design, explains: “The campaign was designed to enable the contributors and audience at the show’s heart to share their unique stories with the world.

It’s a loud, proud and personal expression of identity in today’s culture.” 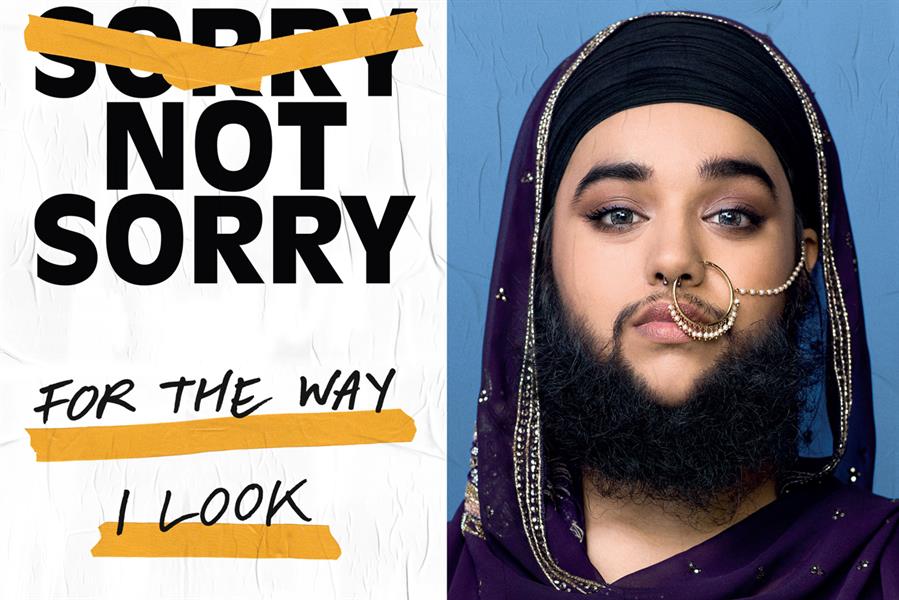 In a risky attempt to transform brand perceptions of the retail chain, Lidl UK launched its £20m ‘Lidl Surprises’ campaign, using real people and real stories to prove their dedication to their consumers.

Stemming from the insight that UK shoppers largely perceived the band as a low-cost, low-quality option, the idea was shaped around its new strapline: ‘Big on quality, Lidl on price.’

With ads spread across TV, print and in-store featuring real-life, east-London farmers and members of the public, Lidl relied on its authentic approach to turn a negative image into a positive one.

The fastest growing grocer in British retail, for the 12 weeks of the campaign, the brand reported a 13.8% increase in sales. Outlining why it proved so successful, Claire Farrant, advertising and marketing director at Lidl UK, explained:

“Our products have always been famously great value, and this campaign really highlights just how much more shoppers can get for their money at Lidl, without ever having to compromise on quality.

It offers key meal solutions for all the family demonstrating the great range we have at Lidl.”

A regular feature in our most impressive campaigns of late, Pret’s ‘Little Veggie Shop’ campaign is an ideal example of creative branding that shapes its products around its customers.

Based around the insight that showed their consumers were in favour of more veggie options, the idea also sought to tap into the growing ‘clean eating’ trend among millennials.

Relying almost exclusively on in-store advertising and social media to promote the launch of its first standalone vegetarian pop-up shop, Pret proved the power that lies in listening and responding to your audience. With the brand’s vegetarian option sales achieving a 13.9% increase, the campaign even led to the rollout of more permanent sites.

“If customers are good enough to give you their time, you need to listen.

Marketers find it hard to listen, they usually have their minds already made up. That is a mistake because if customers want to be part of you brand, you need to take them seriously.”

For its third year running, Apple’s infamous ‘Shot on iPhone’ campaign which has been featured on over 10,000 billboards across 25 countries puts real people at the heart of its marketing.

Crowdsourcing photos from iPhone users to feature on billboards around the world, the idea was a simple one – originally formed to showcase the professional camera quality of the iOS 6, splashing photos taken on the device by amateurs and professionals across photo-sharing platforms like Flickr and Instagram. Taking this approach to new heights, the campaign exploded into a game-changing effort by Apple, encouraging users to join the movement and feel connected to the brand.

Juan Carlos Ortiz, creative chairman of the DDB Americas ad agency network told Business Insider: “The idea was that it was open to people. You can take a photo with your iPhone 6 and it could go up on a billboard all over the world. It wasn’t just about taking a picture, it’s that your picture can be displayed in the most exciting places in the world.

It was about arming people with a real opportunity to take part in something big.”

10. Old Spice – The Man Your Man Could Smell Like

Launched in 2010, this iconic campaign by Old Spice and Wieden+Kennedy is a perfect example of a brand shifting consumer perceptions with a simple insight.

As a 70 year-old brand, Old Spice was aptly positioned as a product of choice among older men, largely perceived as an “expert on masculinity and being a man.” Combining this insight with the finding that women were responsible for more than 50% of body wash purchases, the team formed the idea in a bold effort to to appeal to younger consumers – both men and women.

Using the ad campaign to expertly tap into these perceptions, the brand encouraged women to stop buying women’s products for their men, pushing the message: ‘Anything is possible when your man smells like Old Spice and not a lady.’

According to Eric Baldwin, Creative Director at Wieden+Kennedy:

“The biggest thing we learned overall was the importance of keeping your creative ideas simple… Don’t over-complicate things. That’s been pretty much the key to all of our great campaigns.”