The 10 most important social media statistics for 2022

Looking for the latest social media statistics to fuel your strategy, growth, and ROI? It’s your lucky day.

Social is showing no signs of slowing down. The scene is changing rapidly, with new apps and channels popping up to cater more specifically to consumers’ needs and desires.

To supercharge your social media marketing strategy, you need to understand why people are behaving the way they are. It’s a pretty big deal.

Love or loathe it, here are the 10 big social media statistics in 2022 all marketers should know about.

There are some clear winners in the global race for regular social media use. Outside of China, Facebook takes the crown, followed by Instagram; while TikTok has officially leapfrogged Twitter into third place.

In the US, Snapchat is the third most popular social media app among Gen Z users, and 44% say they visit Reddit at least monthly. Pinterest is most popular among Gen X.

We’ve also spied an interesting social media trend at the lower end of the scale. Despite popularity back in 2020, voice-based social networking app Clubhouse has slid down in the usage charts.

It’s likely been pushed aside by social contenders successfully integrating similar voice and audio features into their platforms. For instance, Twitter Spaces is now expanding to include podcasts. It’s a dog-eat-dog social media world.

Since 2020, the number of internet users who say they use TikTok monthly has risen by 40%. Interestingly, engagement has grown the most among older consumers, demonstrating the social network’s cross-generational appeal.

With its sound and music features helping to drive video creation, parent company Bytedance is now looking to disrupt the music streaming space with TikTok Music, a challenger brand set to rival the likes of Spotify and Apple Music.
What impact will this have on the podcast scene? Watch this space.

With TikTok holding its own, it’s no surprise short-form video content is popular with consumers. Over half (51%) of social media users say they’ve watched a short video (under 10 minutes) in the last week.

That doesn’t, however, mean longer videos (over 10 minutes) are losing favor. Far from it, actually. 39% of social users say they’ve watched one online in the last week. Video marketers, take note.

4. How much time do people spend on social media?

On average, consumers are spending almost 2.5 hours a day on social media. That’s a significant chunk of time to be glued to a screen. But if we look deeper into generational data, we shed light on a big change.

Year-on-year, millennials, Gen X, and baby boomers are all spending slightly more time on social media. The exception to this trend? Gen Z, who are spending less time on social.

Blasting the misconception that younger consumers are glued to social media, this insight proves they’re taking time to step away from screens. For more on this trend, check out our Gen Z report.

Our Zeitgeist data reveals the countries where social media users are most interested in taking part in the metaverse.

By comparison, social media users in the USA and the UK both have significantly lower interest, each at 13% respectively.

So what activities are these social media users interested in using the metaverse for?

Intended to be a safe space to unite people through socially-driven tech, it’s no wonder consumers want a slice of metaverse action.

6. How do people feel about social media?

28% of social media users are worried they’re spending too much time on social media. There are huge differences by age, as 35% of Gen Z have this fear, compared to only 22% of Gen X, and 18% of baby boomers.

These insights may help explain our earlier statistic on why Gen Z are spending less time on social. Factors like mental health may play a role here, as just 1 in 3 say they’re comfortable talking about it – and this figure remains unchanged since Q2 2020.

The decline of digital marketing influencers and rise of authenticity are also likely to be pushing younger generations away from fake, filtered versions of reality. More on this next.

7. What do people dislike about social media?

In 8 markets studied, misinformation was users’ biggest social media frustration, but they have standout attitudes across platforms.

Compared to the average social media user in these markets:

Insights like these justify the popularity of less commercialized apps. Rising star BeReal is taking social media by storm, as consumers shift away from the heavily-filtered fantasies of influencers, towards more authentic snaps shared only with close friends and family within a two minute daily window.

Not only does this cut down time spent doomscrolling on social, it reduces the pressure of perfectionism for active users, shifting the purpose back to connecting with real people. With that in mind, it’s easy to understand the appeal.

8. Can social media be used for good?

On the flip side of social frustration, is social wellness. Millennials are the largest audience on social media, making up 37% of all users. They’re also the most likely generation to think social media is good for society – and 41% do.

It all comes down to personal perceptions of social. Every touchpoint contributes towards the experience of active users: from which platforms they use, to what they use them for, to how the content they see makes them feel.

9. What are people using social media for?

Huge trend alert. When it comes to reasons for using social media, we’ve seen the fastest growth in watching or following sports, increasing 5% among social media users year-on-year. This growth is mirrored across Instagram, Snapchat, Twitter, Facebook, and TikTok – so definitely worth paying attention to.

We also see this echoed in our latest Sports data. TikTok is becoming the go-to social media platform for sports content, with a 70% rise in fans outside China using it to follow sports.

Sports communities have always been at the heart of the game, with fans doubling up as brand ambassadors for clubs, teams, and professional athletes. And with the rise of the metaverse, social interaction through sports is bound to grow.

Wondering how effective social media marketing is for brand discovery and research? Here are 3 insights worth remembering:

Social is also becoming a new form of search.

43% of consumers look for more information about brands, products, or services through social networks. That’s why it’s crucial to incorporate social media into your digital marketing strategy.

You don’t have to be on every social platform going, but make sure you have a solid social media presence. If active users can’t find you, your next best competitor will do just nicely. 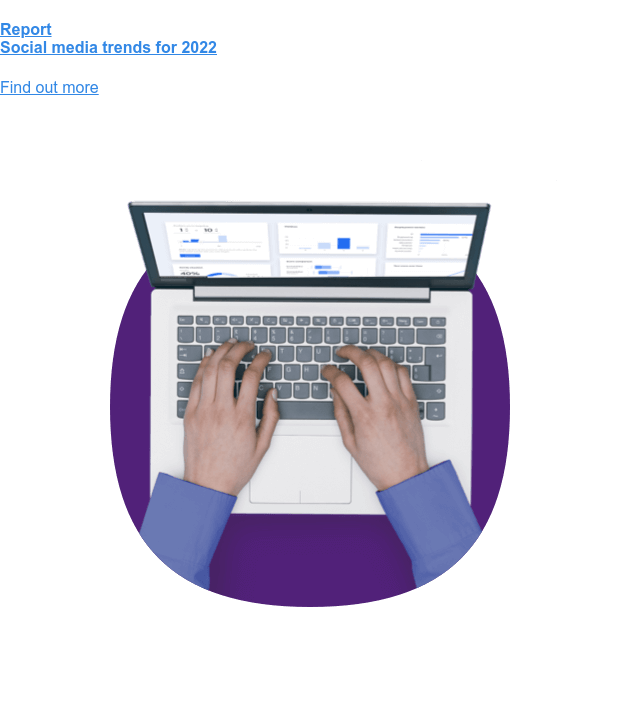