5 key characteristics of US Generation Alpha

Baby boomer, Gen Z, millennials, they get talked about a lot. But what about Generation Alpha? Who are they?

Who are Generation Alpha?

The first letter of the Greek alphabet for the first generation to be born solely after the start of the 21st century. This bunch of 8-15 year olds share their birth years with the ipad, video doorbell, facial recognition, streaming services and 3D printing. No wonder they’re tipped to be the most digital savvy generation.

Despite sharing some similarities with Gen Z and millennials, (there’s a reason they’ve been dubbed ‘mini-millennials), Gen Alpha as a generation are unique in many ways. Interestingly, there are also huge variances between kids across the globe. Between 8-15 is a key age, a period of flux in every child’s life and it varies around the world. So, what’s the stand outs for US Gen Alpha? We’ve taken a dive into the 5 key Generation Alpha characteristics that set kids in the United States apart.

1. They’re focused on their family and the future

Their formative years have been shaped by a global pandemic, so it’s perhaps unsurprising that many of Gen Alpha can be defined by their worries towards becoming ill, and missing out on spending time with family. Compared to the rest of the world, where we’ve seen the opposite, 26% of American Gen Alpha are worried about not seeing their family enough. With more saying this than in 2021, US Gen Alpha’s attitudes towards their family priorities could be a deep-rooted and long-lasting after effect of Covid-19.

By comparison, worries about falling behind at school are down on last year, with the biggest fall in numbers saying this is a concern for them. Instead, US 12-15s are looking to the future, with getting good grades remaining the top attitude toward school, and 43% believing it’s important to go to college.

While it might not be as high a priority for US Gen Alpha as it is for older generations in the rest of the world, climate change and the environment is still important. Caring for the planet is in the hearts and minds of Gen Alpha kids across America, with many increasing their activism to implement sustainable change at a systemic level.

US Gen Alpha don’t have as much control over waste management in their households, but their mindset around this topic is close to that of Gen Zs when thinking about the bigger picture around sustainability. Gen Alpha is looking to their government and brands to lead the charge with climate change and making sustainable products more available to them.

According to the US Census, Gen Alpha will be the most diverse generation in history, and it’s shaping kids’ expectations. They’re looking for representation and inclusivity, and helping people is the number 1 priority for 12-15s in the States. Over 60% want to protect people from bullying and for everyone to be treated the same. These attitudes aren’t based on a Disney-inspired fairytale world, but a long-lasting desire to create a safer world for all.

3 in 10 Gen Alphas aged 12-15 believe it’s important to see all types of people in TV shows and movies.

Representation of ethnic and minority groups in games, TV, movies and media is key for this audience, helping kids in America to feel confident and empowered.

Kids in the US don’t behave like kids globally when it comes to screen time. After Covid, many kids started taking a step back from their screens, but not in the States. Here, it shows no sign of easing off on the gas pedal. Parents are saying their children are using devices more frequently than last year, and it’s impacting on in-person experiences. Gen Alpha kids rank playing video games and scrolling on social media higher than spending time with friends, and joining after school clubs. Sports participation has seen the biggest drop in numbers, with 11% less playing after school and 17% less on the weekends.

And increased screen time is having another negative effect. Compared to the global average, US teens are 41% more likely to say they post everything they do on social media. But 11% less are saying it makes them feel good about themselves and 19% less are saying they think it shows people’s real lives, so while they may be more active, many are having a worse experience.

5. They love a trip to the movies

Going to the cinema is a classic pastime for kids spanning generations, and it’s no different for today’s Generation Alpha. We’ve seen a 39% increase in US 12-15s who say the movie theater is their favorite way to watch movies, a higher number than the global average. With many of the kids of today wanting to keep up with what’s trending, the opportunity to see films as soon as they come out is too good to miss.

But entertainment doesn’t just have to be visual for Gen Alpha.

Many in this generation want to listen to comedy and gaming related podcasts, and they also want to educate themselves, and energize their creativity. Despite a notable rise in screen time, US kids are still finding the time to switch off and simply listen.

With these five key characteristics defining Generation Alpha, brands looking to understand and engage this audience need to match their morals and keep in mind the things that are important to the consumers of tomorrow.

So there you have it, Generation Alpha – the first of its kind, and determined to forge their own path. 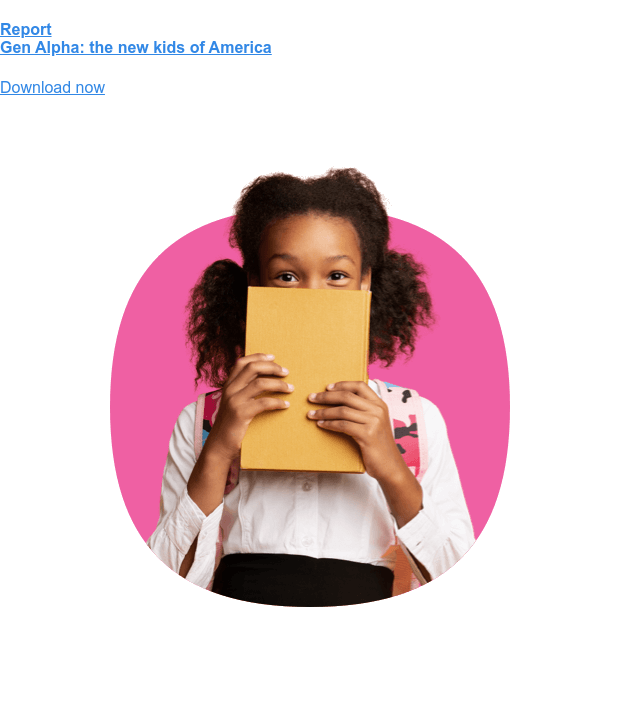