4 insights on Gen Alpha: how their online behaviors are changing

Dubbed by some as “Generation Covid”, the attitudes and behaviors of today’s kids and tomorrow’s consumers will inevitably be shaped by the pandemic.

In the same way millennials were uplifted by the election of the first biracial president of the US, and how Gen Z grew up during the Great Recession, Gen Alpha is also experiencing the world around them in a unique way following Covid-19.

Our trended data on how kids act, think, and see themselves can shed a unique light on what tomorrow’s consumers will care about, and how the aftermath of the pandemic will affect them in the long run.

It’s likely they’ll be feeling more uneasy and apprehensive about their future, and some of their fears will endure more than others.

For example, the number of 8–15 year olds who are worried about getting ill has increased by 10% in a year to 48% today, while fears around falling behind at school or not seeing friends enough have fallen with similar rates.

That’s why we’ve released the second wave of our GWI Kids dataset which explores the attitudes and behaviors of 8–15 year olds. Here we look at some of the key year-on-year shifts to help you see the post-Covid world through their eyes, and design your strategies with tomorrow’s consumers in mind.

This time last year, 6 in every 10 kids were still being home-schooled. Most of the world was under lockdown and social distancing was widespread.

Pretty much all hobbies and extracurricular activities were shifted to the digital realm which meant talking to friends online (43%) during the weekend was much more popular than actually seeing them (38%) in Q1 2021.

But our new wave of research conducted a year later reveals a very different picture.

We now see online interactions decreasing while in-person ones are thriving, with more of Gen Alpha saying they see their friends (43%) than talk to them online on the weekend (39%).

Put simply, despite being surrounded by devices everywhere, kids would rather hang out in person than online on the weekends.

On weekdays, however, Gen Alpha is still more likely to talk to friends online than in-person, though this is driven by 12–15 year olds, 46% of whom do so.

Parents are also less likely than a year ago to say their kids spend a lot of time on devices.

What’s intriguing is these patterns coincide with a surge in device ownership. Gen Alpha is actually more likely to own or have access to smartwatches (+27%), smart TVs (+19%), smart speakers (+12%), and mobile phones (+6%).

Not to mention mobile phones have now surpassed TVs as 8-11s’ most used devices (33% vs 30%). So although the reach of devices is actually increasing among Gen Alpha, their usage is going down.

This isn’t due to parents setting time limits either, which suggests following the pandemic, kids are becoming more aware of their device usage and are embracing opportunities to socialize.

Social media continues to flourish even after most restrictions have been lifted.

This time last year, using social media was Gen Alpha’s fifth most popular thing to do after school, and fourth on the weekend.

Today, it’s more common than both talking to friends online and seeing friends in person.

In fact, when we asked kids what they most spend their time on, there’s a 38% growth in using social media after school, and a 43% increase on the weekend.

If you’re wondering what they’re doing on these channels, the answer is they’re primarily looking for entertainment.

Among 12-15s, 61% use social media to find funny posts and 46% are looking at memes – both behaviors on a growth trajectory.

Learning new dances isn’t as popular (20%) but is also something Gen Alpha are picking up more than last year.

And what better platform to jump on dance and music trends than TikTok?

TikTok has seen huge growth (+18% weekly usage year-on-year) among 13-15 year olds in the space of one year alone.

Scrolling on TikTok is more than a pastime; it represents a cultural shift that can shape a whole generation in the long run.

TikTok and social media’s popularity among today’s kids will have an enormous impact on tomorrow’s consumers’ interests, expectations, and ultimately what will make them tick.

Gen Alpha will likely place more importance on the creative and audio aspects of campaigns and expect highly relevant content that resonates with them. According to TikTok, close to 7 in 10 users say they remember the brand better if it features a song they like in the video.

It’s likely they also won’t have the patience to go through an ad the same way their parents are used to doing on traditional TV.

As Forbes put it, “The fact that TikTok measures each user’s behavior every few seconds and tracks exponentially more content than any other platform, makes the algorithm better and better at serving up what users will like”.

For a brand, living up to this standard won’t be an easy feat, but a focus on sub-cultures can be a winning formula.

However, we shouldn’t ignore the impact these platforms can have on kids’ wellbeing especially when 13-15 year old TikTok users are more likely than the average teen on social to say they care what people think about their profile (25% vs. 22%).

Granted, social media is one of the most effective channels to reach Gen Alpha, but brands should remember to inspire kids with optimism and positivity first and foremost. Looking at them through the standard consumer lens won’t cut it.

3. Podcasts pick up the pace at news’ expense.

As we covered in our Connecting the dots report, news consumption was at its peak during the pandemic. It was the media type people were most likely to consume more of.

Our Coronavirus research conducted during the first wave of the pandemic in mid-March 2020 showed that Gen Z (16-24s) were just as likely as their older counterparts to be watching more news coverage (67%).

But after the initial spike, news couldn’t sustain this engagement; and kids are no exception.

Interest in the news has fallen across the board, with podcasts appearing to fill up the gaps.

General interest in the news has faded too (-17%), and it’s now been replaced by podcasts (+12%), with one in every five teens interested in this medium. Engagement has also grown by 11% in the past year to 24% today.

The growing popularity of screen-free formats like podcasts could be down to the fatigue kids experienced following online education during the pandemic. It’s a trend we’ve seen among adults, suggesting it’s unlikely to be short-lived.

The impact of screen time may well be one of the biggest lasting impacts of the pandemic on Gen Alpha.

They will likely develop a higher awareness of the effects devices can have on their wellbeing, potentially paving the way for a more audio-centered online future.

This is an opportunity for media publishers to explore new formats in the podcast space – not only because teens are increasingly gravitating toward it – but also because of its low barrier to entry.

Focusing on interviews more so than old-fashioned news coverage is essential given interviews are the top trending podcast genre among Gen Alpha, showing a 10% year-on-year growth.

Even better if you can empower them to be a part of the experience. New York Edge, for example, has launched a podcast giving kids the chance to interview leaders in different industries.

Podcasts are now also turning to platforms like TikTok to look for creators in an effort to appeal to younger groups and monetize on influencers’ audiences.

Sports podcast Blue Wire, for example, partnered with internet comedian Druski who has a combined follower count of 8.5 million across Twitch, Twitter, YouTube, TikTok, and Instagram.

It’s not a stretch to say gaming is one of the biggest outlets for Gen Alpha, and probably the biggest one for 8-11s.

Playing games for fun is in fact the most popular activity 8-11 year olds do online (85%), surpassing things like watching videos (82%) and listening to music (57%).

It has a truly cross-gender appeal too. Today, it’s 83% of girls aged 8-11 who say they’ve played games before compared to 89% of boys.

Like most other online activities though, some forms of gaming couldn’t sustain the interest and engagement Gen Alpha had during the pandemic.

Interest in gaming has dropped across the board. Although among 8-11s the drop hasn’t been substantial enough to move it down the ranks and it’s still their top interest, 12-15 year olds have replaced it with an enthusiasm for animals and pets.

Holidays and trips have also replaced computers as one of the most popular interests for Gen Alpha, once again hinting at a rising tension between online and in-person activities, digital and physical worlds.

At the same time though, Roblox has seen astronomical growth.

With its immersive and creative tools, the platform emerged as a form of escapism for kids during the pandemic.

Marketing efforts can also do wonders on this platform. With its “Magic is in the Air” campaign Nike leans on kids’ creativity and imagination to build a presence on Roblox.

Since the launch of “Nikeland” on the platform in November last year, the metaverse store has attracted almost 7 million people – a testament that having Gen Alpha on your side, especially in the gaming realm, is worthwhile.

We’re already seeing signs of how different this generation will be from Gen Z and millennials. The hours spent in front of screens during the pandemic has meant Gen Alpha are now faced with a tension of having to choose between online versus offline experiences as they’re clearly drawn to both.

They have more access to devices, spend more time on social media (and platforms like Roblox), but at the same time, also want to experience the real physical world around them.

For tomorrow’s consumers, this means less attention, but a higher awareness of screen time which can translate to audio formats taking an ever bigger role in their lives. 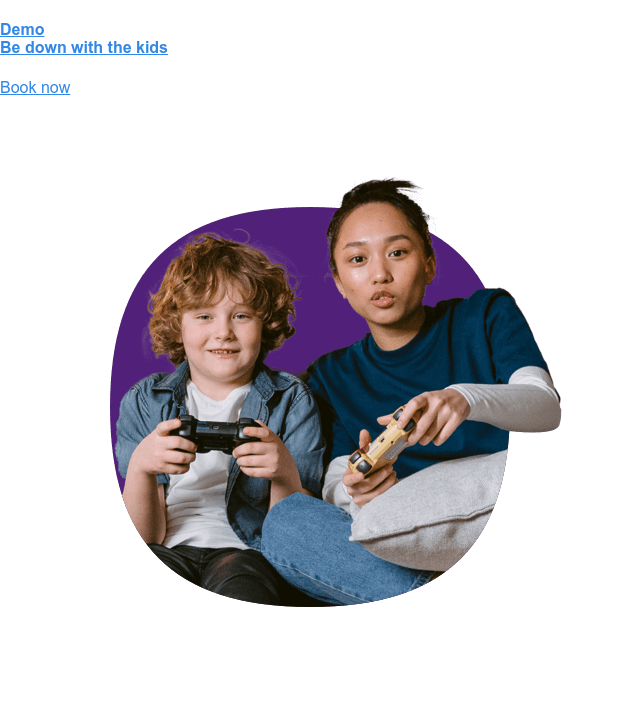