4 Reasons Why the Apple Watch Will be a Success

As Apple prepared to debut its long-awaited watch, the question of whether it would, or wouldn’t, set the market alight was a constant talking point. But while the smart(est) money will probably wait for v2 of the Apple Watch to become available – the one where all of the initial annoyances and shortcomings have been addressed – there can be no doubt that, Apple’s first foray into this sector will finally push it into the mainstream. Quite simply, it’s inevitable that this watch will be a success – and here are four reasons why.

1. It Will Dominate the Smartwatch Market

Apple has a proven track record of making a late entrance to a particular market but then building up a position of real influence or dominance (and often, at a pretty quick pace).

Look at attitudes among current smartwatch owners and all the signs suggest that it’s on course to do the same again. So, while just a quarter of consumers in markets like the UK and USA say they are interested in using the Apple Watch, that figure rockets to over 70% among those who have previously purchased a smartwatch from a rival brand. That’s pretty crucial: those who have already parted with cash for a wearable device – and who are thus sold on the concept itself – are the most interested in using Apple. Of course, interest doesn’t always convert to a sale, but that a lot of current smartwatch owners are about to switch allegiance seems pretty clear. Once again, the power of Apple brand will be in evidence here. 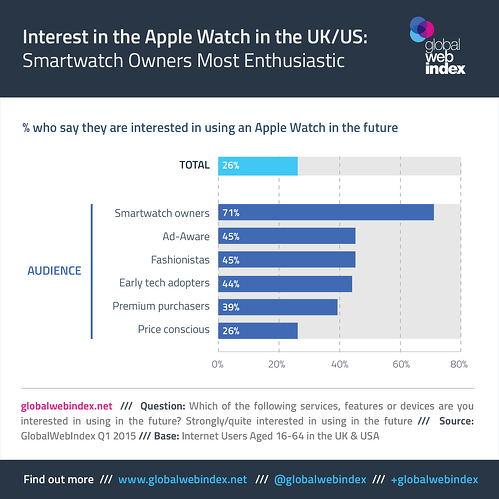 Unlike any smartwatch which has gone before it, the Apple Watch has a large and extremely loyal legion of fans ready and willing to buy pretty much anything that the company releases. When new iPhones are debuted and Apple Stores across the world see long lines of expectant customers waiting outside to get their hands on the new device, it’s existing iPhone and iPad owners who dominate. The upgrade-mentality is especially strong for this brand, meaning that many fans will buy the watch because it’s an Apple product rather than because they were in the market for a smartwatch per se. That comes through pretty clearly in our chart: iPhone or iPad owners are over 50% more likely to be interested in using the Apple Watch than the average digital consumer. 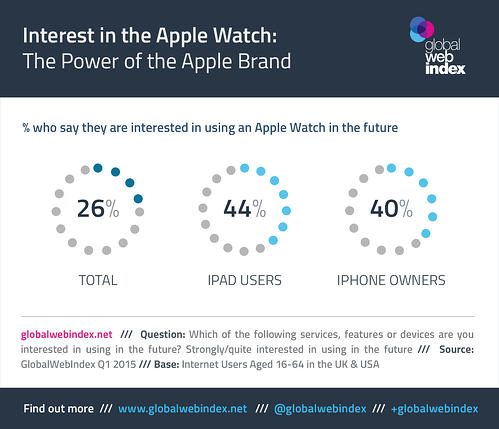 Equally significant is that Apple is the brand that people are more willing to advocate than any other – even some individuals who don’t currently own an iPhone say they would recommend it to others, underlining how aspirational and coveted Apple’s devices can be.

3. The Market is Ready To Be Dominated

Currently, wearable devices remain extremely niche: just 1 in 10 digital consumers own a smartwatch and even fewer of them have a smart wristband. That means the market is anything but saturated. But that’s not the end of the story, here: look at smartwatch ownership on a country-by-country or region-by-region basis rather than at a global level, and the figures are lowest in some of Apple’s strongest territories.

For example, can it really be a coincidence that current smartwatch ownership is lowest in North America (at just 5%), when this region posts the highest figures of all for iPhone ownership (at 26%)? Or that consumers in countries like Australia, Sweden, Japan, the UK and the US are some of the least likely to have purchased a smartwatch to date but are some of the biggest fans of Apple (as well as being some of the most likely to have the disposable income needed to purchase Apple products)? Hardly. All the evidence suggests that Apple fans have been waiting patiently for their brand’s wearable device to come to market. And now their time has come. 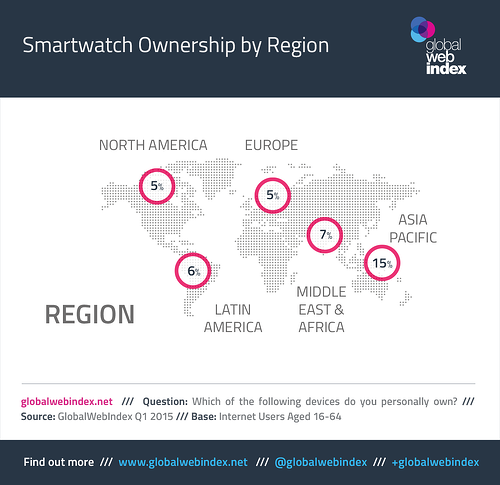 4. The Apple Watch Will be Social

Although initial reviews for the Apple Watch have been relatively mixed, one thing has remained consistent: it’s generally agreed that Apple’s new device – as well as smartwatches generally – can only achieve real success if they convince us to use them in preference to our smartphones for certain behaviors.

Social is one obvious area where this could be true; for today’s constantly connected consumers, the chance to receive notifications and carry out basic social activities without the need to remove a smartphone from a pocket could be a major selling point. And hence, it’s probably not a surprise to see that social networkers and chat app users are some of the most enthusiastic about the Apple Watch. Almost half of those on Instagram or WhatsApp are keen to try Apple’s newest device, for example. But it’s WeChat users who are really leading the charge here, some 75% of whom are interested.

All this is good news for Apple, because if smartwatches are to generate the type of momentum that’s been largely absent so far, social networking simply has to be one of the behaviors which is the first to migrate to these new devices in any serious way. 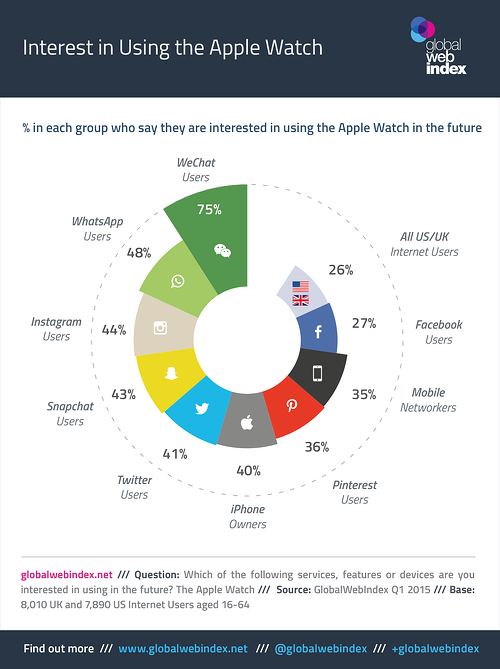