Ever since Apple confirmed its entry into the music streaming market earlier this month, speculation has been rife about what it means for Spotify, the current leader in key territories such as Europe and North America. Will Apple Music kill off the competition? Or, as some industry insiders have hoped, will a rising tide lift all boats? Here are three key things to know in advance of Apple Music launching.

1. Most Spotify users don’t pay for the service

One key omission from Apple’s new offering is a free, ad-supported tier – with users having to go straight to the $10/month subscription service. That helps to explain why Apple is rumored to have been pressurizing music labels into forcing names like Spotify to withdraw their free tiers. But it also shows why Apple faces an uphill battle in terms of poaching current Spotify members: only 3 in 10 existing Spotify users say they pay to use music-streaming services, meaning the vast majority are on its free tier. What’s more, just 17% of iPhone owners, 19% of iPad owners and 22% of iTunes users are currently paid-up members of a streaming service; among both its core and target audiences, then, Apple needs to do a lot of work in order to make the proposition tempting. 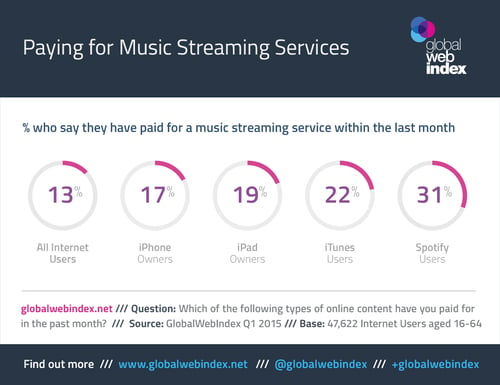 2. Spotify lags SoundCloud in many emerging markets, but iTunes has the biggest global audience

Globally, Spotify retains a slim lead over rival service SoundCloud when it comes to monthly users. And this is a trend which holds true across North America and Europe (the two regions which are observed the most closely when it comes to digital trends), as well as in LatAm.

In APAC and MENA, though, it’s SoundCloud which posts the highest figures – especially in markets like India and Indonesia. That means it’s not just Spotify that Apple needs to have in its sights if it’s going to become the global leader for music streaming.

Significantly, though, iTunes has a bigger monthly audience than either of its rivals in every single world region (and enjoys a particularly pronounced lead in North America). In some places, then, Apple could convert just half of its existing users and still overtake the biggest existing names in this space. 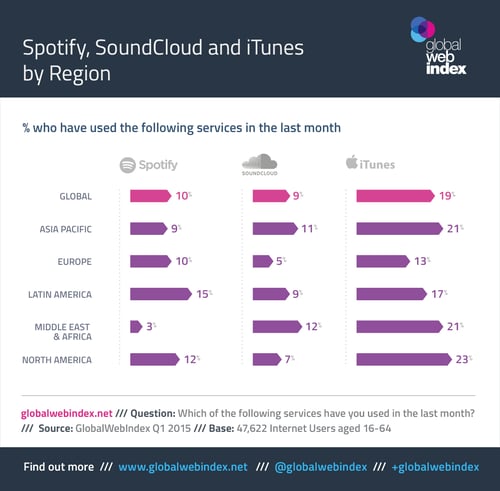 3. Half of Spotify’s users are on iTunes

As Apple looks to poach users of existing music-streaming services, there are huge cross-overs that could work to its advantage. Most striking of all is that 50% of Spotify listeners say that they use iTunes at least once a month. That’s a hefty chunk of Spotify’s current user base who will already be familiar with Apple’s platform and who can be targeted by its marketing machine. It’s a similar story on SoundCloud, where 53% are current iTunes users.

And the even better news for Apple is that there’s much less of an overlap in the other direction: just a quarter of iTunes users are active on Spotify or SoundCloud. 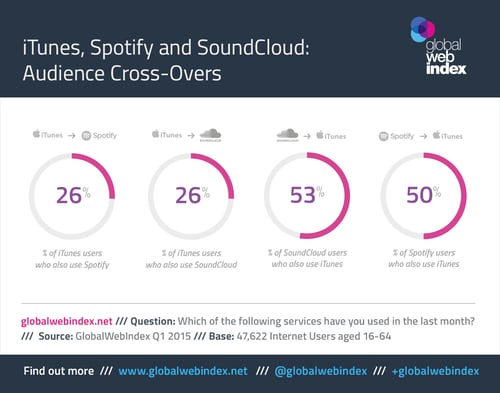