Are Consumers Ready for Virtual Reality?

Virtual Reality has come a long way since Nintendo’s “Virtual Boy” in the 1990s when screens lacked high resolution and accurate motion sensors. 20 years or so later and Virtual Reality might still be in its infancy, but some are betting big that it’s seriously going to impact everything from marketing and gaming to commerce and education.

Indeed it won’t be long before we can strap on a headset and browse car showrooms from our sofas, sit in a virtual classroom, or ride a motorcycle around the streets of Rio de Janeiro. HTC, Oculus and Sony are some of the first names on the scene to convince consumers that VR is ready for mass consumption – but are consumers ready to splash out on these devices?

GWI’s data shows that a decent level of interest in virtual reality has been garnered so far. Across our 34 markets, it’s around 4 in 10 internet users who express interest in using this kind of tech in the future – a figure which could quickly grow as awareness and media coverage expands. Demographics have a big impact, though; the youngest consumers are unsurprisingly the most enthused, and men (on 44%) have a 12-point lead over women. By region, with their younger online populations, APAC and Latin America are set to lead the VR charge, whereas Europe and North America could trail behind slightly (on 29%). Crucially, though, interest doesn’t dip much below the 1 in 5 mark among any of the demographic breaks.

Often the trouble with more-advanced tech like VR is getting it past just being a success among the early tech adopters. Uptake among more tech-savvy audiences like smartwatch owners (62% are interested in VR), and to a lesser extent, console gamers (on 53%) is bound to be decent. But getting VR into the mainstream will be a little trickier. Mark Zuckerberg has even said that it’s likely to be at least 10 years before the technology reaches the mass market.

There are two key barriers at play here. First and foremost is that many consumers could find themselves priced out of the VR market. The expense factor is particularly clear when you look at ownership of other high-end devices like smartwatches, which the top income group are 3x as likely to have as the bottom. The same is likely to be true for virtual reality; for the PlayStation VR, consumers will have to fork out for a PS4 console in addition to the headset itself. While versions like the Google Cardboard offer cheaper alternatives, there’s a chance that the early penetration provided by these could actually hinder VR’s prospects. Many who were unimpressed by the smartphone-strapped-to-your-face approach could be unwilling to give VR a second chance.

That being said, there’s no doubting the potential for virtual reality to shake up how consumers, gamers, and especially brands do things. Facebook is already actively pursuing VR initiatives to make the social media experience more immersive, while eBay has launched its first e-commerce store. Such tech will enable brands to advertise in a more personal and immersive way than they’d normally be able to, offering consumers a whole new level of interactivity and awareness. It may take some time to move beyond its niche status – and there’s likely to be some barriers to overcome beforehand – but in the somewhat near future, the ecosystem will have all the ingredients it needs to grow and thrive. 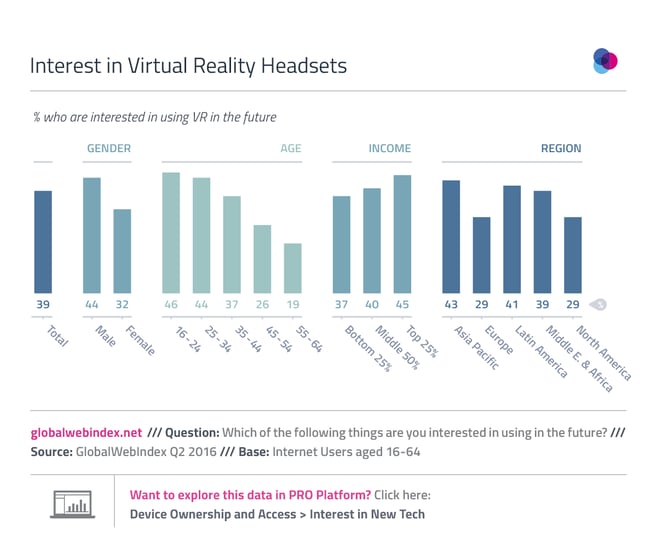