Brexit: The Views of Leavers vs Remainers

The recent EU referendum has already had a major impact on the political landscape, as well as the businesses and brands, of the UK. To help understand the attitudes of voters around this historic referendum, GlobalWebIndex interviewed 2,295 UK online adults aged 18+ between Friday 1st – Thursday 7th July, asking them a range of views about the Referendum, as well as how they voted and what they would do in any future vote. All parts of the UK were represented in our sample, which was also weighted to be representative of the age, gender and education profile of the UK internet population. The results emphasize how polarized the opinions of voters remain and also suggest that if another referendum was held on EU membership, we may see a different outcome.

In a new referendum, 1 in 10 Leavers might vote differently

GWI’s research shows clearly that if a second referendum were to take place, the overwhelming majority of Leave and Remain voters would back the same side as before. Significantly, however, it’s nearly 1 in 10 Leave voters who might switch sides or who are now unsure. In contrast, only 4% of Remain voters say the same.

Equally important are the non-voters in the June 23rd referendum – 31% of whom would now back Remain, compared to just 17% who would vote Leave. Given the close-run nature of the first referendum, this strongly suggests that another one could produce a different result, with Remain prospering. 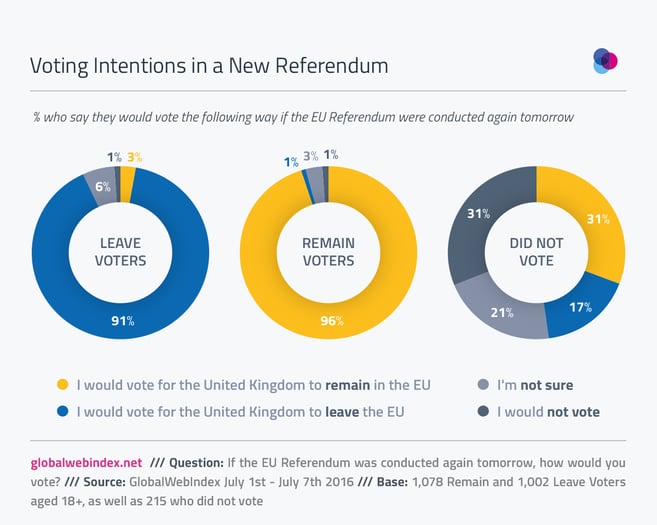 Unsurprisingly, 75% of Remain voters wish there had never been a Referendum in the first place but perhaps more interesting is that 1 in 10 Leave voters feel the same. Similarly, it’s 2 in 10 Leave voters who believe they were misled about claims surrounding issues such as the NHS and immigration.

Even so, the vast majority of Leave voters believe that people are over-reacting and that everything will be fine in the end – a view shared by just 17% of Remain voters. The only attitude where we find universal agreement is for people being upset about the stories of attacks and abuse that have taken place since the results were announced. Nevertheless, the Leave voters are still notably behind the Remain voters here. 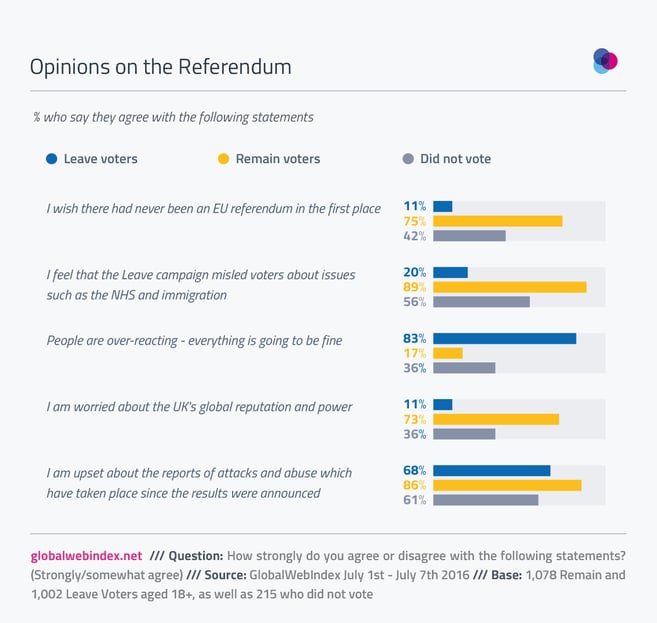 When GWI asked voters why they voted the way they did in the EU referendum, a belief that the UK could exit the EU but still access free trade was by far the biggest motivator for Leave Voters – 94% thought this would be the case, suggesting they think the UK can retain one of the biggest benefits of EU membership even from outside.

The desire to regain power from the EU was also a big factor, being cited by 3 in 4 Leave voters. Meanwhile, about 6 in 10 Leave voters believe there is too much immigration and that the UK contributes too much to the EU.

However, the vast majority of Leave voters made up their own mind rather than being influenced by others – only 14% said they were convinced by the arguments of Boris Johnson or Nigel Farage, and just 3% said they were influenced by friends or family who were voting Leave. But significantly, 4 in 10 Leave voters believed the pledge that money contributed to the EU could be spent on the NHS instead.

For Remain voters, the economy was also the biggest factor, with 7 in 10 believing the UK would be economically stronger in the EU and 61% saying they wanted the UK to have access to EU free trade. Also, 55% said they were outright scared by the economic impact of leaving.

After the vote, the majority of Remain and Leave voters do not currently feel positive about the UK’s economic situation. However, it is 42% of Leave voters who feel positive, while more than two thirds of Remain voters (68%) say they have a negative view. 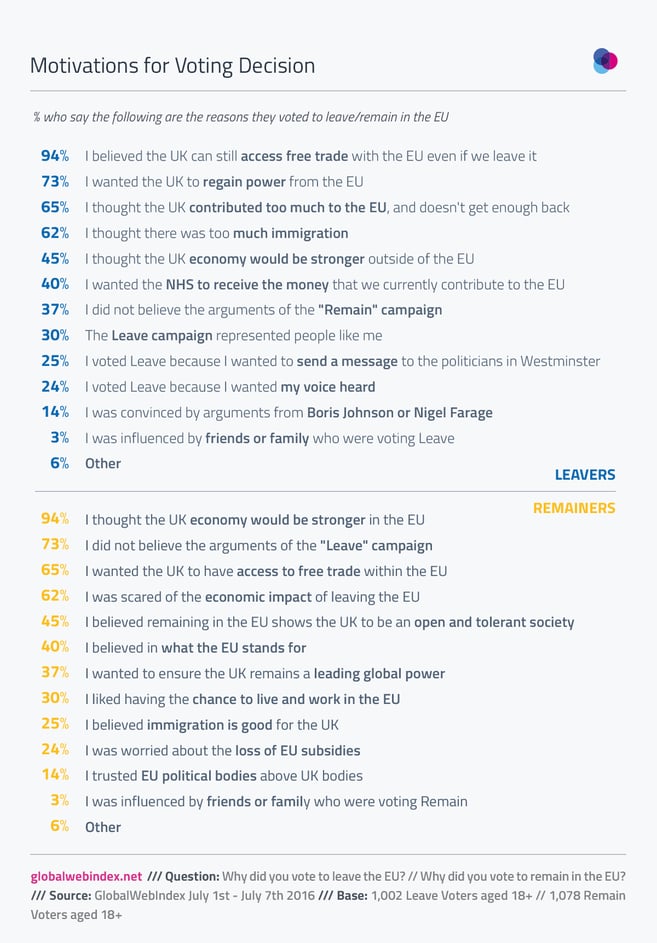 1 in 2 Leave voters want to exit right now. 40% of Remainers want another referendum

The vast majority of Leave voters believe that Article 50 should be triggered, with almost 50% saying it should happen straight away and a further 4 in 10 wanting a new Prime Minister to be in place and then the process to begin. Only 5% believe there should be another referendum, and not a single Leave voter we surveyed believes that the exsting result should be ignored.

Among Remainers, only 30% are in favor of the UK triggering Article 50, whether now or when a new Prime Minister is in place. In contrast, over 40% want another referendum and more than 1 in 10 believe the existing result should be discounted. Clearly, the opinions of these two groups are as divided over the implications of the referendum as over the vote itself. 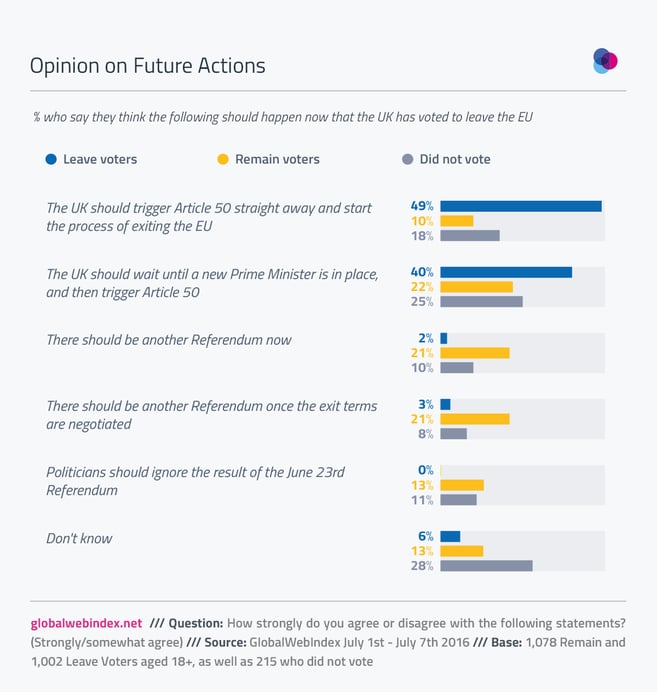