As social media continues to command ever larger slices of advertising budgets, many are asking the question – do social ads have the capacity to replace online ads? Certainly, the potential reach of social ads is undeniable – globally, it’s over 90% of online adults who are using social media and social networking is now taking up 30% of total daily online media time. What’s more, with many commentators seeing sponsored social posts as one solution to the threat of ad-blocking – at least for now – this has made social ads a crucial addition to any marketing campaign.

So it’s no surprise that we’re seeing major (if belated) developments in the world of social advertising –  Snapchat is rapidly developing its ad serving capabilities, Pinterest’s Promoted Pins are gaining traction and Twitter continues to introduce new features for advertisers. But it’s Facebook (and ergo Instagram) that has taken the lead with Atlas, its ad-serving and campaign management platform. With Atlas, Facebook has developed an infrastructure to rival that of Google’s DoubleClick, and is able to leverage the wealth of information available from Facebook’s ecosystem to serve a much broader range of ad formats compared to the standard online ad.

This development of social advertising is reflected in GWI’s figures – 15% of internet users say they click on at least one online ad each month but it’s now an impressive 12% who are interacting with sponsored social posts. Age-based differences very important here, however – for the 16-24 age group, figures for engagement with online and social ads are on par. There are also some clear trends from a geographical perspective, with some APAC markets, more notably China and Singapore (where social commerce has already taken off), posting figures for sponsored social posts which are equal or surpass that of online ads.

Significantly, there are also clear opportunities to integrate social ads with two of the other major growth areas in digital adspend – mobile and video. Almost 8 in 10 internet users are social networking via mobile and it’s now almost 6 in 10 Facebookers who are watching videos on the platform each month, with more than a fifth sharing posts from a company or brand.

In reality, it’s unlikely that social ads can replace online ads – what’s important is how they can both be used to complement each other in any marketing campaign. But once the potential of social ads is fully realized and the underlying infrastructure between platforms fully developed, the opportunities created by social ads to deliver diverse, engaging and relevant content will be abundant. 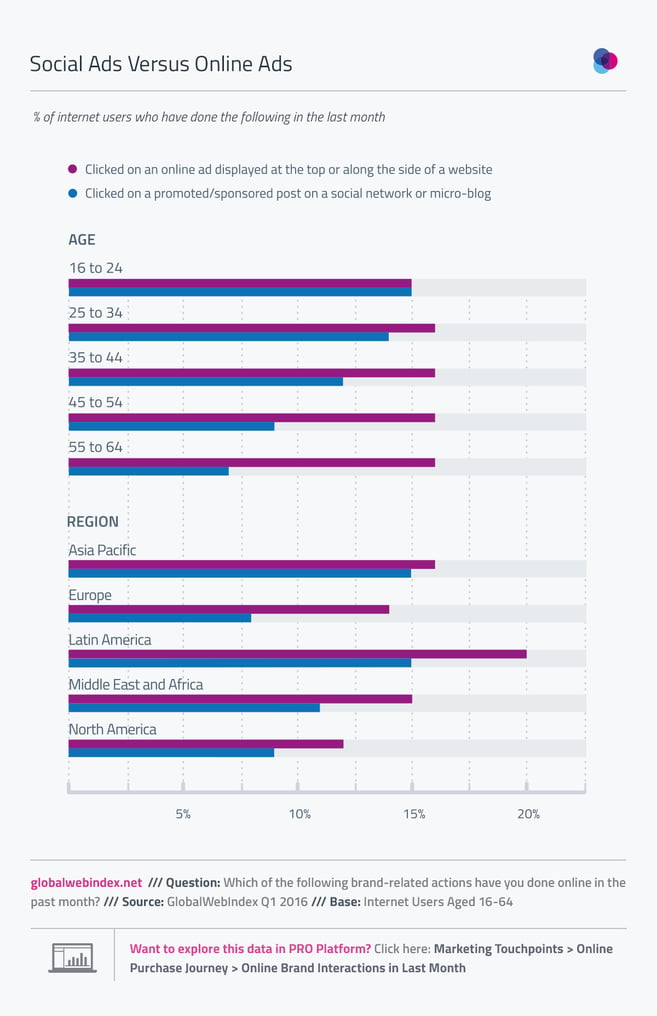