4 Things Every Marketer Should Know About Generation Z

Millennials make up the largest part of today’s workforce and are one of the most talked about generations in marketing.

Consistently perplexing the industry, plenty of research has been conducted to help brands better understand and relate to this audience.

But as this generation enters a new stage, what about the new kids on the block – the Generation Z consumers of today who will soon be wielding their spending power?

Marketers have labelled this new audience ‘

Gen Z’ (defined here as internet users aged 16-20). This group is coming on the scene with their own unique set of attitudes and behaviors, more immersed in the online world than their ‘complex’ predecessors.

But what makes this audience so different, and what do marketers need to know?

Smartphones are central to their lives.

Born into a high-tech and highly-networked world, Gen Z are the first to be raised in the era of smartphones.

With these devices likely to be one of the first they ever owned, it’s not too surprising that they have become central to their online lives.

Virtually every single ‘Gen Zer’ (96%) has a smartphone who spends an average of 3 hours 38 minutes online each day on these devices – a considerable 50 minutes longer than the global average.

This means that they’re spending more time online via mobiles than they are on PCs, laptops and tablets combined.

Gen Z spend longer online on their mobiles than they do on PCs, laptops and tablets combined.

That said, a mobile-only strategy may not be optimal here.

This group is still accessing the internet through PCs, laptops and tablets for an average of 3 and a half hours a day, with Gen Zers moving across different screens throughout the day (as the majority of internet users tend to do).

Marketers should certainly be thinking mobile-first, but a multi-device strategy is what’s needed to fully engage these consumers. 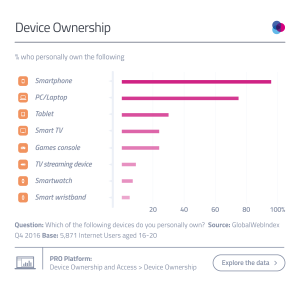 Every day, the average Gen Zer spends one hour and 11 minutes watching online forms of TV.

This is an audience who have come to age in a time when it was normal for content and services to be available on-demand.

Rather than having to wait for a certain time of day to watch their favorite TV shows, through services like Netflix, they have a whole host of relevant content to watch whenever and however they please.

Rather than having to wait for their favorite TV shows to air, they have a whole host of relatable content at their fingertips.

With 50% saying they like to binge-watch TV shows, and 1 in 4 using Netflix each month (rising to 70% among those in North America), this is undoubtedly something that resonates strongly with this young audience.

Ultimately, this generation could be pivotal in the shift in TV attitudes, so it’s vital that marketers take note of this. 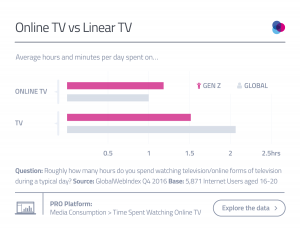 Generation Z are big on entertainment and, unsurprisingly, big on video. Almost half say that entertainment is a very important reason for them to go online, and TV, music and gaming are among their strongest interests.

Whereas millennial teenagers were predominantly using social media to update their statuses and to see what friends were doing, for Generation Z, entertainment is a key reason why they use social platforms.

Take a look at their top social media platforms and this is particularly apparent.

With a 10-point lead over Facebook, YouTube can claim a reach like no other; almost every single Gen Zer has visited or used the platform in the past month.

YouTube can claim a reach like no other – almost much every single Gen Zer has visited or used the platform in the past month.

There’s often talk that Facebook is losing its relevance among the youngest consumers, but a glance at the figures shows that’s simply not the case.

Almost 9 in 10 are still visiting or using Facebook each month, while 3 of the top 4 platforms are owned by Facebook.

Facebook remains the hub that underpins and drives social activities, and although its challenge is to keep people posting content, consumers only need to visit to be served ads. 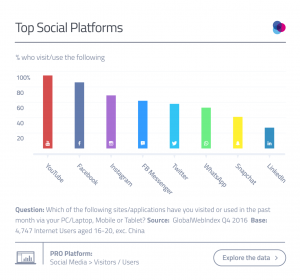 Generation Z are a marketing-aware generation. They’ve been marketed to their whole lives – not just via linear advertising but also through the likes of social media and ‘vlogging’.

But it’s influencer marketing that has the potential to make the most impact among this audience.

Over a fifth are watching YouTube videos posted by celebrities or vloggers each month.

From Diet Coke partnering with Taylor Swift, to Unilever employing Zoella for its ‘All Things Hair’ YouTube Channel, influencer marketing is bigger than ever.

Gen Zers are particularly engaged with this sort of brand promotion: Over one fifth are watching YouTube videos posted by celebrities or vloggers each month and more generally, they’re 50% more likely to be using social media to follow celebrities.

And with celebrity endorsements and vlogs being the two brand discovery channels where they over-index the most, it’s clear that this group is hugely receptive to influencer marketing. 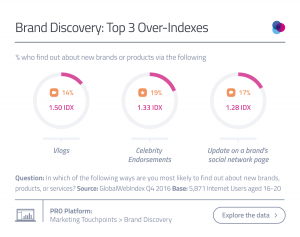 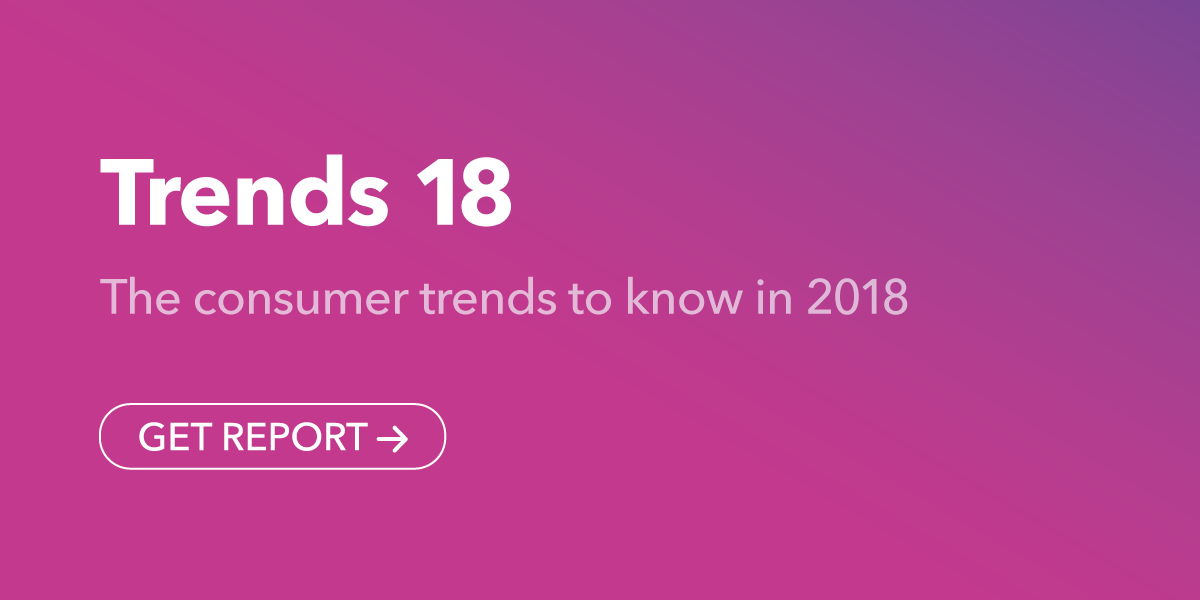