With the Euros kicking off last week, many brands and sponsors are showcasing themselves on the European mega stage and betting big on the tournament. Little wonder considering its reach globally; 4 in 10 internet users report watching the Euros on TV or online, with consumers across each of our 34 different markets tuning in. But whether it’s looking to see what friends are saying about a game, what pundits are predicting for the second half or searching for information about a certain player, second screens are going to challenge televisions for the attention of Euro viewers.

Certainly, Euro fans across the world will be reaching for their devices while watching games – close to 90% of Euro Viewers report using another device while they watched TV recently and 60% are using mobiles to dual-screen. So what are the best ways to reach these fans and what are they doing while dual-screening?

Chatting to friends and checking social networks are top of the list here, with many Euro viewers clearly looking to connect with other fans, see friends’ reactions to the matches in real-time and feel the adrenaline of the global crowd. Around 4 in 10 Euro viewers report chatting on messaging services or social networking while they second-screened – a behavior which is most prominent among the youngest fans.

Twitter has a major opportunity here. Live-tweeting and reactions from sports broadcasters and journalists means that Twitter is a natural go-to for live sports commentary and updates. More than half of this audience are using Twitter, making it the fourth most popular network among this group. And with 1 in 5 of those on Twitter saying they have recently tweeted about a TV show they’re watching, the desire to be part of the big conversation is clear.

However, what’s striking here is that the top second-screen activities tend to be a distraction from the content on the main screen, rather than a complement. Relatively few Euro viewers are engaging with the online content of the TV show or using official apps, and less than a quarter report searching for information related to what they’re watching. Although the desire for supplementary, real-time content linked to the action is there to an extent (and these being areas where Euro viewers over-index most strongly), it’s clear that news channels, social networks and chat apps are where most will be heading.

Second screening will undoubtedly create more views to advertise against, but that’s not to say football fans are necessarily going to be receptive to ads or looking for products to buy during those 90 minutes. It’s up to brands to generate engaging content related to the big screen, and create the right conversations that will be appreciated by football fans – without getting in the way of these fans accessing the commentary and news they want. 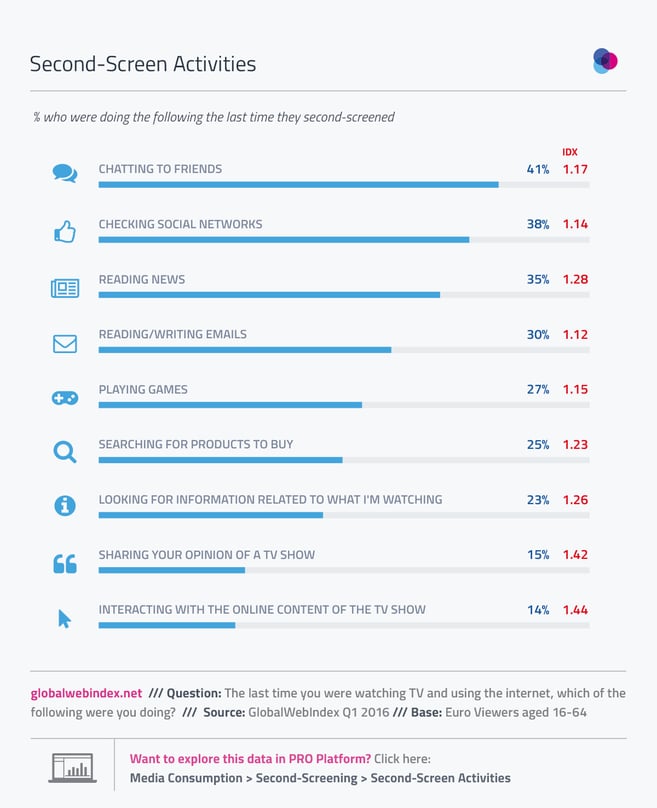