Is Social Media the Next Step for Sports Broadcasting?

From Twitter’s deal to broadcast Thursday night NFL games, to Snapchat signing a content deal to show highlights from the Rio Olympics, sports broadcasters and social networks are clearly betting on the potential of social video. As yet, live sports remain one of the last mainstays on TV to stay relatively unchallenged by the advent of digital, but as social video starts to look more and more like TV, is social media the next step for sports broadcasting?

The rise of online TV has been one of the big stories of recent years, offering people the ability to access the content they want, whenever they want. Each day internet users devote 0.77 hours to online TV – a marked increase on the 0.58 hours seen back on 2012. Online has also made some real headway when it comes to sporting leagues and competitions. As many as 1 in 4 self-confessed sports fans watch the FIFA World Cup or UEFA Champions League online, and with the Summer Olympics coming up, it’s highly relevant that a fifth say they watch Olympics coverage on the web.

That said, self-confessed sports fans are still at least twice as likely to be tuning in to sporting competitions via a television. For sports, it’s perhaps inevitable that online is going to struggle against broadcast TV. There is a clear importance attached to watching sports games live rather than at a later date on catch-up services, and the social aspect of watching games in groups tends to command a larger TV screen. So why are the likes of Sky, BBC and NBC banking so big on social video and sports?

First and foremost, social networks like Facebook and Twitter have extensive potential audiences for sports broadcasters to tap. As many as 82% of internet users outside of China have a Facebook account, and a considerable 8 in 10 visit the network on a monthly basis. So, with a truly global reach and the highest usage frequency rates among all social networks (GWI’s research shows 75% of Facebookers are logging-in daily), Zuckerberg’s network appears well-placed to become a natural hub for online sports video. Likewise, Twitter can boast a strong appeal among self-proclaimed sports fans – more than half of whom visit the platform each month.

What’s more, GlobalWebIndex’s data shows that considerable numbers of social networkers are already turning to the web to watch sports coverage or highlights. More than two-thirds of Twitter users report doing so each month, and figures reach as high as 70% among Snapchatters. Given that networks like Twitter are already go-to points for sports discussion and live updates, their potential to likewise become important hosts of sports coverage and highlights is clear.

And the recent inclusion of live video on Facebook has been the icing on the cake for broadcasters hoping to get their content in front of as many people as possible. Watching and sharing video has emerged as a mainstay activity on social networks, and Facebook, in particular, has been at the forefront of this. Over half of Facebookers watch videos on the network each month – and with figures remaining above the 50% mark for all the age groups, and reaching even higher among sports fans, the potential reach of social video is plain to see. That’s not to say that social media will wholly-replace traditional broadcast sports, though – for the foreseeable future at least, social video’s role will be as a complement to broadcast. But there’s little doubt that the worlds of social media and live sports will become ever-more intertwined as social video moves away from short user-generated clips to the live-streaming of major events and rights properties. 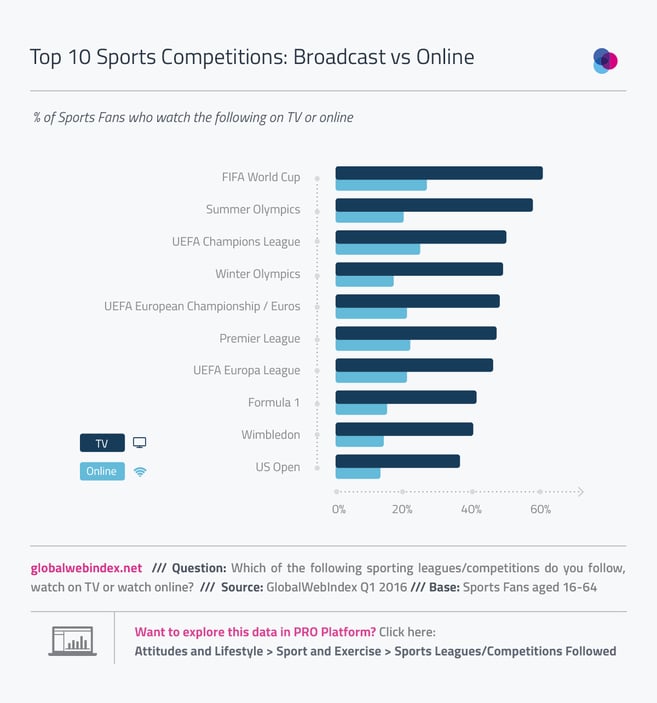