Make OOH work for you: four insights for more impact

For the past two years rush hour has been a memory rather than a reality for many people.

And while increasing numbers of commuters are slowly heading back to the office, the arrival of hybrid working will inevitably impact the whole out-of-home (OOH) advertising ecosystem.

The good news is OOH is well-placed to ride this out thanks to programmatic campaigns.

At GWI we recently launched our own “We know who” outdoor campaign across London and New York. We’ll share insights on how this worked for us as soon as they’re available.

In the meantime, we present a series of practical insights on OOH today, together with an overview of our own recent OOH campaign.

Although 72% of people across 9 markets say they’ve returned to the office in some way, public transport use is still pretty modest compared to pre-pandemic levels.

Our global data shows a steep decline in the number of people using trains or buses on at least a weekly basis – down from 40% in 2019 to 33% today.

This is largely due to hybrid working, with 37% saying they’d ideally visit their workplace just once or twice a week as part of a hybrid working package.

Another aspect is a shift in the types of transport that post-pandemic commuters prefer.

For example, pre-pandemic Japan was the only country in the world where trains were more popular than driving (43% vs 37%). Today that’s reversed, with 40% driving compared to 33% taking the train.

Similarly, walking is surging in popularity for commuters, overtaking buses in India and car-pooling in the US.

If all that sounds a little discouraging for OOH advertising, our data suggests otherwise:

The key takeaway is that just because trains and buses might not be commuters’ first choice anymore doesn’t mean they’ll miss your OOH ads.

The data speaks for itself, with brand discovery via billboards or public transport picking up (albeit a little slowly). And where brand discovery goes, marketing spend must follow.

According to the Out Of Home Advertising Association of America, the industry’s revenue grew 38% in Q3 2021 compared to the previous year.

This impressive recovery is mainly driven by digital OOH ads. These enable brands to be both more creative and strategic in their targeting, and also track performance and explore omnichannel opportunities with other digital media.

We predict that integration with social media, for example, will become an increasingly effective way to amplify the impact of outdoor campaigns, with our data showing that people who discover brands via OOH are 28% more likely to research them on social.

Despite being one of the more traditional forms of advertising, OOH has a unique resilience to the challenges affecting other channels.

It doesn’t have to worry about cord-cutters, channel switchers, or regular ad-blockers, who currently make up a quarter of the online population.

Couple this with the ability to measure ROI and optimize in real time (just two of the benefits that programmatic advertising offers), and you’ve the perfect blend of traditional and digital.

But there’s more. A quarter of all commuters admit they’re more likely to notice OOH than online ads, while younger groups are more likely than their older counterparts to say OOH ads are more creative and memorable.

With that in mind it’s hardly a surprise that digital OOH advertising has grown by over 50% since Q3 2020, largely through major brands getting in on the action.

For example, Mercedes-Benz used its first-party data to drive smarter targeting and extended reach for its outdoor electric SUV campaign, making effective use of existing data it.

As a result almost 4 in 10 of the target audience took a test drive with the new SUV.

The benefits of digital channels – like forecasting, optimization, and measurement – are what makes programmatic OOH ads such an attractive option.

That said, brands need to walk a fine line between attention-grabbing and merely intrusive. The crucial thing is to avoid OOH creative ever becoming a public nuisance.

2. OOH ads work for all types of transport.

Brands with modest media budgets might be wondering where to place their OOH ads to get the most impact. The good news is that OOH works remarkably well across all transport types, with adverts on buses consistently standing out.

Our data shows roadside ads are remembered by 46% of commuters, followed by ads on a bus, bus station, or a bus stop (38%).

In fact bus commuters are the most likely to recall ads specific to their main form of transport (61%), beating rail commuters recalling ads in stations (58%) and pedestrians recalling ads at street level (44%).

Bus ads are effective across different transport types as well. For example, cyclists are almost as likely to remember roadside ads (52%) as they are bus ads (50%).

To really get through to your audience you need to know how they commute and what they’re up to while on the move.

Most of them listen to music (44%), often combining that with other things.

For example, 38% of those listening to music also browse social media while on the move, and a third look around at their surroundings. In fact a consumer’s surroundings attract almost as much of their attention as social media (29% vs. 32%) while traveling.

This means the best way to benefit from “commuter commerce” is to grab their attention via an outdoor or public transport ad, which then draws them into a connected social media campaign.

That’s something Swimwear company Andie has mastered in its latest campaign, showing that DTC brands can thrive by combining traditional forms of advertising with a strong social media presence and influencer marketing.

Our GWI Work data suggests a long-term shift in the amount of time people spend in their local areas.

In fact 75% of professionals across 17 countries will have some form of remote working arrangement in the future.

Leaving local areas and smaller towns out of their OOH coverage means brands risk missing out on a big pool of WFH-ers with substantial purchasing power and influence.

At the same time, capturing the attention of highly diverse remote audiences is never easy. Brands need to step up their outdoor game and recognize the fact commuters have completely different routines to remote workers.

For example, adverts around local parks and gyms might work best for targeting WFH Gen Zs, who’re 35% more likely than the average remote worker to go to the gym and 30% more likely to exercise outdoors before work.

The bottom line is although people won’t stop commuting, the future is increasingly local. To benefit from this brands need to know exactly where their customers are and start experimenting with local campaigns to get through to them.

A great example of these ideas in action is our recent “We know who” brand awareness campaign.

As we evolve we want to grab people’s attention and spell out exactly who we are and what we do.

To achieve that we needed something that felt different, ownable, shareable, and with an edge that made us very slightly nervous. If it didn’t meet that last criteria we knew we were playing it too safe.

In particular, the campaign needed to increase GWI brand awareness, helping us stand out and build an emotional connection with audiences.

The campaign concept that we landed on poses a series of questions about issues that are front of mind, asking the viewer “Who cares about X?” – before giving them the answer, “We know who”.

Presented across hundreds of static and digital billboards in London and New York, including gigantic spectaculars in Waterloo Station and Times Square, the campaign sites were chosen with care.

The idea was to reach people as they go about their lives now the working world has changed. In London we used digital screens in mainline stations, as those are still hubs for commuters and travellers. We used crosstrack ads across the whole London Underground network rather than just around central London, ensuring maximum exposure amongst people no longer coming into the city. We added roadside units further out of London to reach people making journeys by car, and we used static billboards in local neighbourhoods so you might see them when walking to get a coffee or visit the shops.

Our approach in New York was much the same. We used bus shelters and digital newsstands across Manhattan and out into Brooklyn, and digital panels across the entire subway network.

In both cities the campaign made maximum use of location to reach people in the wake of Covid, grabbing their attention to raise our brand profile. 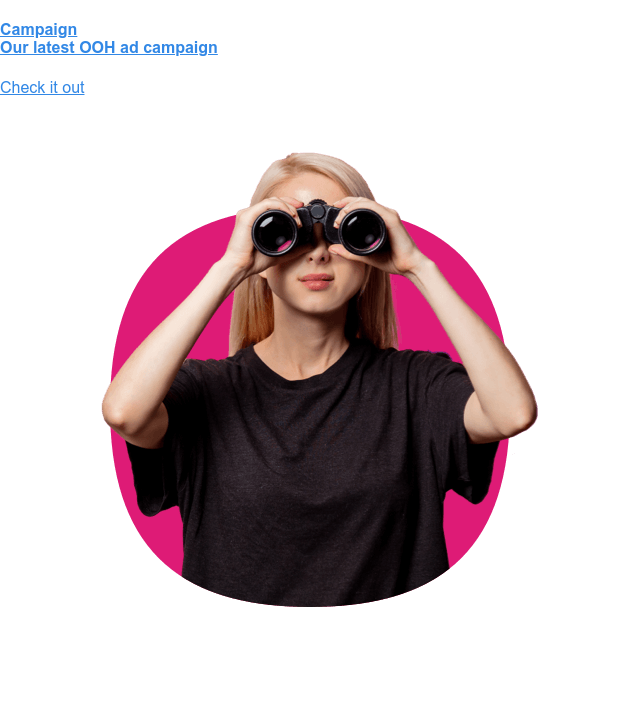