Could Social Media be the New Home to TV?

It’s old news that TV behaviors are seeing some big changes. Netflix is now a household name across much of the world and we’re hearing more and more talk about the rise of ‘cord-cutting’.

While the big screen might retain a key role for some time, if you’re not watching TV through an online provider now, it’s only a matter of time until you are. But what about watching your favorite TV shows on the social platforms that you visit each day?

The Leap to Social TV

From ‘YouTube TV’ to Twitter’s deal to live-stream games from Major League Baseball and the National Hockey, the biggest social networks are all hoping to get their own slice of the vast revenues that Netflix and Amazon generate from their online TV content.

The leap into this competitive market will be difficult but, for companies with deep pockets, these deals have serious potential.

As mobile connections continually improve and as the mobile internet captures a bigger share of time spent online (our data shows that mobiles are now capturing 44% of total online time), it makes sense that consumers will increasingly see appeal in watching videos and TV shows on-the-go via the social platforms that they’re already using each day.

Our research shows that there’s already a third of internet users who are using social media to find entertaining content, and if you take a look at the average Facebook newsfeed it’s clear that the social video boom has already taken place.

With ‘watching a video’ now one of the top behaviors across Facebook, Instagram, Twitter and Snapchat, Nicola Mendelsohn’s proclamation last year that Facebook ‘will definitely be mobile and probably all video’ in five years’ time is now more imaginable than ever.

Over 50% are Watching Sports Online

Sports broadcasters have been among the first to jump on the social-streaming bandwagon. The TV and sport industry have had to become less reliant on millions paying to watch it on the big TV screen and instead offer fans other ways to keep up with the action – namely by providing content and highlights across social media.

It’s certainly promising news for Facebook, Twitter and the rest that as many as half are watching sports coverage/highlights online – and there’s room here for them to make serious inroads after Netflix announced it was not interested in hosting live sports content.

The migration to social TV is not necessarily that clear cut, however. For sports there is still a clear preference for watching games live on a big screen.

Take the Premier League, for example: globally, GWI’s data shows that there’s still a much larger proportion watching matches on TV (26%) than online (15%). And it’s a similar story for TV more generally; sure, half are watching TV on-demand or via catch-up, but it’s a much higher 73% who are watching TV live as it’s broadcast. 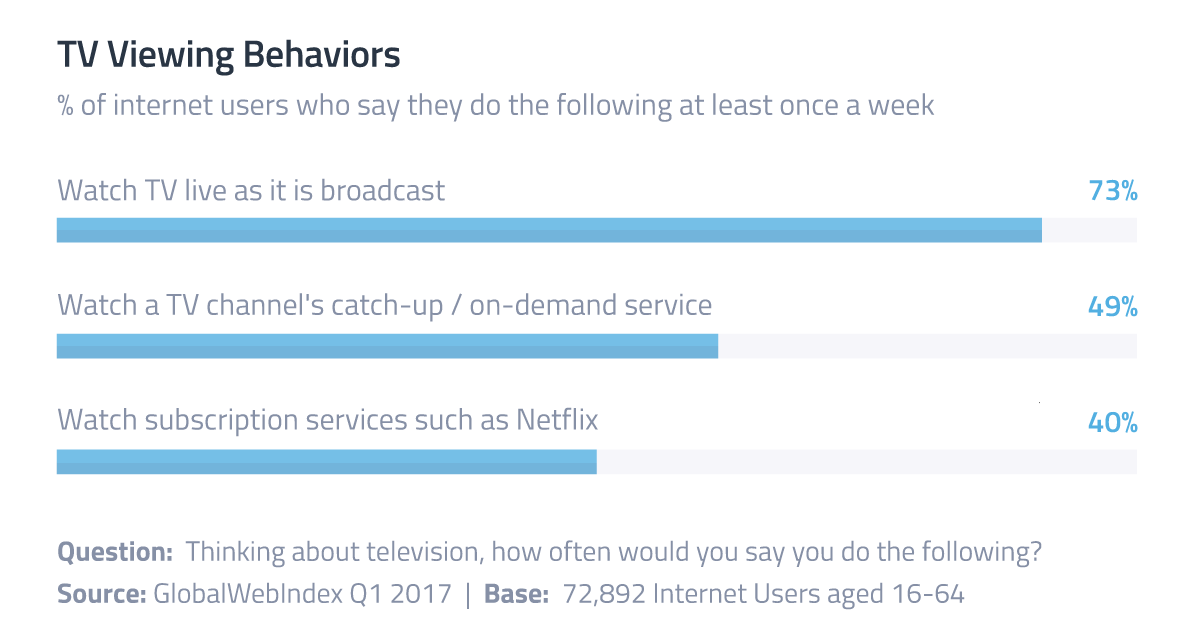 But with mobiles rising in importance, and video gradually taking over social media, it’s not hard to see how TV could easily transfer over to the platforms that we’re always using.

Consumers have come to expect content to be available whenever and wherever they please – so it’s vital that content providers respond to this with a multi-channel presence.

For marketers, the potential opportunities of that shift, both in targeted, affordable advertising, and increased reach, will be huge.