Quite often dismissed simply as busy professionals, with considerable spending power and family-oriented values, this generation saw the technological revolution hit its stride with the likes of 0G cell-phones, MTV and the birth of the internet.

Our data reveals the truth behind this ‘forgotten’ generation by highlighting the facts and breaking the common misconceptions about their online habits, sure to give you the upper hand when targeting them.

Despite arriving late to the social media scene, they’re rapidly catching up with the millennial and Gen Z audiences that preceded them to these platforms.

Gen Xers average just over 2 hours a day on social media, with those in MEA and LatAm being the heaviest users (at around 3 hours). Of this audience, female Gen Xers spend the longest amount of time here, clocking an average of 2 hours 15 minutes a day, a quarter of an hour ahead of males.

Despite spending less time on social media each day than millennials, by roughly 36 minutes, this difference is gradually shrinking, having fallen from 48 minutes in 2018.

Facebook might see the highest membership from this audience outside of China, but, since late 2015, Instagram and Snapchat membership has almost doubled. Meanwhile, TikTok, though far more popular among Gen Zs, is also beginning to take off.

One of the reasons why Gen X’s social media time is still on the rise is because they’re less keen than their younger counterparts to jump on the digital detox bandwagon.

While younger audiences are actively trying to regulate their digital activity – nearly 3 in 10 millennials and Gen Zs track their screen time each month –  only 1 in 5 Gen Xers have done the same.

When on these sites, 4 in 10 Gen Zs fill up their spare time or search for funny content, while Gen Xers still flock to their social accounts with a greater emphasis on socializing.

Over 6 in 10 Gen Xers agree the internet makes them feel closer to people.

This is also evident from their most important reasons for using social media.

These sites allow them to stay in touch with friends (35% say this), network with others (28%) and share their photos (27%). In fact, 1 in 4 say they use social media simply because a lot of their friends are active on it.

So how can brands target them on these platforms?

Given the influence active users can have on other like-minded individuals, Gen X are an important audience for brands – with over 1 in 3 following brands they like on social media.

While they spend significantly less time on social media than Gen Z, the likelihood of them discovering new brands via comments or recommendations on these platforms shows little difference (24% of Gen Z and 22% of Gen X typically learn of new brands in this way).

Sharing near-equal methods of brand discovery on social media, Gen X and Gen Z brand interactions here are beginning to catch up too  – 18% of Gen Zs clicked on a promoted social network post in the past month, compared to 15% of Gen Xers.

In general, just under 6 in 10 Gen Xers say they regularly inform friends and family about new products. As such, social media makes the perfect space to do this –  just shy of 1 in 5 Gen Xers used a “share” button on a website in the past month.

As Gen X further encroaches on the online space formerly dominated by younger audiences, realizing the potential of their influence here is crucial.

But they’re not replacing these audiences, they’re carving out a reputation as digital individuals, following brands and each other with the intention of spreading the word wherever they can.

Just as they’ve caught up with the social media revolution, they’re making strides toward new media and devices in general, giving marketers the chance to reach them in new places.

In 2015, Gen Xers spent just under 4 hours a day using PC/laptops, 35 minutes ahead of Gen Zs. But now, despite being the first generation to experience these devices as the norm, their use of these devices has fallen to around 3 hours and 18 minutes and on a par with Gen Zs.

Instead, they’ve flocked to smartphones. Since 2015, the average time spent on this device by Gen Xers has climbed from 1 hour 52 minutes, to 2 hours 45 minutes everyday – a far cry from the 4 hours a day Gen Z’s spend here, but enough to disrupt their PC/laptop usage greatly.

Given the ubiquity of smartphones, this is to be expected. But it does demonstrate that they’re far from being a traditional audience, having embraced mobile just like their younger counterparts. It’s their time spent reading press that highlights a readiness to disregard offline media in favor of digital.

Today, they spend around 47 minutes reading physical press, falling behind online press, where they spend just over an hour everyday.

It’s younger audiences, however, that are turning to physical press.

But that’s not to say they’re moving on to digital media entirely.

Gen Xers looked to TV as the go-to device for almost everything entertainment in their youth, which is why they’re now spending over 2 hours a day watching linear TV, 23 minutes more than millennials and 45 minutes more than Gen Zs.

Moreover, 36% of Gen Xers discover brands via ads seen on TV –  more so than younger generations and second only to baby-boomers (43%) – making this an important touchpoint for media planning.

Online TV, however, is yet to take off with this audience, who spend 1 hour 12 minutes a day here, compared to around an hour and a half for Gen Zs. But, given the rate at which Gen Xers are edging toward this form of media, this is likely to change in the future.

For example, though time spent watching linear TV remained stable since 2015, online TV has risen by 30% in the same timeframe.

Generally, smartphones have opened the door to watching online TV – over 1 in 3 internet users watch subscription services via mobile. But Gen Xers are yet to catch up here, with 1 in 4 watching online TV in this manner, still preferring traditional TV sets to watch online TV (34%).

Watching TV on smartphones has surpassed the use of PC/Laptops for Gen Xers. Given the manner in which mobiles have overtaken PCs across the 36 online activities we track for Gen Xers, the gap is expected to widen in the future.

Gen Xers are a generation with intrigue toward the new, exemplified by their increasing use of social media, smartphones and online press, and with this level of digital flexibility comes the opportunity for brands to reach them in far more places.

Generally speaking, it’s common to associate new technology with younger audiences. Over two-thirds of Gen Zs agree they are constantly connected online (69%), compared to only 44% of baby boomers who say the same.

However, this is a classic example where Gen X is misappropriated with these neighbouring generations. Following closely behind Gen Zs, 6 in 10 Gen Xers say they’re constantly connected online (62%).

We’ve already seen how quick they’ve adopted social media and online shopping into their purchase habits, but they’re the generation who’s first to look to the internet when they need information in general (80% say this).

Gen X are, in fact, engaged with new technology more than you might think, with over 4 in 10 (45%) sharing a general interest in technology and half agreeing that its very important for them to have the latest technological products – a figure that only rises slightly for Gen Z’s (54%).

In a world where tech angst is rising, Gen Xers are yet to experience the same problem as younger audiences, being relatively unfazed by technology’s rapid advancement; while 39% of Gen Zs claim technology makes life more complicated, 36% of Gen Xers share the sentiment.

For this generation, technology is a vast improvement in day-to-day life and they’re keen to invest in tech that can improve it further.

Though these devices are relatively niche, Gen Xers prove that older audiences are willing to adopt new technology if it can provide value in their daily life.

This is where smart utility and security devices factor in. Owned by over 3 in 10 Gen Xers with smart home products, these devices can assist them with controlling thermostats, lights and other household fittings.

However, there are some examples where this audience, tech-oriented as they might be, are actually still fully cemented in their ways.

4. A multi-device approach is important in reaching them.

As the generation who championed mobile phones and PCs in their earliest iteration, they’ve no trouble using either of the two devices to accomplish an array of online tasks.

Smartphones are the go-to device globally for all internet users, and Gen Xers are no different, using the devices more than PCs to perform all of the online activities we track.

But compared to younger internet users, despite adapting to using the smartphone for more activities than PCs/laptops, they still spend more time online using PCs everyday than mobiles (around half an hour longer).

Gen Xers have yet to reach the mobile tipping point and strategies should be in place for both smartphones and PC/laptops.

Having witnessed the first home computers in the 1970’s/80’s, Gen Xers are more comfortable using computers for certain activities, the majority of which are commerce related.

For example, just under half of this group search for new products on PCs/laptops, with a further 41% saying they purchased a product online here. This is 13% more likely than other internet users, and their second most-distinctive online activity on this device.

If we split across the world regions, the picture is significantly different. Generally, mobiles have the lead in APAC, LatAm and MEA regions, where consumers are typically more mobile-centric – over half of Gen Xers in APAC purchased a product online via smartphone against just over 1 in 3 in Europe.

Are they really forgotten?

Gen Xers, despite having wasted no time in adapting to modern technology, ecommerce and social media are disregarded in favor of millennial and Gen Z audiences, who have been key in impacting digitally-forward consumer trends.

As with any generation, the deal-breaker is to understand the needs of Gen X without generalization, preparing for online and offline engagement equally.

With a social mindset and varied range of methods to discover, advocate and purchase products, Gen X’s interaction may prove just as rewarding as the other audiences we spotlight. 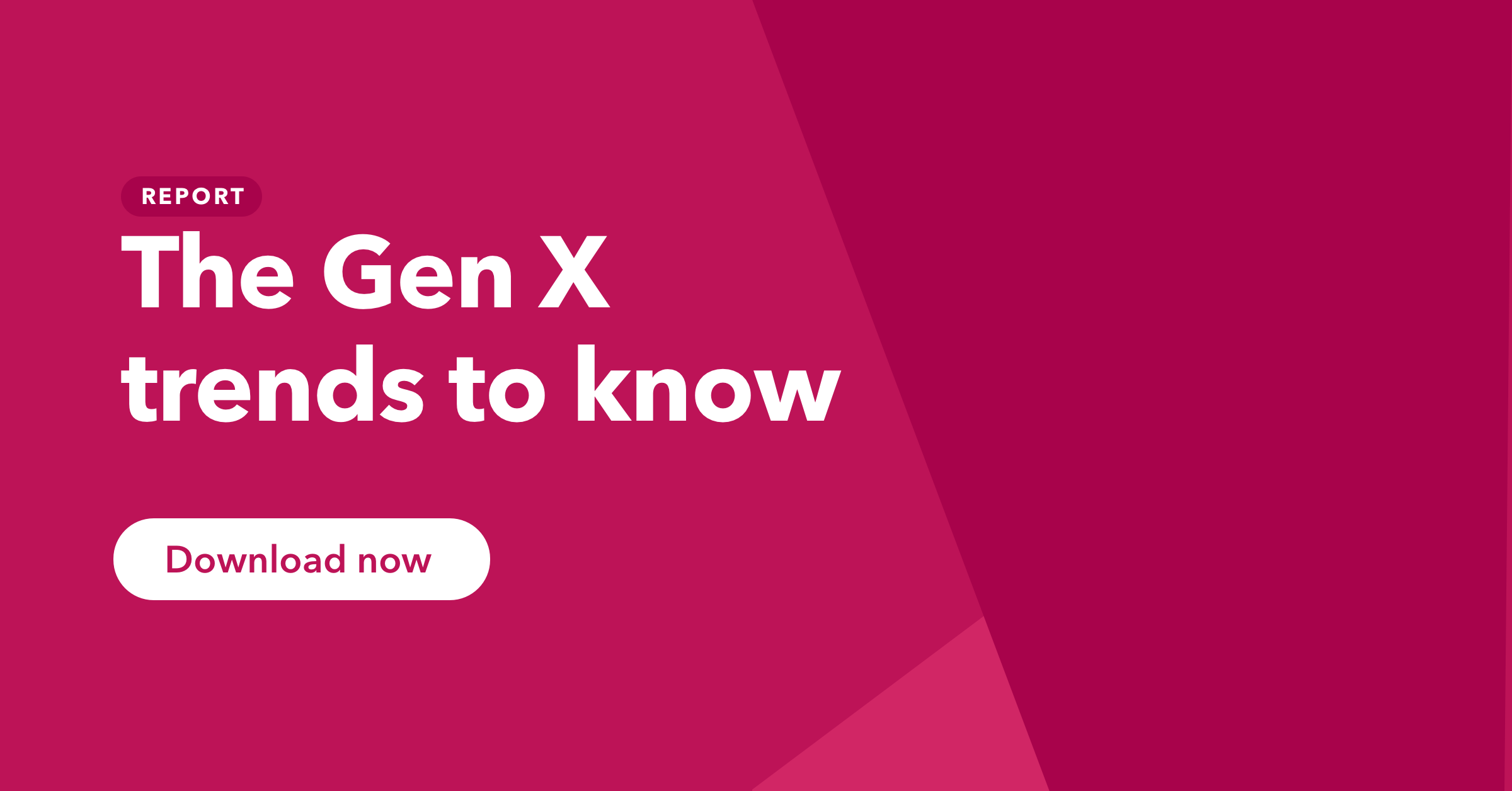