After the invention of barcodes in the mid 70s, there was an almost instant demand to encode more than the 20 characters held in traditional barcodes.

Based on user feedback, Denso Wave (owned by Toyota Group) put together a team of two to develop a 2D barcode that would be quicker and more flexible to scan.

Eventually, in 1994, they came up with a barcode that could hold up to 7,000 characters and could be scanned in any orientation up to 10 times faster than any other code at the time.

The QR code (Quick Response code) was born, and, being one of the first technologies that could easily connect the real and digital worlds, it was expected to be a major success for customers and marketers alike.

However, reality soon put a dampener on these high hopes.

The fall and resurrection of QR codes.

Requiring an additional application, accidentally opening to inactive websites, and codes not being scannable in poor lighting didn’t do much to boost the QR code’s standing. It was often easier to type in a URL than line up a smartphone camera to read the codes.

Today, inventions such as near-field communication (NFC) tags, most widely known as the secure and easy-to-configure technology behind contactless mobile payments, have moved into the areas QR codes historically attempted to fill. 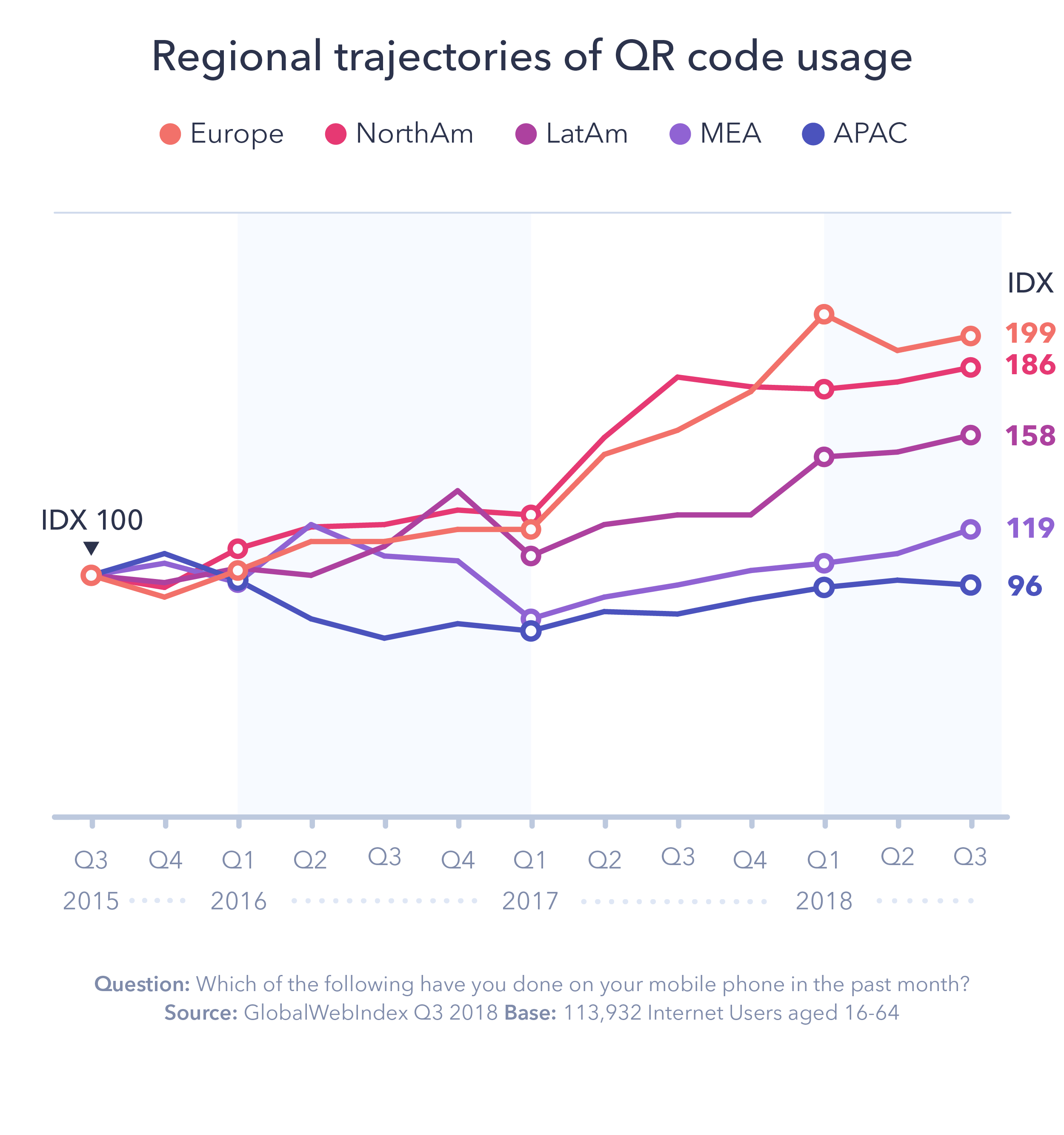 In 2015, long after most had written off QR codes, Snapchat gave them a boost by launching QR-based Snapcodes, allowing users to easily follow their friends. Shortly after, Amazon, Google and Instagram all seemed to contract QR fever.

Last year, Apple’s iOS 11 incorporated a native QR code reader built into the camera app, and an expansion of the onboard NFC chip support allowed it to read NFC tags in the real world, as opposed to being limited to Apple Pay use.

Technologies often survive being pronounced dead. It can take a while to find its niche, but when it does, it’s suddenly useful and ubiquitous.

Over the past three years, we’ve seen significant increases in the number of consumers that scanned a QR code in the past month.

Twice as many respondents in Europe and North America scanned a QR code in the past month compared to Q3 of 2015.

The use of these codes is also gradually increasing in the Middle East and Africa, from a low of 12% in Q1 2017 to 18% in Q3 2018. While Europe may lead the way with contactless payments, the story in Africa is very different.

Payment solutions need to be different in Africa; the financial infrastructure is less developed and many of the financial ‘essentials’ present in Western markets are not available here. 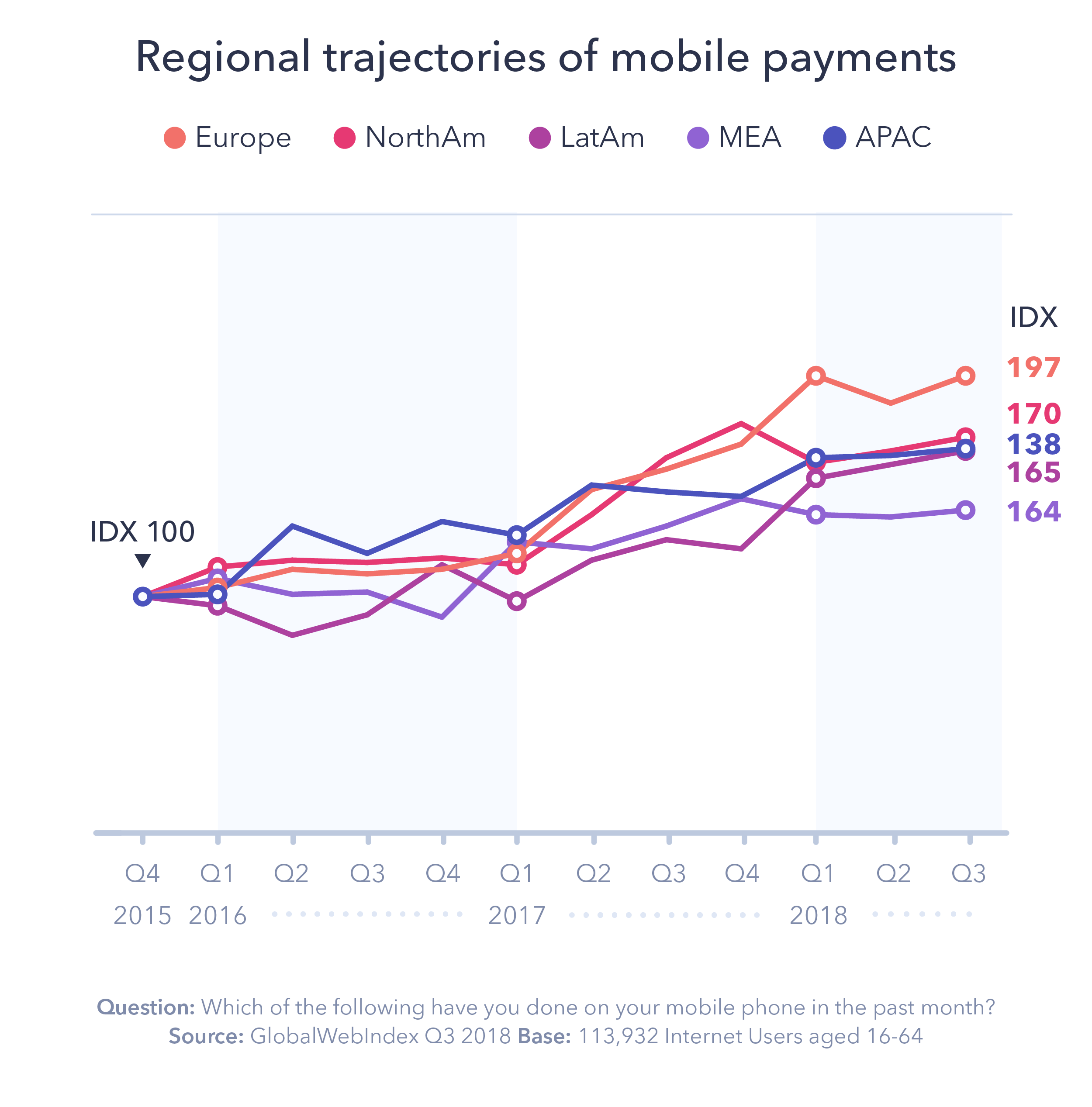 Using Mastercard’s Masterpass QR – which will be making its social debut in Africa as part of a partnership with Facebook – customers can buy a solar energy system on credit and use their phone to make small daily payments for less than what they previously spent on hazardous kerosene lamps.

The future of QR codes and the role of NFC.

NFC has a steep hill to climb. Apple has decided to enable only reading of tags, and only on an app-by-app basis, meaning app developers will have to build support into their own software to make it work.

However, NFC could play an integral role in the ever-evolving state of brick-and-mortar retail stores.

It’s no secret that many old-time favorites, such as Toys R Us and Claire’s, are struggling to survive in the digital transformation of retail.

NFC has the potential to add an engaging, novelty element to the shopping experience. By directly tapping a product with an NFC tag embedded into the label or packaging, users can be greeted with anything from branded videos and exclusive coupons, to social media reviews of the product, or more information about the brand’s story.

Respondents who have used a brand’s QR code indicate a preference for innovation and novelty over usefulness. They’re 40% more likely than the average consumer to want the opportunity to contribute ideas for new products and designs, and over 2.5x more likely to have interacted with brands in such a way. 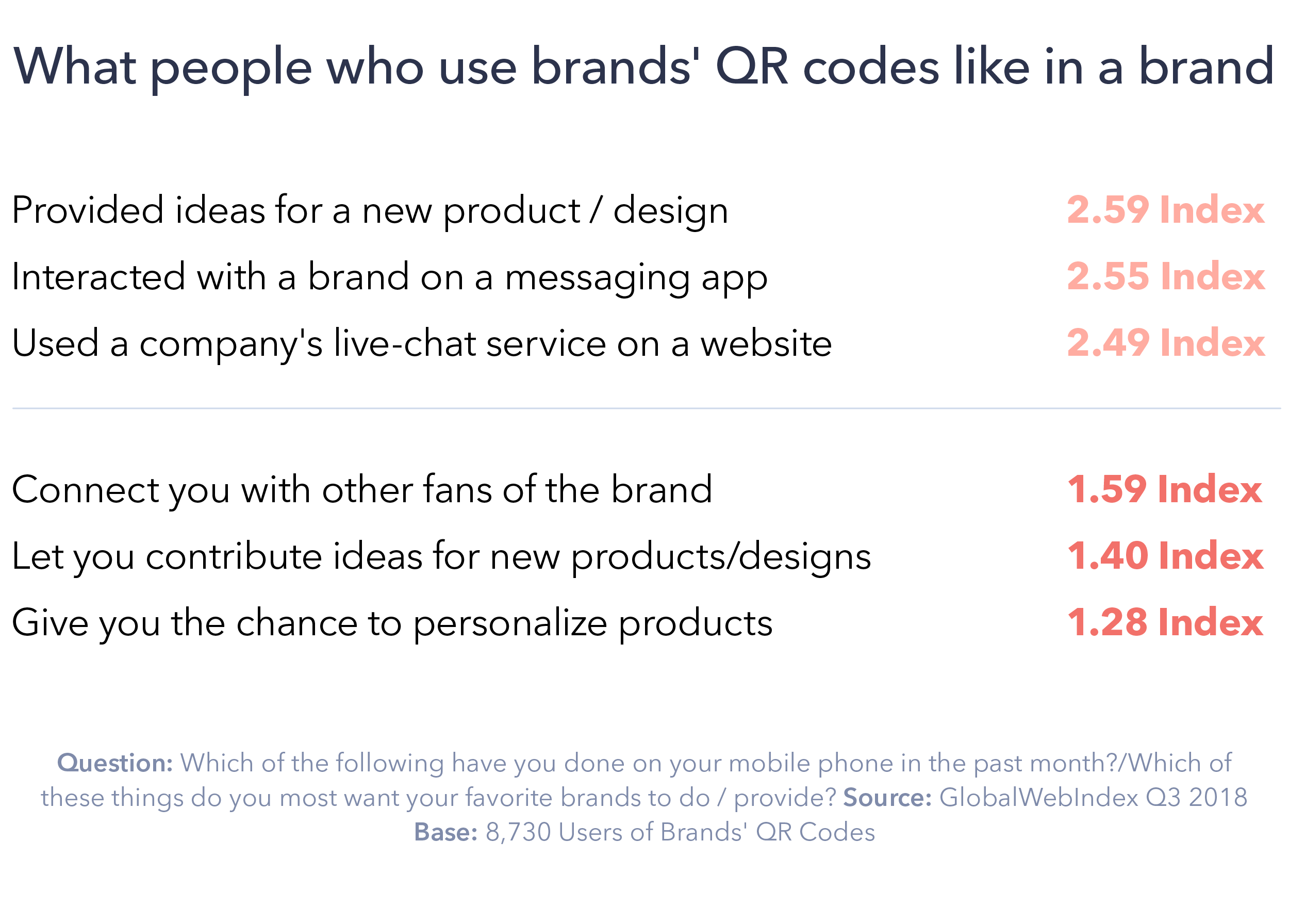 How should brands position themselves?

The respondents who have used a brand’s QR code in the past month have distinct preferences in other purchase areas, too. 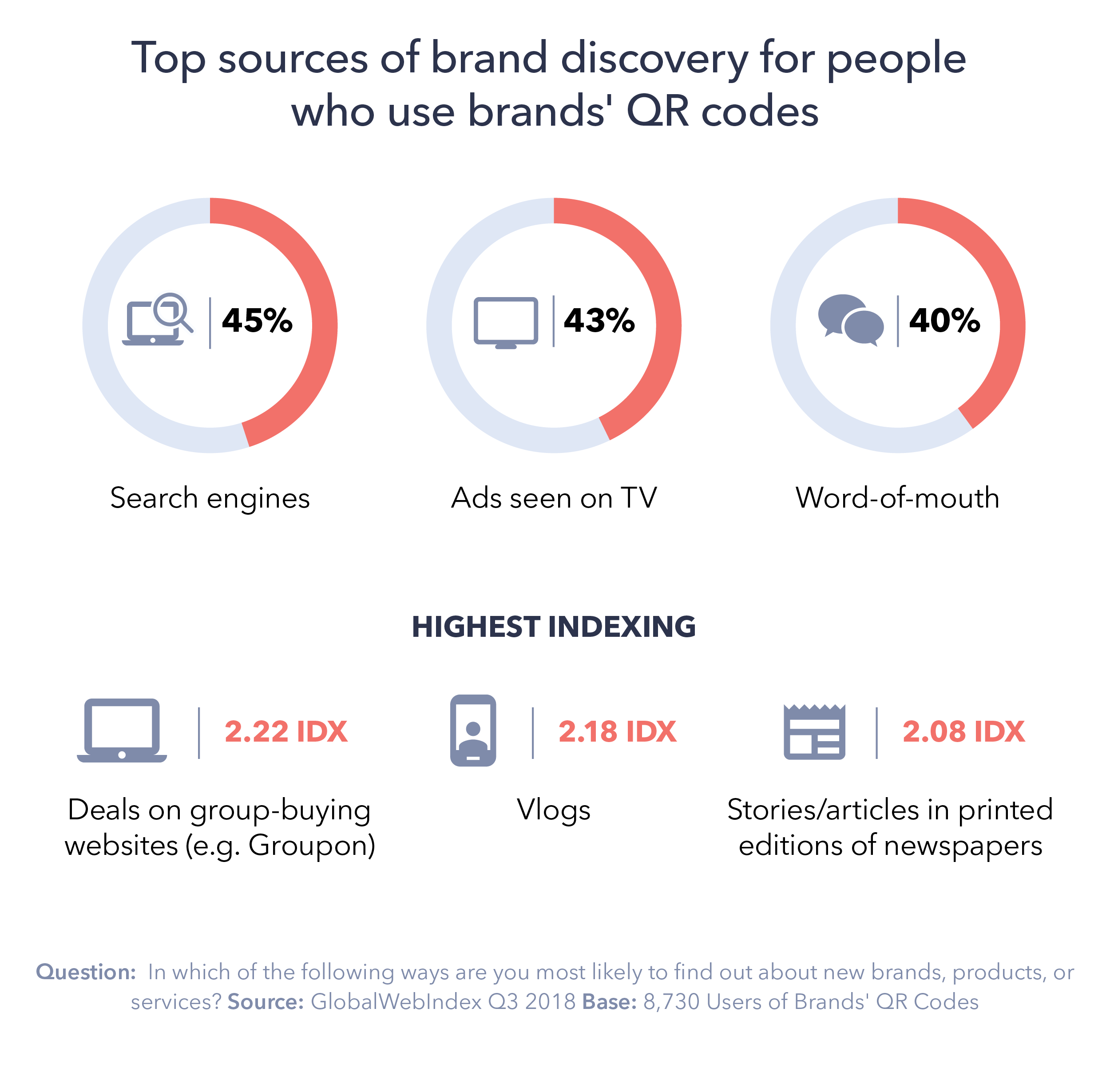 They’re over twice as likely as the average internet user to discover brands via deals on group-buying websites like Groupon, and 2.5x as likely to say the presence of ‘buy’ buttons on social networks would make them more likely to complete a purchase. 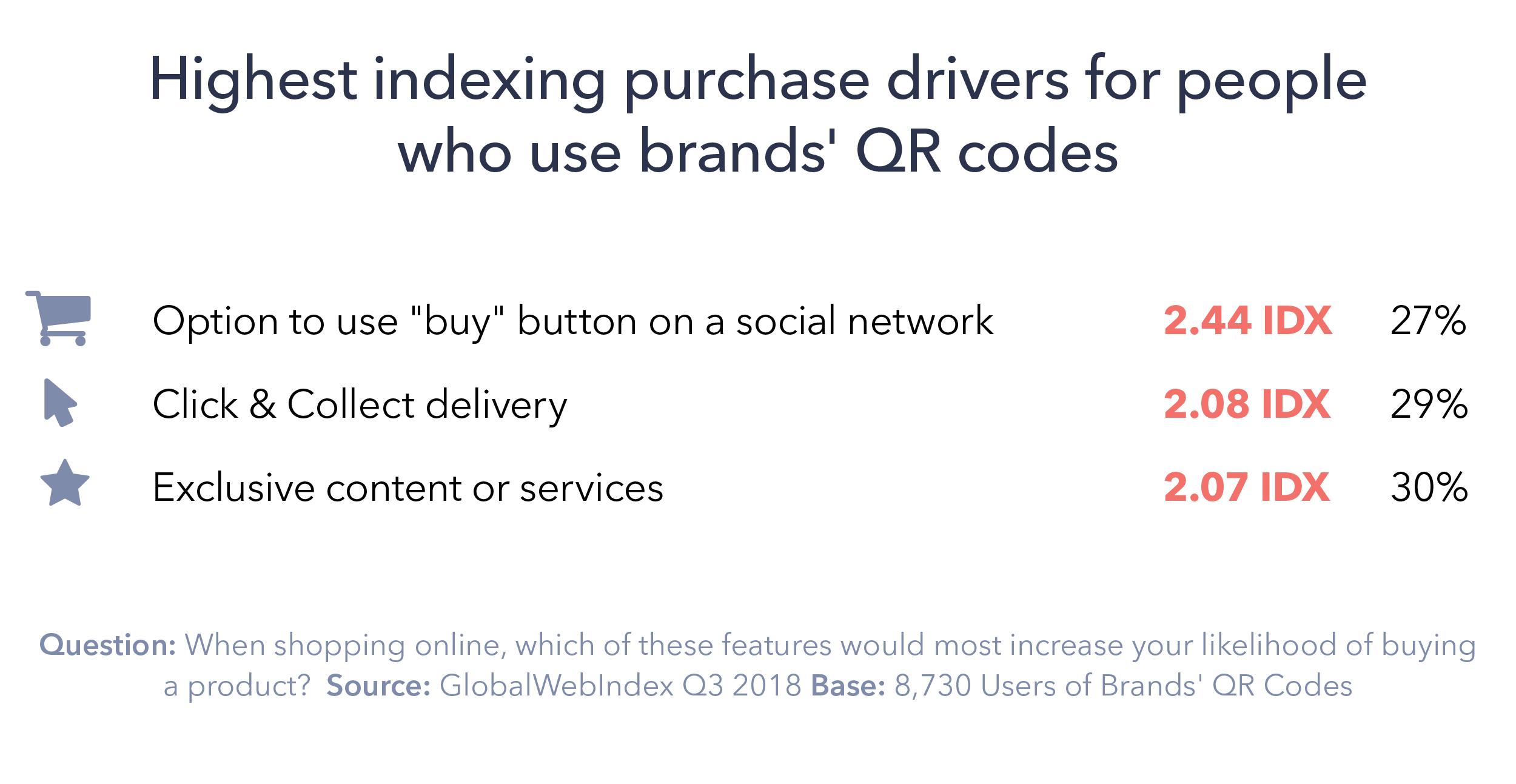 Used in the right way, QR codes and NFC are exciting consumer engagement tools for the future.

In Japan, for example, banks and regional financial institutions expect to come out with a unified smartphone payment service, perhaps in April 2020.

This will allow savings account holders to pay merchants by showing QR Codes that appear on their smartphones.

WhatsApp is also testing a new feature that should make it easier to add people to your contact list using QR codes.

Soon, NFC will have to compete with augmented reality, meaning cameras will have better integrated AI that allows for greater recognition of images, scenes, products and people.

With cameras being less reliant on machine readability, and novelty being a weak foundation for tech adoption, it remains to be seen whether these technologies can bring the offline world into retail situations and become a mainstay for brands and consumers alike.