Despite being 40 years old, the Star Wars franchise shows no signs of dwindling in popularity. With Solo: A Star Wars Story set to land in cinemas later this month, the accompanying marketing frenzy is well underway.

This is an opportunity for marketers to make use of the excitement, but what do we really know about Star Wars fans and their behaviors?

To answer this, here are five things you probably didn’t know about Star Wars fans.

1. Over a third are female

It’s easy to make the mistake of assuming the stereotypical Star Wars fan is a young white male. Over a third of Star Wars fans are women, which opens up opportunities for brands looking to leverage the franchise’s success by enticing these fans.

CoverGirl is one brand that knew how to do this, and do it well. Ahead of the release of The Force Awakens in 2015, the cosmetics brand unveiled its Star Wars makeup collection, claiming that it wanted its “target audience to try out one of our more unique product lines so that they can see the benefits of becoming loyal to CoverGirl instead of being loyal to another brand of makeup.”

Similarly, Cargo Cosmetics has developed a line of make up for The Last Jedi, this time in a slightly higher price range than the CoverGirl offering.

81% of Star Wars fans have purchased a product online in the last month.

According to Box Office Mojo, the Star Wars films, including re-releases and adjusted for inflation, have made over $6.5 billion.

Despite this, it’s merchandise that generates the most revenue for the brand. The total revenue generated by licensed merchandise rose to $251.7 billion in 2016 following the release of The Force Awakens and the new marketing effort Force Friday.

Star Wars fans are 45% more likely than average internet users to be encouraged to purchase a product via ‘buy’ buttons on social media. With online shopping now being a mobile-first activity, it shouldn’t be long before fans can purchase licensed Star Wars merchandise through their social media platforms.

3. They want to be part of a community

Star Wars fans are 68% more likely to buy a product simply for the experience of being part of the community built around it.

Despite fans’ willingness to buy products on the basis of loving the brand, the tale of Battlefront II proves that brand strength only goes so far – you have to have a great product as well.

Video games are an integral part of the Star Wars brand, with Battlefront I selling 14 million copies in 2016 alone.

Its follow-up Battlefront II, on the other hand, has proven controversial. Released on November 17th, 2017 with a price tag of $60, its micro-transaction structure has been widely slated by fans who have accused it of being ‘gambling.’

The criticism has reportedly caused a $3.1 billion decrease in stockholder value for EA Games (the developers of Battlefront I and II) so far.

This is a crucial setback for the gaming franchise, as 91% of Star Wars fans use a device to play games, with 1 in 4 having played a Star Wars game in the last 12 months.

Star Wars fans are all about exclusivity and feeling like they’re part of a community. 1 in 4 say exclusive content would increase their likelihood of buying a product.

They’re willing to pay more to get the most enjoyment out of the brand, being 89% more likely than the average internet user to say that they tend to buy the premium version of a product.

EA Games appears to be aware of this aspect of its target consumer, offering up a $79.99 ‘Elite Trooper Deluxe Edition’ of Battlefront 2 which, for a higher price, gives the player better features at the very start of their gameplay.

5. They want their opinions to be heard

39% of Star Wars fans say sharing their opinion is a main reason for using social media.

This shows that they are vocal critics that care about making their thoughts heard. Over a quarter of Star Wars fans have posted online about films in the past month, proving this even further.

But this interest doesn’t stop there. 39% of 25-34 year-old Star Wars fans visit the cinema at least fortnightly, showing that they’re heavy cinema-goers that are passionate about film and like to share their opinions on their experience.

In fact, 20% of Star Wars fans claim that they discover brands via cinema ads, climbing to 22% for female fans. This proves that cinema is a highly effective marketing channel, especially when it comes to brand discovery. 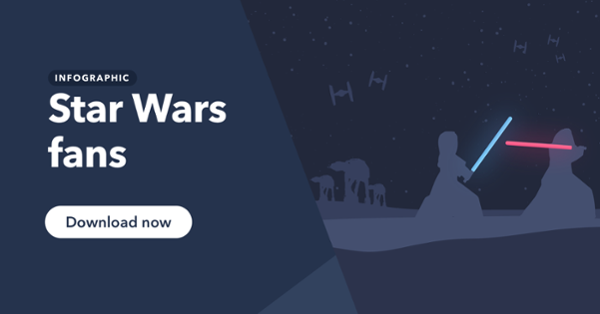