Affluent consumers are a lucrative audience for brands and marketers across a range of industries.

These wealthy consumers are very brand-aware and are willing to pay more for premium products, so it’s little wonder why brands are keen to understand this audience more deeply.

Our latest report on affluent consumers takes a deep-dive into their behaviors, attitudes, media consumption, and purchase journey to arm brands with everything they need to know to effectively reach this group.

Here are the highlights.

Affluent consumers care deeply about their career. Even though the majority of this group are parents, they’re highly work-oriented.

Over 90% are in full-time work, part-time work, or are self-employed, compared to just over 70% of internet users globally. Their relentless ambition really underpins this audience.

They’re 1.2 times as likely as the average consumer to say they’re career oriented and that money is the best measure of success.

Additionally, this audience also values status and cares about how they’re perceived by others. Around 2 in 3 say they like to keep up with the latest fashions and over half like to stand out in a crowd.

It’s also clear they value premium brands that will enable them to stand out among their peers, with 70% saying they tend to buy a premium version of a product. When looking at their purchase journey, we see this group is 1.3 times as likely as the average to be motivated by exclusive content or services (23% do).

The key to really gaining their loyalty lies in enhancing their status and emphasizing exclusivity.

Brands need to remember: this brand-conscious audience doesn’t shy away from paying more for what they want – which is music to any brand’s ears.

2. Smart tech is key, but there are also signs of tech frustration.

This is likely down to the popularity of smart home assistants in this region.

Over 2 in 5 say technology makes life more complicated and around 1 in 3 say they don’t understand computers or new technology.

Considering that we live in an always-on society, while simultaneously dealing with widespread data privacy breaches, it’s little wonder that affluent consumers are feeling worried and overwhelmed.

As a result, this group is taking action to protect themselves online, by using a private browsing window or an ad-blocker, for example. The wealthiest consumers are also more likely to be switching off from certain media.

A bespoke study we carried out in the U.S. revealed those in the highest income bracket are much more likely to remove social media apps or email from their phones, and reduce the amount of TV they watch.

It’s important for marketers to bear in mind that this group is very open to interacting with brands. Marketers should focus on building upon their natural keenness for interaction in a way that’s not intrusive and is relevant to them.

As users’ expectations continue to evolve, any brand will do well to keep transparency and user control front-of-mind in everything they do – it’s key to building brand trust.

3. They’re keen users of traditional and digital forms of entertainment.

They’re avid users of both online and linear TV, spending roughly 3 hours and 40 minutes across both per day.

While they’re still spending longer watching linear TV than online TV (roughly 15 minutes more), the gap between the two is smaller than it is for the global internet user. From a regional perspective, linear TV outperforms online TV in all regions except APAC.

This group is also particularly keen on music streaming, spending close to 2 hours listening per day.

They’re spending most of their day, however, on social media at 2 hours and 36 minutes per day – just over 10 minutes longer than the global average. Affluent consumers also have an average number of 11.7 accounts compared to the global average of 8.6.

We see some differences with age. Consistent with global patterns, younger affluent consumers spend longer on social media than their older counterparts.

Their love of visual content is something that brands can tap into, by showcasing lifestyles and promoting inspiration. This could be especially powerful considering this group values status.

While search engines remain the most popular method to discover brands and to research products overall, social media plays a key role in the purchase journey for younger internet users in emerging markets.

Just over 40% of 16-34 year-olds turn to social media for product research.

What’s more, this percentage rises to over half for this group in Latin America and just under half in the Middle East and Africa.

This audience is also particularly receptive to influencers, especially in emerging regions. For example, around 1 in 5 affluent consumers in APAC and the Middle East and Africa find out about brands through endorsements by celebrities or well-known individuals compared to just 7% in North America.

For example, affluent consumers in APAC, Latin America, and the Middle East & Africa are 1.5 times as likely as the average to click on a brand’s sponsored post on social media.

Affluent consumers in these regions over-index significantly for engaging with brands on social media, whether that’s sharing a brand’s post, uploading a photo/video to a brand’s social media page, or asking a question to a brand on a social network.

Above all, affluent consumers are not simply buying products, they want to be actively involved with brands and social networks are the perfect avenue to foster these relationships.

5. Brand involvement and personal relationships are key to driving loyalty.

Their relationship with brands goes beyond simply making a purchase – they’re not passive bystanders, but want to actively participate.

Over 20% of this audience say that the ability to speak to a company via a live-chat box is an important purchase driver.

Close to 3 in 10 will promote a brand online if they’re directly involved or have a personal, one-to-one relationship with a brand.

2 in 5 will do so simply out of love for the brand. Affluent consumers are also 1.5 times as likely as the average to provide ideas for a new product/design and 1.4 times as likely to interact with a brand on a messaging app.

Given this, it’s absolutely vital that brands listen to these consumers – 45% want brands to listen to customer feedback and 40% want to feel valued.

Successful brands should focus on involving this group in the process as much as possible, for example engaging them in product design or as influencers. They’re a vocal group, who know what they want, and brands stand to reap serious rewards if able to engage this lucrative audience. 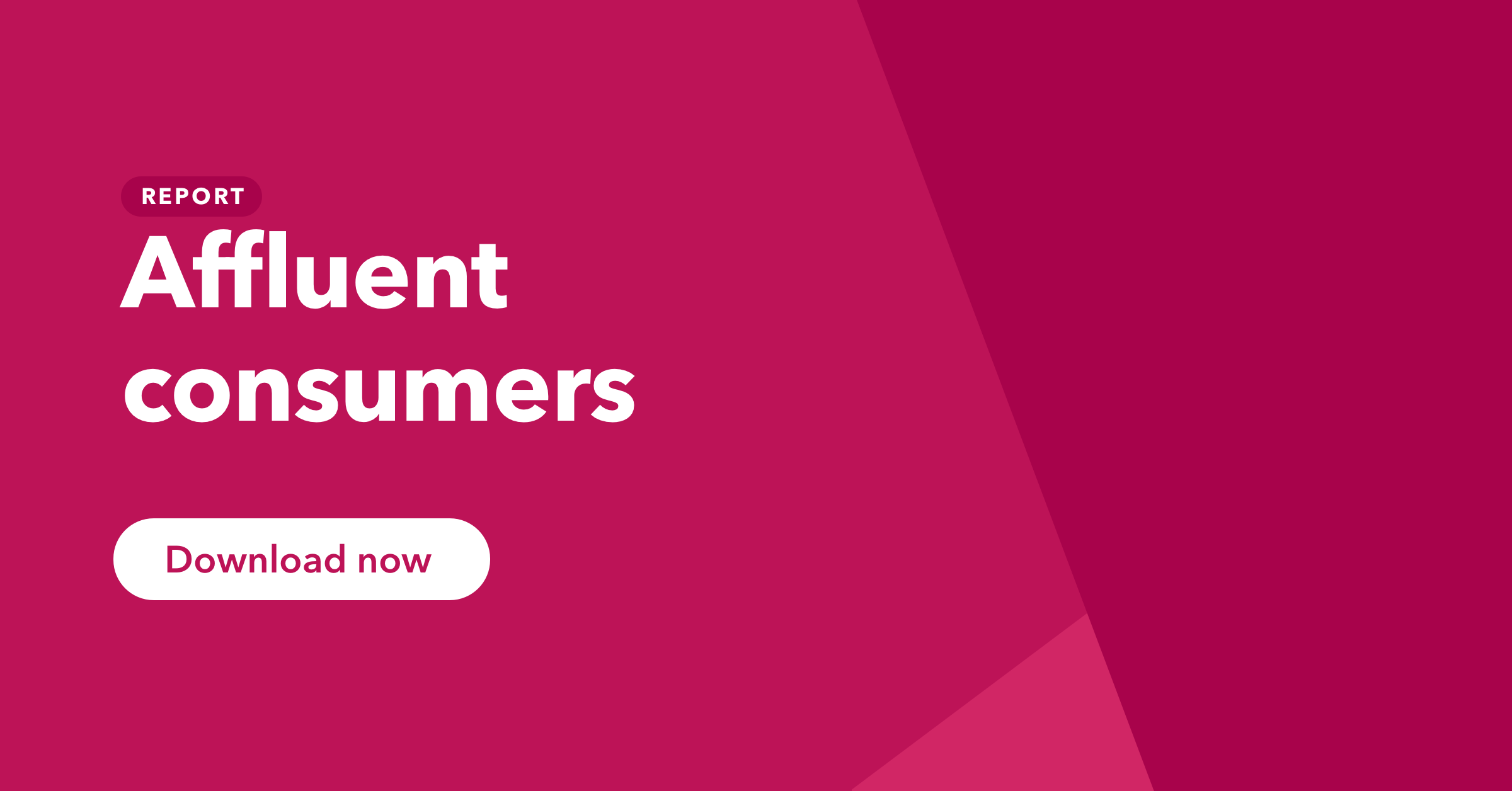