The Smartphone is the Real Future of VR

As GWI’s new Virtual Reality Trend Report (clients can download a copy here) explores, we’ve seen some major developments in the VR industry recently. PlayStation’s VR experience could hit the ground running in the gaming market, where product innovation is at the forefront of future growth strategies. Meanwhile, the next stage of Google’s VR initiative – Daydream – promises to bring high-quality smartphone-enabled VR to the masses. But confronted with the obstacles of pushing VR into the mainstream, it’s Google’s mobile-centric approach which holds the most intrigue here.

With games consoles, high-end PCs and smartphones being the primary entry points into the market, the cost issues surrounding upper-tier headsets are clear. Nevertheless, support via three device types also raises interesting questions about how the future landscape of VR might look. 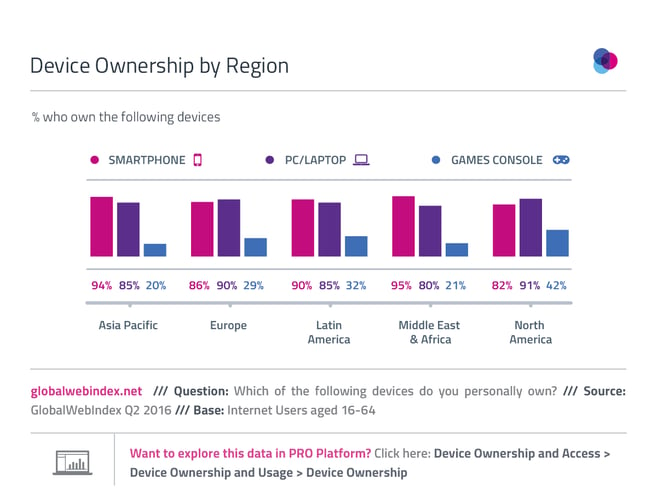 That PCs/laptops have impressive ownership figures across all regions is good news for the Oculus Rift and HTC’s Vive, but there remains the issue of whether enough of these PC/laptop owners actually have a device with the sufficient specs to power these headsets.

Elsewhere, with figures for console ownership lagging in APAC (partly due to the ban on consoles in China only having been lifted in 2014) and the Middle East & Africa, this largely leaves Europe, LatAm and North America as the most fertile markets for the PS VR. Yet it’s in some of these markets where we typically see lower figures for interest in VR and, even in these countries, it’s only around a third of console owners who actually use a PS4.

That leaves smartphones. The fast-growth regions which have the highest level of interest in VR are also the regions with the highest rates of smartphone adoption. In fact, mobile usage powers many of the online activities in these regions, with the majority (40-50%) of online adults in APAC, LatAm and the Middle East and Africa citing smartphones as their most important device for getting online. What’s more, with rates of smartphone ownership pushing above the 90% mark in these regions, these devices could present the key growth areas for VR, allowing it to bypass cost restrictions and maximize exposure. 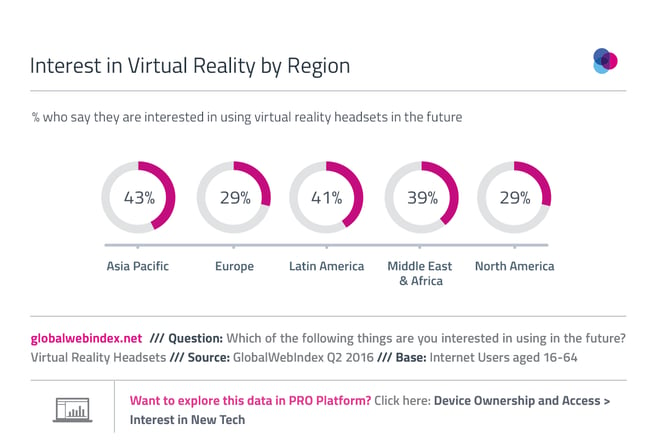 Admittedly, these cheaper alternatives could leave some consumers feeling underwhelmed with the VR experience, but education is paramount here – consumers need to understand the difference between high-end VR and the likes of Google Cardboard.

For VR to make it to the mainstream, developers need to look at it from the perspective of the consumer, and that ultimately means targeting consumers on the devices that they are already using, which is where the smartphone stands as the strongest contender.

Processing powers, screen resolutions and in-built camera technologies are all improving rapidly in the smartphone industry. Samsung’s latest flagship series smartphones, its Gear 360 camera and LG’s latest offerings all boast 360-degree video capturing capabilities, essentially opening the door to user-generated content in the VR space. What’s more, Google’s recent Pixel smartphones have been designed with VR as a chief concern. As such, VR could be a vital component in the development of mobile video, and so it’s no wonder that Facebook has partnered with Samsung to refine VR streaming technology via the Gear 360 headset. More than 7 in 10 16-34s are watching videos on mobiles each month, with well over half uploading their own videos online. And with social platforms shifting towards mobile, as well as concentrating on their online video offerings, integrating VR here could be a prime method for social networks to stand out from the crowd.

Mobile will surely be the first point-of-call for the majority of first-time VR users, and as a result this needs to be the medium where developers invest the most time and effort. After all, the requisites for VR to push into the mainstream – primarily affordability and the need for worthy content which meets consumer expectations – see some of the most promise in the smartphone.