Stories of a “context collapse” on social media have been appearing in the headlines lately, with reports that networkers are becoming less and less willing to share personal updates. But is there any real evidence for a shift towards passive networking? And importantly, is it a problem that is affecting all social platforms?

Certainly, take a look at the different motivations for using social media and there is some strong evidence for this move to passive networking. GlobalWebIndex’s data shows that internet users are more likely to regard social networks as a way of filling up spare time (39%) or catching up with news and current events (37%) than a place to share their opinion (30%) or details of their personal life (20%). Social networking might now be completely ingrained, but it’s clear that not everyone is looking to contribute content.

Moreover, those who are seeking to share content now have a much greater choice over where to do so. With the average internet user having an account on 6.87 different services, they have a wide range of specialized platforms available for their sharing – they can share their photos on Instagram and Snapchat, direct message friends on WhatsApp and get involved with real-time discussions on Twitter.

Take a look at the ratio of engagers to members and the effect of a more-congested social space on the older, established platforms is particularly evident. Back in 2013, over two-thirds of Facebook’s members were contributing or engaging with the platform each month, giving it a decent lead over other platforms. Fast-forward to 2016, though, and this ratio has dropped 10 points, despite membership holding steady. To a lesser extent, the same is true for Twitter, which has also seen the proportion contributing dip slightly over time. Still, it’s not all bad news for these networks: visitation has remained stable over the same period (even ticking upwards in the case of Twitter), and importantly, people only need to visit in order to be served ads. Plus Twitter is sure to draw a lot of content from the range of celebrities or influencers on the platform.

It’s a different story for the smaller, fast-growing platforms like Instagram, Pinterest and Tumblr, which are seeing increases in members, visitors and engagers. And for these networks, the ratio of engagers to members on these platforms is actually on the up; not only are they adding more members and visitors, these new users are actually becoming more active when visiting. Whereas on the big platforms users may have built up more than a decade’s worth of acquaintances added as friends (including some with whom they may not feel comfortable sharing their personal posts), these smaller platforms provide users with greater control over who will be seeing their personal updates. This is clearly giving these platforms an edge, with photo sharing greater on the likes of WhatsApp, Snapchat and Instagram than it is on Facebook and Twitter.

Evidently, then, it’s the established platforms that are suffering the most from this “context collapse”. Although this represents a concern for the big networks who have built big targeted ad platforms off the back of personal data, that’s not to say that users are refraining from interacting altogether. Some user-generated content may migrate to messaging apps and smaller services, but larger platforms will continue to attract impressive visitor numbers, and sharing will remain strong – it just may take a slightly different form, including cross-posted content from other sites, news stories or articles and videos. Undoubtedly, though, social behaviors are evolving. 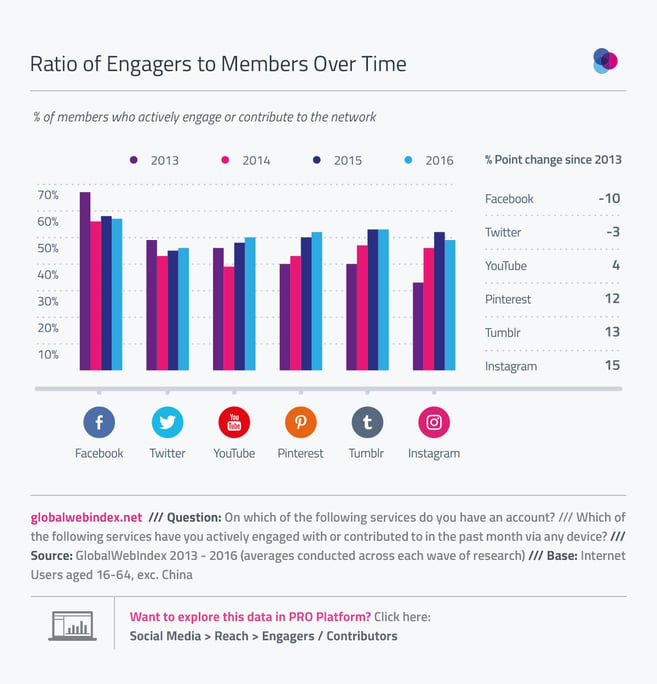