The Social Election… That Wasn’t

Much has been written about the results of the recent General Election in the UK – with both the exit poll and final outcome defying most of the pre-vote predictions about who would end up forming the next Government.

To understand what drove voters in the final days and hours before they cast their votes, GlobalWebIndex has re-contacted close to 2,000 UK voters. We first spoke to them back in late March and early April, asking them which party they were most likely to support. In the days following the election, we then surveyed them again, asking who they eventually ended up supporting, how their views changed during the Election campaign and how vocal they were in terms of sharing their views. That allowed us to track who stayed with their original party as well as who switched allegiance.

In part II of this post, we’ll look at some of the factors that made the results so difficult to predict using conventional questions – including that 40% of people considered switching parties and that Conservatives really were the most reticent when it came sharing their voting intentions. But for now, it’s the social side of the election that I want to consider.

Like no election before it, the 2015 contest was positioned as The Social Election (with various commentators or networks keen to call it The Conversational Election, The Facebook Election, The Twitter Election….). But our research makes it strikingly clear that this is one area where we need to be extremely cautious; the noise being made inside the online space simply did not correspond directly or representatively with the demographics or party affiliations of those entering the voting booths. It’s not so much that people were saying one thing online and then doing another thing on voting day; rather, it’s that the conversations taking place online were extremely one-sided.

Let’s look at some numbers.

These days, it’s perfectly legitimate to talk about “The Digital Olympics” or the “The Social World Cup”. But we need to be cautious about extending these adjectives to every major event that comes along – otherwise we’re going to find a very different set of results to those we were expecting. 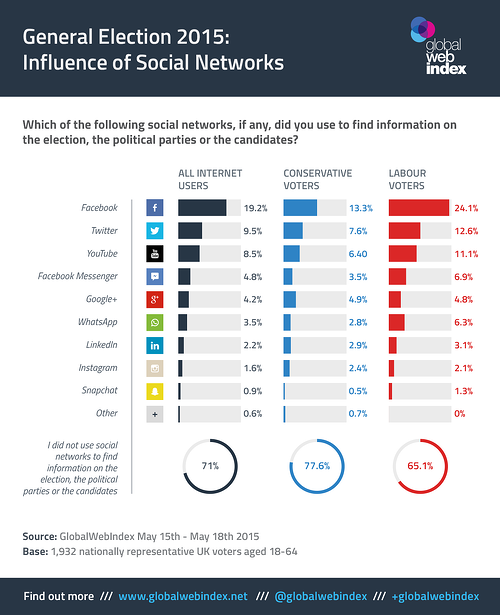 GlobalWebIndex conducted online research among 1,932 nationally representative voters aged 18-64 between 15th – 18th May. All respondents had previously participated in a questionnaire fielded in late March / early April 2015 where they had been asked to state who they were most likely to vote for at the General Election; this allowed us to compare pre-election intentions against actual votes.