In the world of digital, few things are as certain as Facebook’s quarterly announcement that it has added yet more members and active users.

But with the social networking landscape growing more competitive than ever – and with chat apps in particular capturing a lot of the conversations that used to take place on social networks proper – just who are these additional users? After all, speak to Facebookers in countries like the UK and US and many will express a degree of boredom about the site. While very few of them have actually upped and left the site (or have plans to do so in the near future), most will say they’re using it less than they used to. So, why isn’t this coming through in Facebook’s own self-published figures? How can it keep posting such strikingly consistent growth?

The key metric to watch here is like-for-like usage across the same countries. Over the last few years, Faceboook membership in GWI’s 33 countries has held absolutely steady at 82%. Clearly, then, people aren’t leaving the site. What’s more, visitation has seen only a very small downwards tick, dropping from 77% to 73%. So, people are still visiting Facebook, too – something which shows why the service will continue to post such healthy ad-derived profits. Crucially, though, active usage has dropped considerably – down by more than 20 percentage points since 2012. 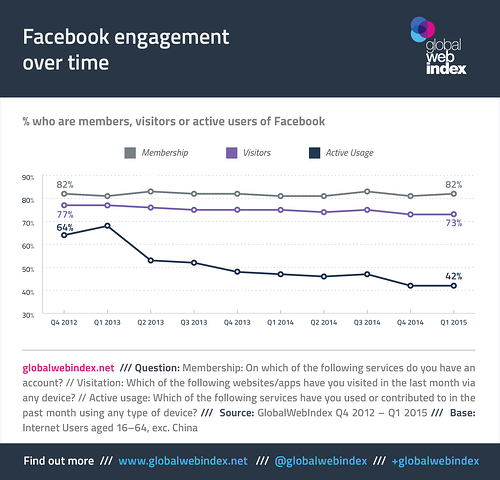 Definitions are crucial here. For GWI, an active user is someone who says they’ve actively used or contributed to the service during the last month. And it’s strikingly clear that it’s this behavior which is changing: existing members of Facebook might still be visiting the service, but they’re using it less intensively than before and for fewer things. That’s hardly surprising if you examine how many other networks and apps the average Facebooker is now using too, but it’s something that Facebook itself wouldn’t necessarily want to admit.

For a network that’s more than 10 years old, the fact that its existing membership base is holding steady is a rather remarkable achievement. Nevertheless, to keep posting growth and keep the headline writers and investors happy, new internet users in emerging internet markets are pretty key to its future. And that’s why Facebook Lite matters so much. It’s a stripped back version of the service which is less than 1MB in size and yet still offers what the company calls “core experiences like News Feed, status updates, photos, notifications and more”. It’s specifically designed for those with slow mobile connections in regions like LatAm, APAC and Africa and is a very clear sign that it’s in these parts of the world where Facebook sees its best chances of continued growth.

Having long reached saturation point among mainstream internet users, Facebook needs to engage the millions of mobile-first or mobile-only users who are coming online each year. As a result, we can expect to hear a lot more about Facebook Lite in the years to come.