Why LinkedIn Should be Worried about Facebook At Work

In recent quarters, Facebook has been the only major social network to see a drop in active usage in GWI’s data. Despite finding ways to post quarter-on-quarter rises in its own self-published figures, the reality for Facebook is that its future like-for-like growth levels in mature markets will be modest at best. Increasingly, it is having to rely on fast-growth markets – where internet populations continue to expand rapidly each year – to add new members in any meaningful quantities; elsewhere, it has reached saturation point and is now employing an extremely broad definition of active usage. As Facebook ages and the social networking landscape becomes more and more competitive, it knows that it can’t keep growing exponentially and that’s why it’s been looking for new ways to engage existing audiences. It wants fresh ideas, and new audience types, to maintain momentum and to keep investors/headline writers happy.

The key thing here is that people are still visiting the site – GWI’s data might show a strikingly consistent drop in active usage across our 33 markets, but it also reveals that visitor numbers are holding steady at around the (pretty impressive) 75% mark. People aren’t leaving Facebook, then, they’re just doing less on it. That’s why it developed the offering for Tor users. It’s why Facebook has introduced a Timehop-clone feature which reminds people of Facebook events from years gone by – and encourages them to post them anew. (Clearly, recycled posts are better than no posts at all). And, crucially, it’s why Facebook has brought its At Work service to market.

Think about the ways that most people use Facebook and it’s not hard to understand the thinking here. For most people, Facebook is a not-strictly-suitable-for-work site. Sure, lots of us check it anyway, but we know we’re not really supposed to be Facebooking during work hours. And, of course, some offices ban it altogether. But create a version of the site that’s specifically designed for the workplace and – hey presto – you’ve got a new 8-hour window each day when people can openly and legitimately use the service.

That LinkedIn has been growing strongly over the last year (+39% for active users) is also of obvious relevance here. Facebook has a long history of seeing what other sites are doing well and then introducing a comparable offering. And that users of the two sites share a very similar demographic can hardly have escaped Facebook’s attention – of the major social networks, LinkedIn and Facebook have the oldest user bases. 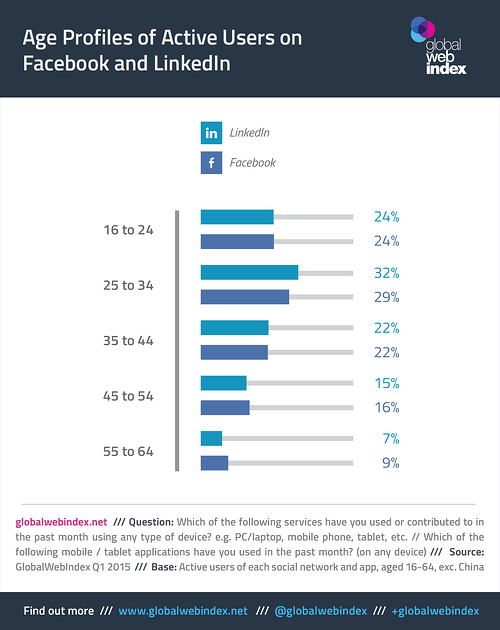 So, if there’s clear overlap between the propositions and the audiences, should LinkedIn be worried? Can’t it just rely on its first-mover advantage and the fact that it’s the established go-to point for professional networking? In short: no. Look at interest levels among digital consumers in the UK and US, and there’s a pretty worrying trend for LinkedIn. Among all online adults, about a quarter express an interest in Facebook At Work. This rises a little among Facebook’s active users (to 29%) and creeps still higher for Facebook visitors (31%). But the figure then rockets among LinkedIn’s active users, to hit 49%. That means 1 in every 2 LinkedIn users is interested in Facebook At Work. And while multi-networking across numerous sites is now the prevailing trend, it’s not hard to see how users might choose just one site for professional networking, rather than using two very similar services. 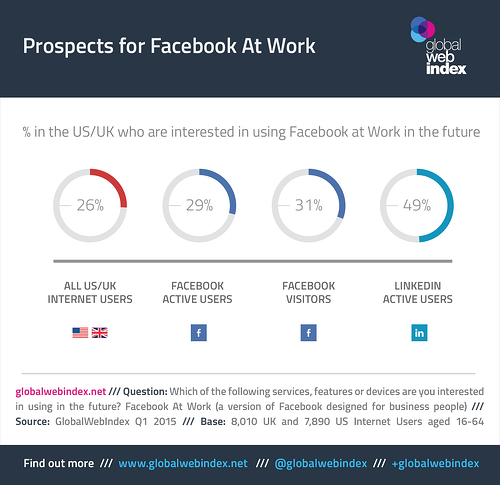 Of course, translating expressed interest into actual usage is a quite a challenge. But Facebook’s reach combined with its determination to stay relevant and buoyant should not be under-estimated. It’s also a sign of things to come: LinkedIn might be the target right now, but you can bet it has other networks on its horizon too.