Why the Apple Watch just isn’t good enough… yet

Once upon a time, Google Glass was the “hottest” wearable out there, the one that was supposed to push this genre into the mainstream and convince digital consumers that they needed yet another smart device in their lives. But over two years since the Explorer edition of Glass first appeared, it’s now the Apple Watch which has the zeitgeist – a device which almost instantly amassed considerably better sales figures than any wearable which had gone before it.

GlobalWebIndex’s data makes for some pretty good reading for Apple. In key digital markets like the UK and US, 1 in 4 online adults say they are interested in using the Apple Watch (rising still higher among the tech-obsessed 25-34s and the top income quartile – the latter being absolutely natural territory for Apple). So, after much waiting, all’s finally rosy in the wearables garden, then? Well, not quite. 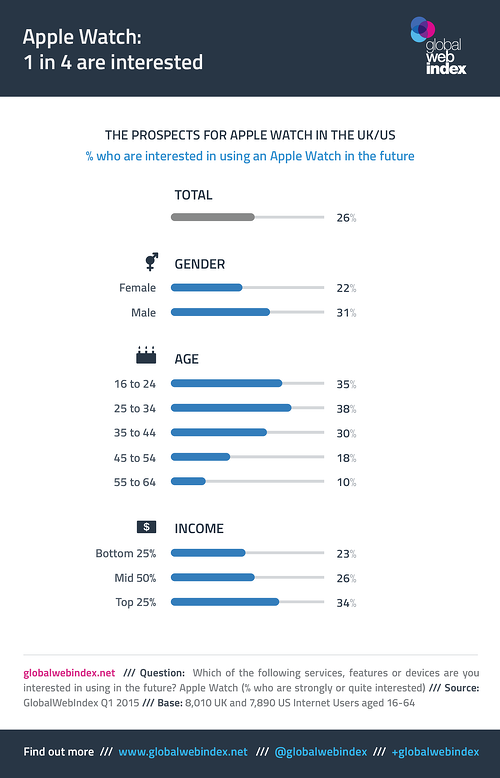 Before its release, the almost universal line was that Apple had a proven track record of being late to enter a sector which it then came to dominate. So, having seen first-to-market Google make a number of high-profile stumbles in the wearables field, the Apple Watch would be the device that really nailed it. The one that finally moved us on from talking about the potential of wearables to concentrate on their tangible, game-changing benefits and applications.

But six weeks on from its release – which feels like a fair amount of time to test such a device – there’s one key (and sadly all-too-familiar) problem which remains: in its first iteration at least, the Apple Watch simply isn’t good enough. There just aren’t enough improvements on what Google Glass was first offering some two years ago.

Allow me to explain.

I’m a big fan of Apple. I’ve had an iPhone for as long as I can remember, was an early adopter of the iPad, am a current user of an Apple TV box and – back in the day – was the proud owner of a 2nd generation iPod (as well as two of its successors). I’ve never encountered an Apple device that I haven’t loved, and was fully expecting the Apple Watch to win me over. In fact, I wanted to be impressed by it. That I instead found it a bit limited in terms of its capabilities came as a complete surprise.

Certainly, the Apple Watch gives a glimpse of how ultra-convenient the smartwatches of the future are likely to be. And to be fair, there are a large number of positives: the watch is light, stylish and there’s no denying that it has the “cool” factor (wear one on the metro at the moment and you’ll have the row of people sitting opposite you staring at your wrist). While traveling to Berlin for this year’s IAB Research Awards, I loved the fact that I could download my boarding pass to the watch’s Passbook app rather than relying on a printed or mobile version. In fact, the range of apps is much more comprehensive than some had predicted, with pretty much all of the names you’d want being there. It’s also incredibly easy to set up and synch with your phone and – if you’re a smart wristband or health-app user – having this information available on the watch is a big plus.

Beyond this, though, there are some issues. First up are the rather predictable gripes – chief among them being that the Apple Watch requires a different type of charger to the company’s other products (something which seems ironic given Apple’s desire to remove extra ports and cables from its laptops). As with most other Apple devices, its battery life is a problem too; even if you use the watch fairly lightly, it will need a power injection at least every other day. And if your iPhone dies – which can be a daily occurrence, especially on the company’s older models – then that brings obvious limitations for what your watch can do in isolation.

But it’s the watch’s basic functionality which is perhaps the biggest current bugbear. For a smartwatch to succeed, it needs to do two things: it needs to be at least as convenient as a normal watch when it comes to telling the time; and it needs to remove (or at least, considerably reduce) your reliance on a smartphone. In its first generation version, Apple Watch’s major sin is that it fails to do either.

By far the greatest frustration is the delay between looking at your Apple Watch and it telling you the time. Designed, of course, to save its highly precious battery life, the fact that the screen turns on only when it thinks you’re looking at it leads to a small delay on every single occasion you want to know the time. Still worse, you have to actively turn/twist your wrist for the watch to realize you’re after the time. That means you can’t just catch sight of the watch-face out of the corner of your eye like you can with a normal watch; you have to enact a very deliberate gesture (and more than once if the Apple Watch fails to register your first attempt). Just like Google Glass, the Apple Watch is a device which doesn’t yet do subtlety.

Nor is it one that does a good enough job of being a smart device in its own right; currently, it’s more like an extension of your iPhone. Sure, certain actions can be completed without a mobile, and Siri is pretty efficient at recognizing what you’re saying. As it stands, though, its voice recognition technology isn’t advanced enough for the Apple Watch to be as consistently accurate as you’d want it to be. It’s very good when you hold the watch close to your mouth, but that’s not always ideal (or possible) in those real-world moments when you might want to rely on it.

All too often, then, the Apple Watch became little more than a device that told me I needed to take my phone out of my pocket and respond to a message / call / notification. Yes, it’s often convenient to be able to read a message or news story on the watch rather than a phone, but the second you want to reply to an IM or email, most will find themselves reaching for their mobile.

What’s more, while it was certainly nice to know in advance what the screen on my phone was going to say, it wasn’t that much of an improvement on having your phone vibrate. In fact, at times it was much worse; the beauty of your phone being in your pocket is that you can choose when to respond to it. You might know via a vibration that a message has arrived, but you can wait until a discreet or convenient moment before reacting to it. When that notification is transferred to your wrist, it becomes much more distracting and – potentially – much more embarrassing; forget to set it to silent or airplane mode and, before you know it, various apps will start pinging you during a meeting. And everyone around you will be able to see just which apps they are.

Of course, some users will revel in the type of constant connectivity that the Apple Watch provides. They’ll love the fact that every single WhatsApp, Twitter and email notification is instantly before them, without needing to retrieve their phone. But for others, a sense of digital overload seems somewhat inevitable; I doubt I’ll be alone in not wanting to be distracted multiple times each day – and for not wanting my productivity to take a constant hit.

Clearly, the first mainstream smartwatch was always bound to split opinion – after all, it’s inevitable that there will be a time lag between a new device hitting the market and consumer behaviors evolving accordingly. In years to come, I might well wonder how I ever survived in the days when I was so reliant on a smartphone. Even so, if you’re not a hardcore tech-lover or a diehard Apple fan, it might be worth waiting for the second generation of the Apple Watch to arrive, bringing with it the inevitable wave of refinements and additions that the first version of any device always lacks.

At the moment, the Apple Watch is a device which is cool and fun, which looks pretty good on your wrist and which is bringing wearables to the attention of consumers like never before. But like the other wearables we’ve seen to date, it’s still one where its potential is yet to be fully realized.