Why Tinder Has a Lot of Positives to Shout About

In the last couple of days, Tinder has been very vocal about the demographics of its users as well as their motivations for using the location-based dating app.

As a result, we wanted to clarify the findings from our research into Tinder usage and – as we did in our original report – emphasize why our data offers a lot of good news for the app.

But first, some practical details. Our findings were based on an online survey among 95,118 internet users aged 16-64. Drawn from 34 different markets, there were 1,282 adults within this sample who said they had used Tinder in the last month.

Demographic information about our respondents is collected at the start of our survey – covering everything from age, gender and educational background to relationship status, household type, work sector and so on. At a later point, they are then asked about their usage of various social and messaging apps, including Tinder.

In short, that means we’re asking for general demographic information at the outset of our research, which we can then cross with any subsequent question asked in our survey. It’s not hard to see why this might bring different results to the information that Tinder users are willing to disclose inside the app itself – especially in relation to age or marital status.

So, where are the main positives here for Tinder?

1. Tinder has a Young and Affluent Audience

By age, the vast majority of the Tinder audience is from the 16-34 age bracket; only a fifth of users are older than this. Although the age-based pricing structure for its premium Tinder Plus service varies between markets, if we take the US model (where users who are 30+ are required to pay a higher fee) then just over a third would need to pay the more expensive rate to use the premium version.

From an income perspective, there’s much good news for Tinder’s hopes of monetizing users; some 29% are from the top income quartile, which means this group is 43% more likely than average to be using the app.

In terms of gender, the Tinder audience is skewed towards males – just over 6 in 10 users are men. That can rise even higher in places like India, but the gender ratio is more even in key markets such as the UK and US (where men account for some 57% of users). 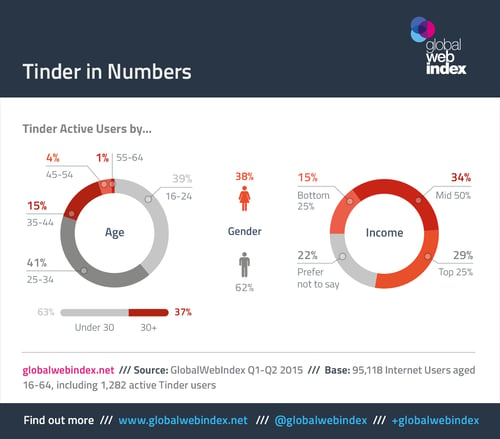 2. Tinder is Well-Placed as a “Social Discovery” App

Although Tinder came to prominence as a dating tool, it has been keen to position itself as a social discovery app. Indeed, co-founder Justin Mateen is on record as saying “I think the misconception is that Tinder is a dating app. We consider ourselves a social discovery app, more of a competitor to social platforms.” In a separate interview, he added that: “As the product evolves, we’re moving into different uses for it, doing little things that will allow people to interact socially in ways other than dating.”

According to GlobalWebIndex’s data, Tinder’s positioning as a more general social app is very much in line with its current audience: globally, about half of the Tinder audience is single, whereas just over 45% are attached (34% saying they are married and another 11% being in a relationship).

This does vary by market, however. In those regions where marriage typically takes place at relatively early ages, far more of the Tinder audience is partnered. In places where marriage ages have been creeping upwards, a greater proportion of users are single. In the UK and US, for example, it’s two thirds of users who are single.

Although such statistics are bound to raise eyebrows – and will inevitably differ from the information that users are willing to disclose to Tinder itself – there’s no problem at all here if Tinder really does have ambitions to become a “social discovery” tool. 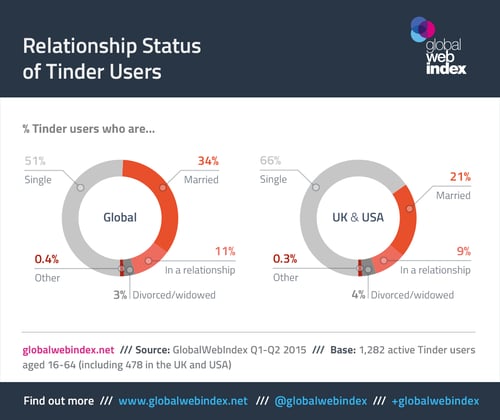 3. A Fifth of UK/US Users Pay for Dating Services

On a monthly basis, the majority of Tinder users are also engaging with online dating sites; over 7 in 10 say that they have recently visited such a site, underlining the highly competitive landscape in which Tinder finds itself operating.

But a major positive for Tinder (and for its premium Plus offering in particular) comes from the numbers who say they are paying to use an online dating service of some form. Globally, it’s just over a quarter of Tinder users who are doing this – making them over 4.5x as likely as the average digital consumer to be parting with cash for this reason. And although the figure is a slightly lower 19% in the UK and USA, that still makes British and American Tinder users some 4.62x more likely to be paying for a dating service. Once again, that makes its monetization prospects look pretty rosy. 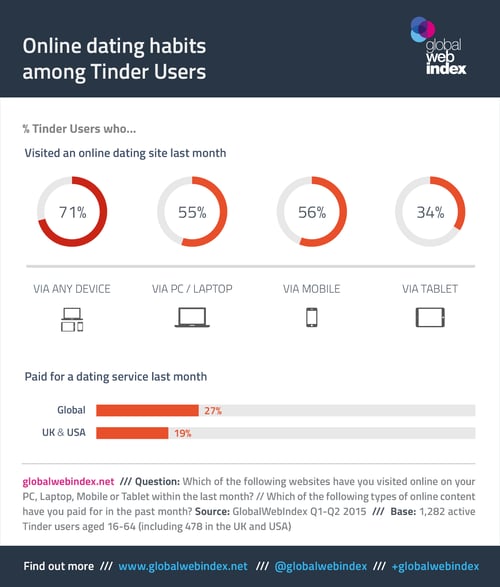