To mark the launch of our World Cup Social Trends report (you can download a copy here), today’s post focuses on what people were doing on social networks as they watched World Cup games.

To track this, GlobalWebIndex surveyed members of its Real-Time Panels in Brazil, the UK and the USA at both the start and end of the tournament – allowing us to see how engagement changed as the competition progressed and teams were knocked out.

By the end, just over two fifths of networkers said they were checking platforms to see what people were saying about games. But while this type of real-time browsing increased by 10% in Brazil across the competition, it faded in both the UK and USA (particularly in the latter – from 51% to 42% – reflecting a slight drop in interest once the USMNT’s better-than-expected run of games came to an end).

A similar pattern is in fact in evidence across all of the activities we tracked; Brazilian engagement levels either stayed the same or increased, whereas English and American behaviors dropped off a little. This is the “knockout” effect at work – social activities within a country tended to decrease when the national side was eliminated and only saw a true resurgence with the final.

Other notable trends include people being much more likely to browse networks during games rather than actively post things themselves (typically by a ratio of around 2:1). This demonstrates just how important “passive” styles of networking have become.

Finally, there were two key behaviors which were much more prominent in Brazil than elsewhere. The first was the increased importance of real-time messaging during games; Brazil was around 20% ahead of the other two countries for this activity by the end of the tournament – providing some context for the success of WhatsApp in this nation. And, although a minority behavior overall, it’s also worth noting that Brazilian viewers were three times as likely as their American and English counterparts to take a “selfie” during games – something where an obvious host-nation effect was in evidence.

For more social insights on the World Cup – including the most popular networks and the top Twitter trends – please download the report. 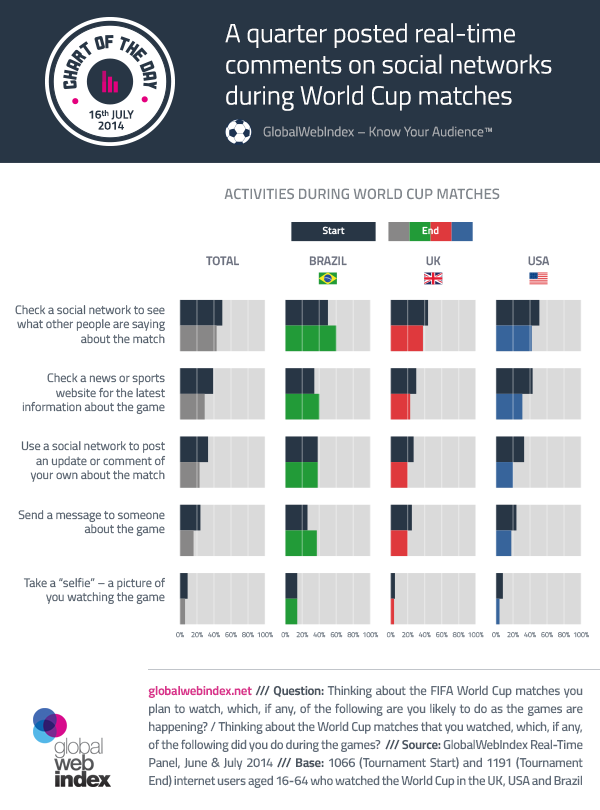