YouTube has gathered much attention in the past week with the launch of its new premium paid subscription service – YouTube Red. As it enters a crowded marketplace, however, YouTube Red faces three main challenges – but it has one big advantage.

The Challenges
Convincing its Users to Pay for ContentA significant hurdle for YouTube to overcome is convincing its users to pay for content that up until now has been free (if ad-supported). This may prove a major challenge. YouTube Red will offer both video and music streaming content as part of its paid package, and subscription to the service will also include membership of Google Play Music (and vice-versa). As our chart shows, YouTube users are more likely to be paying for all of the content covered in our chart, with a fifth of these users having paid to stream TV/film content in the last month. Good news for YouTube. However, this still means that YouTube active users are much more likely to be consuming content than paying for it. 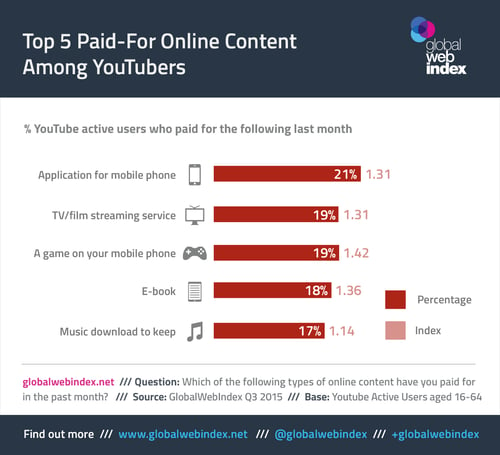 Many YouTubers are Already Ad-FreeA prominent theme in the marketing of YouTube Red has been the prospect of an ad-free YouTube experience. But many YouTubers are already watching videos without being served ads. Outside of China, 34% of YouTube users are using ad-blocking software each month and among younger YouTubers, the figures are even higher. 4 in 10 of the youngest YouTube active users are blocking ads. This means these YouTubers are already enjoying a key perk of its new paid service for free. 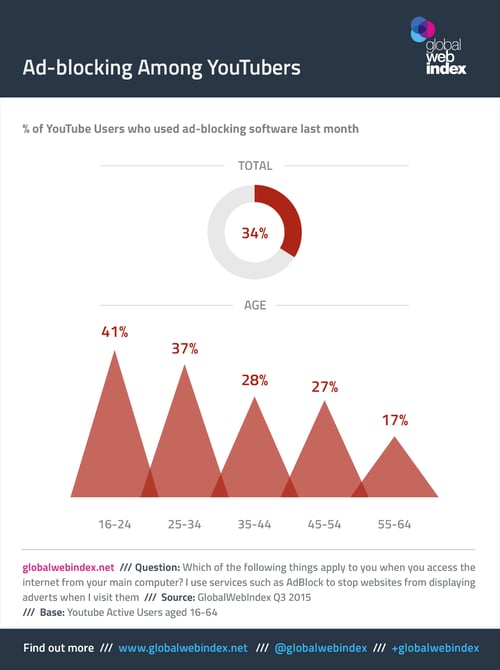 Competing with Established RivalsYouTube Red will straddle both the video and music streaming markets, both of which have seen fierce competition between providers. Netflix’s continuing global expansion, together with Spotify’s power among music streaming providers represents a substantial obstacle for any newcomer to these markets. In addition, other providers such as Amazon Prime and Vimeo are ramping up efforts in the race to integrate exclusive content into their services to bolster user numbers and increase market share.

Globally, 1 in 4 YouTube active users watched Netflix last month, while 14% listen to Spotify. With other names like SoundCloud, Amazon Prime Instant Video and Pandora also gathering large numbers from YouTube’s active user base, YouTube Red will need to work hard to convince these consumers to spend their money on a Red subscription and not elsewhere. 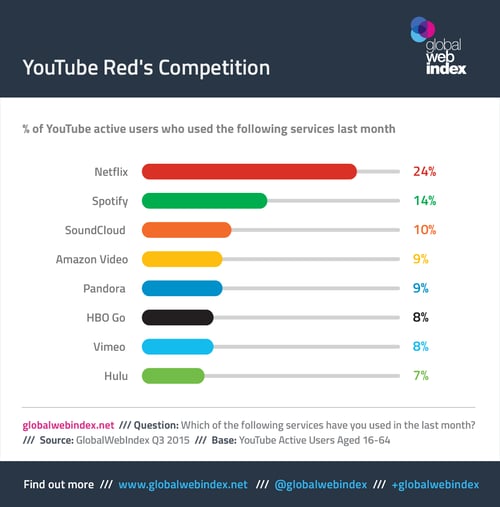 8 in 10 Internet Users Visit YouTube Each MonthYouTube Red may face serious challenges but the sheer size of YouTube’s user base gives it a big advantage. 82% of internet users (outside China) are already visiting the site each month. By region, it’s notable that only 7% of internet users in LatAm haven’t visited YouTube in the last month, while three quarters in North America are monthly visitors.

If YouTube can lure even a modest section of these visitors into its premium service, it could gather a sufficient number of subscribers to significantly challenge the established players. Certainly, YouTube Red will have some serious competition but the service is starting from a healthy position. 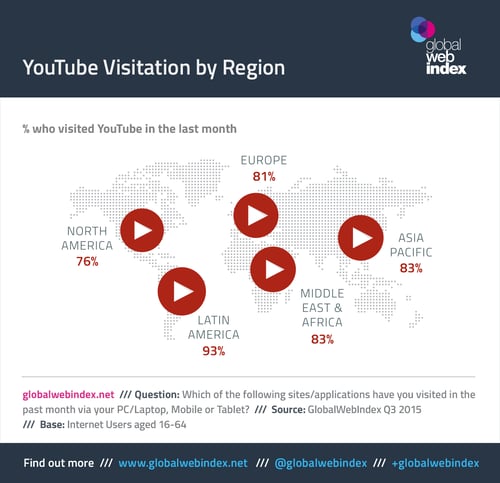