4 fundraising trends every charity should know

Charities of all sizes are increasingly embracing a data-driven approach to their activities.

The Digital Skills Report 2019 found 59% of charities want to make more effective use of their data.

But it’s frequently the case that a specialized database system is needed to ensure charities can exploit their data to its maximum effect.

On top of this, particularly for smaller- and medium-sized charities, it’s often hard to find the internal resources and expertise needed to analyze data and subsequently extract insights from it.

This won’t be the reality for much longer, however, as we’re preparing to launch a dataset exclusively around charities and charitable behaviors.

This comes at a time where many charities are struggling to build and maintain strong relationships with time-poor, information-saturated consumers.

Retaining donors has never been more critical for charities. Given the cost of new donor acquisition continues to rise, and amid growing levels of regulation, it’s become increasingly difficult to use traditional media to solicit new supporters.

With new supporters harder to come by, fundraisers are having to focus on understanding and retaining the donors already on their books.

So what is the charitable giving climate like in 2020?

Ahead of the launch of our new charity data set, we ran a preliminary custom study of 4,546 consumers in the UK and U.S., to understand the facilitators and blockers of charity giving; what causes consumers care about most; and how to create committed and trusting donors.

Here are four things we found out.

Just under three-quarters of consumers in the UK and U.S. have shown some sort of support for charities in the last six months.

The most popular form of support is to donate money, which 62% in the UK and 42% in the U.S. have done in the last half a year.

It’s important to note these figures could well be inflated by a number of factors:

For example, donating via the company you work for, adding change to a charity box, and physically giving money to a vulnerable person on the street could all be seen as acts of charity, which may also explain the key differences we see between these two markets.

But, when we dig a little deeper into the frequency of support given, these differences become more easily interpretable.

While just under half (47%) in the UK give support through donations, volunteering or sharing charity content at least every month, only 30% in the U.S. say the same.

At the other end of the spectrum, a third in the U.S. support charities every 6-12 months, compared to 19% in the UK, which is a pattern present at every age bracket.

This point of difference is emphasized by donation amounts given.

The UK are 35% more likely than the average donor to be “low donors” – those donating anything between £/$ 1-20 every 6 months. Compare that to those in the U.S., who over-index most for being “high donors” – those who donate above £/$ 100 – in the same timeframe.

The most popular reasons charity supporters give for donating are that giving makes them feel good (40%), because it’s the right thing to do (39%) and because they have a strong belief in a specific cause (38%).

This, however, masks important differences present among different demographics.

For example, typically cosmopolitan donors aged 16-24 are more likely to say someone in their position ought to give to charity because it’s the right thing to do.

But the most distinctive reason 16-24s give is because they want to change someone’s life, and this group is 1.2 times as likely as the average internet user in the UK and U.S. to say so.

For example, Small et al. (2007) found that average donations were significantly higher when participants were presented with an identifiable victim (a girl named Rokia) versus a dry statistical overview of the problem.

Indeed, the greatest amount of donations were elicited by Rokia alone, more so than when statistics and an accompanying picture of her was put forward.

The biggest differences between male and female donors suggest distinctions between the influence emotion has on the act of charity giving.

Reasons such as “I have a strong belief in a specific cause”, “the charity deals with a cause that has a direct impact on me or someone close to me” and “I feel emotionally connected to someone’s story” all resonate much more strongly with females.

Male donors generally cite donation motivations to a lesser degree, but are more likely to say their giving is driven by religious beliefs, and to say someone in their position should give to charity.

How much consumers typically give also influences their view.

It’s still a relatively small number of “low donors”, our research who remain unsure, but the index suggests that their motivations behind charity giving are less concrete.

Those who donate less than £/$20 a month are more likely than average to say they don’t know why they support or donate to charities. Yet those donating £/$100-500+ a month appear to have more distinctive reasons for giving.

They’re 1.2 times as likely to say they donate because they can see the difference their money makes, and a quarter say their giving is driven by religious beliefs.

This feels like a big opportunity for charitable organizations, then, to focus on empathetic and relatable messaging that will drive action regardless of income or donation amount.

Understanding how to apply meaning to smaller donations by formulating purposeful narrative around this might crack a huge part of the donation base.

Non-donors – those who say they haven’t donated or supported a charity in any way at least in the last 6 months – are most put off by the amount asked for by charities each month.

Over a third in the UK and U.S. say they don’t donate or support charities because they can’t commit to monthly donations.

Comparing U.S. and UK data, there are a couple of interesting differences to note, however. For example, twice the number of consumers in the UK say they don’t like being approached when they’re out and about (20%) compared to those in the U.S. (10%).

Conversely, consumers in the U.S. are twice as likely to say their donation would be too small to make a difference compared to the UK.

This seems to be a cultural disposition of how much one should donate – the UK are a lot more comfortable giving much smaller donations at a higher frequency.

Education and empowerment are needed, therefore, to show that small regular donations can make a huge difference.

Non-donors aged 16-24 also stand out for saying that supporting or donating to a charity is not something they’ve considered doing, because it’s too overwhelming or they don’t have time.

Simplification of the process is clearly required to facilitate engagement among young adults.

Besides financial concerns, a key theme among barriers to charity giving is trust.

The next three most-cited reasons among non-donors is not having enough information about the trustworthiness of certain charities, a lack of knowledge about where their money goes, and uncertainty about how their money is being used specifically.

Transparency and involvement are clearly fundamental for charities, and these issues need to be confronted in tandem with concerns about consumers’ financial commitments.

This is where blockchain could be used to improve accountability, traceability, transparency and real impact.

That’s the aim of AidCoin, a blockchain startup which employs tactics to ensure donations are spent correctly in order to make the nonprofit sector more transparent for donors and aid recipients.

Across all demographic brackets, trustworthiness is by far the most important quality a charity should demonstrate, ranging from 66% among 16-24s to 82% among 55-64s.

Some drivers of trust in charities include: ensuring a reasonable portion of donations make it to the end cause and having good management practices overall: ensuring fundraisers are honest and ethical; making independent decisions to further their cause; and making a positive difference to their cause.

Conversely, if these expectations are not met, trust can be eroded.

Recent scandals – which include excessive salaries, wasteful spending on administration, poor financial practices and exploiting vulnerable donors – have been identified as having a direct impact on falling public trust in the charity sector.

The time to act is now

A large literature study of in-profit marketing suggests that if organizations can increase user satisfaction, trust, and commitment, then they can increase user loyalty, cooperation, and other profit-related indicators.

To do this, charities have to start digging deeper into what their benefactors want from them.

Our data from this study suggests keeping charity-givers in the loop of how their money is actually being used; connecting them with other like-minded charity-givers and facilitating more flexible donation and volunteering opportunities. 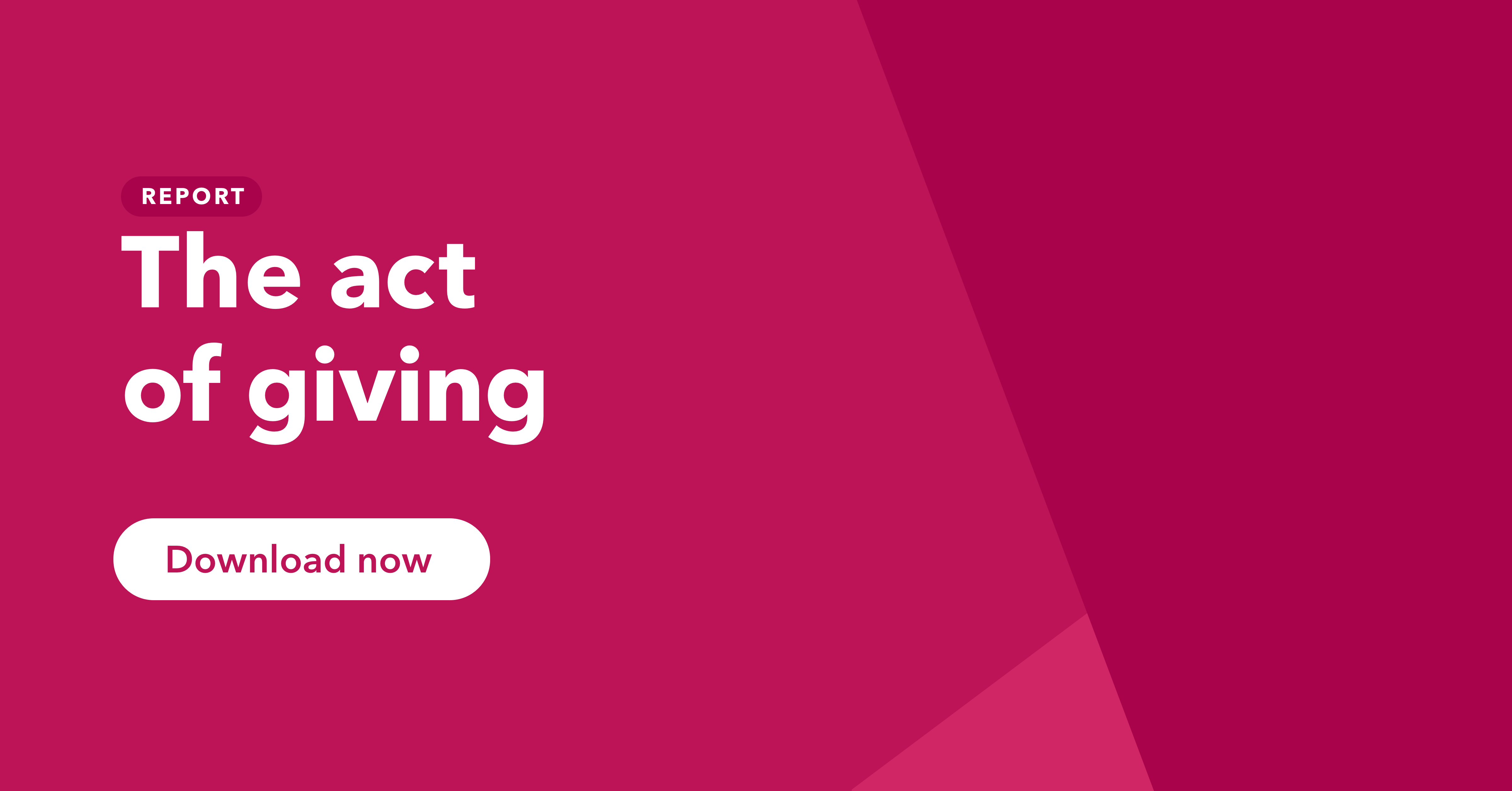