There’s a lot of talk about who will be the first to use the metaverse or which markets show the most promise. What’s the big opportunity here? And how can brands get involved?

Our data already tells us a lot about what you might need to know, but it’s important to remember that there are no hard and fast rules just yet. That’s why we’re going to talk about a market where metaverse adoption doesn’t look likely, but actually holds a lot of potential: Japan.

Using data from our Zeitgeist study and our Core survey, we establish some of the reasons why it’s important to look at the bigger picture, uncovering facts about consumers in Japan that may just surprise you.

General metaverse interest is a good indication of where the concept may or may not succeed – at least in its early stages. Just 16% of consumers in Japan are interested in taking part in the metaverse, so marketers are likely to look at countries like India (57%), Brazil, (42%), and China (30%) with more anticipation.

Still, things aren’t as straightforward as interest; there are plenty of reasons why Japan might be overlooked as a metaverse candidate.

For one, most of the interest in the metaverse comes from younger audiences. While 33% of consumers in 9 markets are interested in participating in the metaverse, the majority are Gen Z or millennials, with 42% saying this compared to just 22% of Gen X and baby boomers. In Japan, where over half of the online population fall into these older segments, this could pose a problem.

Another thing that stands out is gaming. It’s considered very important in the context of the metaverse. A lot of popular games like Fortnite, Minecraft, and Roblox, are frequently touted as proto-metaverses in their own right, and the concept has been described as the next stage in gaming’s evolution.

For Japan then, a country that some of gaming’s biggest brands call home, it would seem like the perfect combination. But that’s not necessarily the case.

Gaming is actually less popular in Japan than you might think; consumers are 24% less likely to be interested in gaming than in other markets, putting them 42nd out of 48 countries.

Then there’s the issue of tech. The country has a reputation as a tech leader today, but consumers here are 57% less likely to be interested in it – ranking them bottom of the list worldwide for saying this.

That’s coupled with the fact that they fall below the average for following the latest tech-related news or buying new tech products as soon as they can.

That could pose a real issue for VR, which is often depicted as going hand-in-hand with the metaverse. Ownership sits relatively low worldwide, but consumers in Japan are among the least likely to own this kind of device.

So it might seem like an open and shut case; consumers here won’t necessarily go for this kind of technology and brands might, understandably, have reservations about chasing opportunities here.

But our data enables us to go deeper, considering more nuanced reasons behind why Japan might actually be a more suitable metaverse candidate than you might think.

Consumers in Japan rank second globally for saying they prefer to be anonymous online. Due to prevailing cultural norms in Japan, respondents here often refrain from expressing strong opinions. So their emphasis on anonymity is clearly part of something much deeper.

Of course, this could be more to do with privacy but the two don’t always go hand-in-hand. That’s why it’s important to test it against trends in other markets when trying to make sense of this, in this case we looked at Spain and Poland.

Each rank highly for their attitudes to anonymity (39% and 41% respectively) but are also high on the list for saying they worry about how their governments track them online (30% and 36% respectively).

In contrast, consumers in Japan are actually less concerned, with just 12% saying they worry about government online tracking – ranking last out of 48 markets. The same can be said about how companies use their personal data online; Spain and Poland rank near the top, Japan remains near the bottom. And the same is true when looking at other privacy behaviors too.

So these behaviors aren’t necessarily about privacy. They’re down to cultural differences instead.

Anonymity can be liberating in Japan

Our data suggests consumers in Japan are more reserved. Compared to the average, respondents here are far less likely to say they use the internet or social media to share opinions, or post about their daily life. They’re also 80% less likely to say standing out in a crowd is important to them – something that resonates even among the youngest consumers here.

This not only has huge ramifications for the metaverse’s potential in Japan but how they might use it too.

The metaverse could be the place they feel most comfortable

While it’s something of a cultural norm for consumers in Japan to be less expressive in-person, going online is a different story.

It’s not uncommon for people to behave differently online. The majority of consumers still prefer to be themselves than an online persona (83% vs 17%) and it’s the same in Japan (84% vs 16%).

In an entirely virtual space where people can customize their appearance and, effectively, live out alternative lives, the metaverse could give more guarded users a place to truly express themselves.

While over a fifth of consumers here say they’re reserved when interacting in person, this falls to 17% online. That might not sound like much but, when compared to the other 8 markets, Japan leads outright for in-person reservation.

Among Gen Z and millennials the gap is even bigger; 24% say they’re reserved in person compared to 17% online. As the demographic most often associated with early metaverse adoption, it’s important to make sure these spaces accommodate them.

Over 4 in 10 of those interested in the metaverse here say they’re keen on meeting new people while using it, so it’s not as though shyness is going to stop them socializing; the platform they use just needs to be inclusive and accessible for everyone.

We’re already seeing diversity being oven-baked into the metaverse, such as Clinique’s Metaverse Like Us initiative, where there’s a huge focus on the first users to create a safe environment.

There are other behaviors worth noting here. Consumers are less likely to feel nervous online, while being twice as likely to say they’re curious online than they are in person, so the metaverse really opens the door for anyone to feel included.

Popular in Japan are Babiniku’s; where content creators (often, but not exclusively males), masquerade as a feminine, anime-style character. According to research, this is often a positive experience for participants, one that can recover their self-esteem.

It’s just one example, but it’s illustrative of how different consumers might feel more comfortable online than in real life.

Plenty of brands are already laying out their plans for the metaverse but our data reminds us, once again, that a one size-fits-all approach isn’t going to work.

Meta, a leading name in this space, made that perfectly clear:

“It will be created by people all over the world, and open to everyone.”

For this space to be truly inclusive, it needs to accommodate all kinds of people, and what we’re seeing in Japan cements this. Sometimes it’s about more than different appearances, backgrounds, or ethnicities; it can be deep-seated, cultural and personality-based too. Cultivate this kind of environment, and people can experience the metaverse in a way that makes them feel seen. 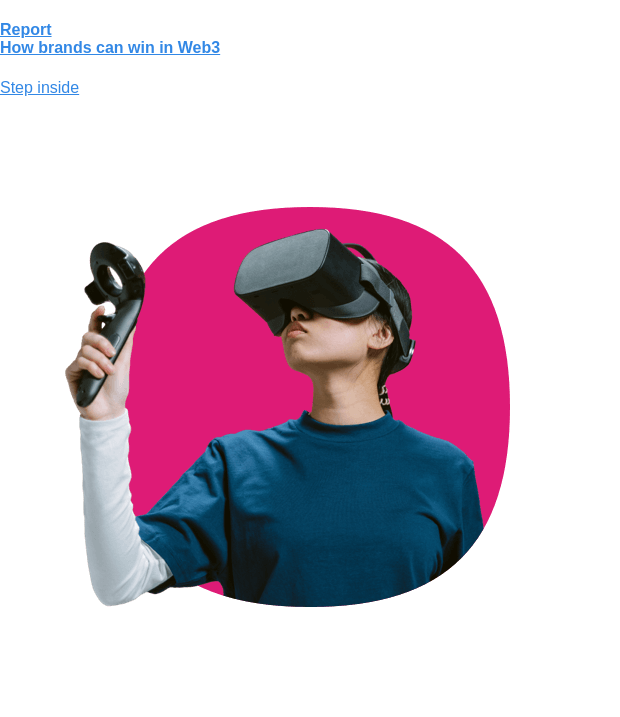