Marketing banks and financial services has tended to revolve around values of practicality and security, with customer experience tending to get less of a look-in.

But the drive to digitize customer service offerings has been accelerated by recent events.

With so much technological upheaval in the last few years, it’s little wonder that various myths have surfaced about digital services and how best to market them.

Our latest report on the world of modern banking clarifies a number of these common misconceptions and sheds light on how expectations are adapting, as consumers of all ages increasingly engage with online solutions.

RBS recently killed its digital-only service Bó, just months after its launch. Though the bank was careful not to describe it as a failure, this experiment raises the question of who new digital products should focus on.

We’re used to thinking about millennials as pioneers of digital banking and the natural target market for such products. But this short-sighted assumption overlooks just how widespread online banking has become.

It’s sometimes assumed that baby boomers are distrustful of online banking; whereas our data shows that nearly as many 55-64-year-old internet users (67%) bank online each month as 25-34s (72%).

While this does drop for mobile banking (49%), the former age group isn’t far behind 16-24s (53%) in terms of how heavily this device features in their monthly banking routine.

This suggests that a lack of engagement with digital banks might be explained by other factors, such as fintech start-ups spending 500% more on marketing to millennials than any other demographic group. In reality, there may be a bigger potential market here than some marketing campaigns suggest.

Individual attitudes can ultimately be a better predictor of consumer expectations than age.

For example, 45% of those who say that having the latest technological products is important to them prioritize well-designed apps and mobile features; and this figure remains relatively high (38%) among 55-64s.

So while segmenting by age can give a rough view of banking preferences, there are still differences within age groups. Particularly with something as personal as a bank account, differing attitudes in the market have to be recognized.

Though the myth that online banking is reserved only for young, tech-savvy internet users is easily debunked, we can take this a step further and suggest that digital banks (as well as traditional banks marketing new digital offerings) begin casting their nets beyond their prior target market.

Myth 2: Challenger banks stand to benefit most from the current situation.

But at a time of crisis, “traditional” banks have the chance to trade on their historical branding. What’s more, our research suggests that consumers are yet to fully commit to digital banks as their main provider.

Digital banks have been gaining in popularity, largely thanks to their unique offering of innovative features that help customers track and manage their everyday spending.

However, digital bankers remain reluctant to pass responsibility for all their banking requirements onto challenger banks.

While those with a digital bank account are just as comfortable using this service to pay for bills and transfer money, there’s a significant drop when we look at receiving salary and managing investments: 57% of bankers use their traditional account to receive their salary, which falls to 31% for digital bank accounts.

If the current situation has made anything clear, it’s that the biggest incumbents often benefit from a sense of trust that their younger competitors have yet to fully realize.

The crisis has drawn attention to the digital shortcomings of traditional banks, but also afforded them the opportunity to highlight their main advantages over challenger banks.

Though many expected digital banks to flourish in the current climate, Europe’s top challenger banks recently witnessed a drop in digital downloads.

Despite industry newcomers having the edge when it comes to online banking, it could be that “spending” accounts become less relevant as customer concerns about the security of their money intensify and bankers need to access loans or savings.

Yet, this trend is likely to reverse as economic confidence starts to pick up, and as younger bankers begin to play a greater role in shaping this space.

Age is ultimately a key determinant of trust in digital banks, with younger bankers often demonstrating less skepticism toward them: 41% of digital bankers aged 45-54 say they don’t feel assured their money is secure in a digital bank account, compared to 12% of those aged 25-34.

By the same token, though 16-24s currently represent the smallest proportion of online bankers, they’re already leading the mobile banking revolution. Their need to financially plan is set to grow in coming years, which will surely enhance their contribution to the banking sector.

As trust becomes less of an issue, customer service is also well-positioned to steal some of the limelight.

While the biggest players seem to be benefiting for the moment, losing sight of the new, digital-first consumer experience could see this advantage evaporate.

Well-established institutions will need to continue investing in fintech and tailoring new digital banking solutions if they want to remain on top.

Myth 3: Banking is a means to an end, it’s not meant to be an experience.

If challenger banks could offer one lesson, it would be the need to put customers front and center in an industry that has previously built its success on prioritizing other areas.

Without a digital trump card, traditional banks must rely on their monetary offerings or face the brunt of consumer dissatisfaction upon failing to meet the standards expected of them.

Past examples demonstrate how quickly consumers can jump ship, with thousands of UK bankers switching from Halifax in the space of three months over higher overdraft interest rates.

It’s for these reasons that traditional institutions should take steps to identify the consumers most likely to switch and understand the reasons behind their intentions.

Early adopters (who say they’re usually the first to know about new technology and aim to have the latest products) are more likely to be fickle where banks are concerned: 57% of this group believe they’re likely to switch banks in the next 3-6 months, compared to 23% of those who don’t make having state-of-the-art technology a personal priority.

Though making an appearance across all age groups, early adopters are concentrated among younger bankers: 56% of 25-34s fall into this category, compared to 29% of 55-64s.

Unsurprisingly then, this group of likely switchers expect more from banks in terms of the overall experience.

They’re more likely to show excitement in the face of all of the banking features included in our chart, with the exception of monetary rewards – indicating that, for this group, style is just as important as substance.

Support for sustainable and eco-friendly businesses takes the spotlight among those intending to switch, suggesting the need for banks to start looking beyond financial security and make ethical commitments part of their branding strategy.

Tackling issues that harm the global community and environment is one way of communicating these values, and doing so will hold banks in good stead among likely switchers.

Our research also shows that digital bankers are more likely than their traditional counterparts to want additional and innovative features from banking services. When it comes to 24/7 service via banking chatbots and round-up features, for example, there’s at least a 10-percentage-point difference between digital and traditional bankers.

Given their list of expectations, digital bankers are unlikely to forgo a sophisticated banking experience for an altogether traditional one.

1 in 5 bankers in the U.S. and UK ultimately say they’re likely to switch in the next 3-6 months, which represents a significant opportunity. Financial entities wanting to gain or retain these customers should therefore aim to create standout banking experiences able to deeply immerse consumers in their financial lives.

Our third wave of coronavirus research shows that public perception surrounding how banks have responded to the coronavirus outbreak is generally positive: 64% of internet users across 17 markets approve of how they’ve handled the situation so far.

Having come under fire during the last global downturn, many are now viewing banks in a positive light.

However, positivity varies significantly by country and has altered over time.

Banks in South Africa and Australia, for example, have made the most impact in turning the tide of their approval ratings; where mortgage breaks have been offered, fixed savings liberated, and overdraft charges frozen in many cases.

At the other end of the spectrum, public opinion toward banks has deteriorated most among Spanish and Italian consumers; amid concerns about wider economic mismanagement and frustration over cautionary approaches to lending.

What our data and the above examples reinforce is the growing demand for quick policy changes that can ease current financial burdens, as well as the need for reassurance among consumers that their money is in safe hands.

While liquidity buffers may not be sufficient to meet consumer demands in all cases, our data suggests additional ways banks can differentiate themselves from their competitors, both during the crisis and going forward.

Traditional banks now have the opportunity to reconsider how integrating customer insight and digital transformation into their strategy can contribute to future growth.

Only time will tell whether current levels of digital disruption in the banking sector will outlast the pandemic. But decrypting these common banking myths presents a clear business case for why they should. 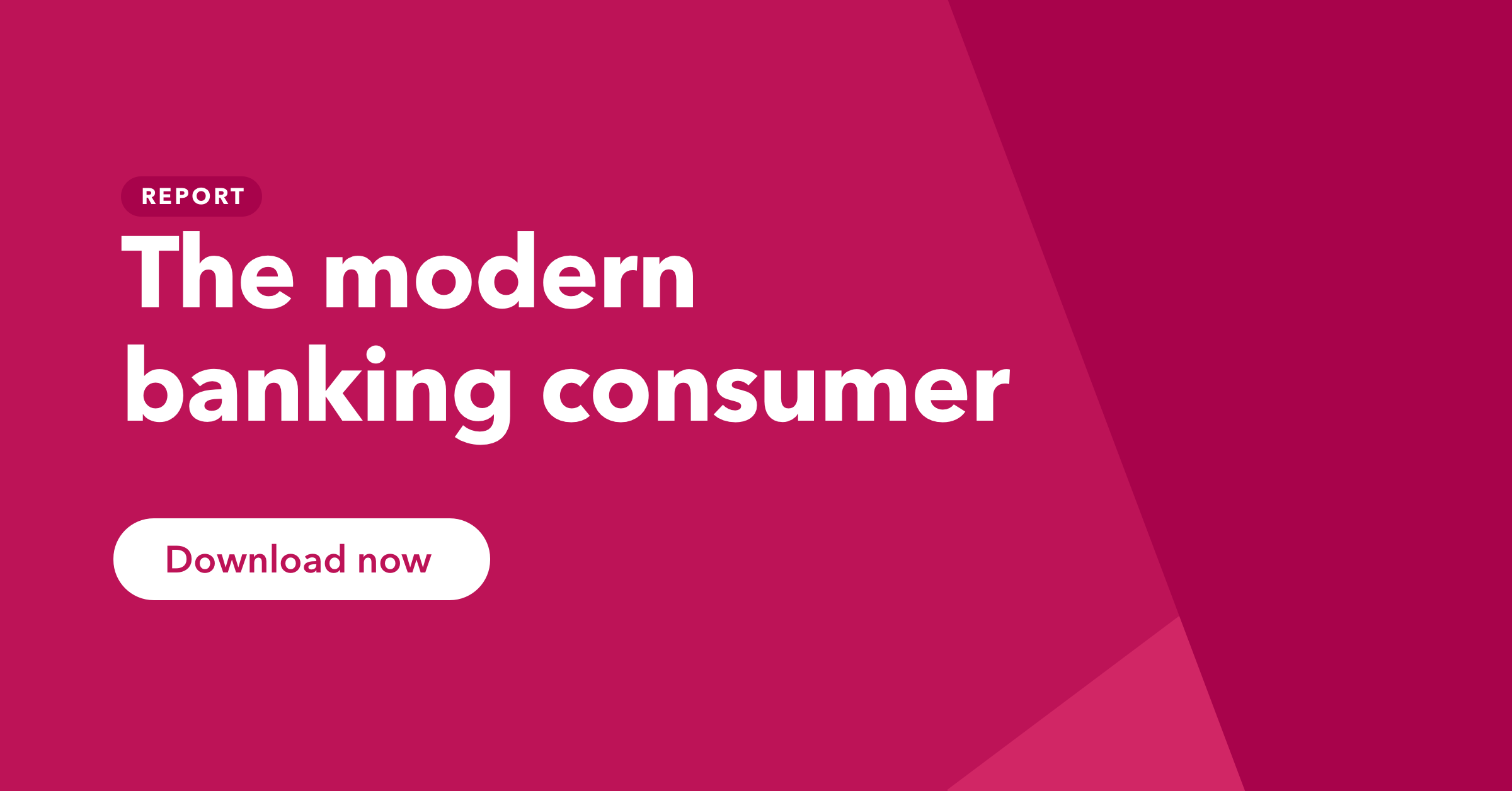