Breathe In and Read On: The Latest Insights on Mental Wellbeing

Following our blog on the mental health campaigns that made a difference, and with mental health awareness week underway in the U.S., here are the most important findings from our latest report on mental health and wellbeing, with insights for brands, businesses and everyone in between.

1. Wellbeing around the world.

Between 2012 and 2017, the global wellness industry grew an estimated 12.8%, nearly twice the rate of global economic growth.

This amounts to a market now valued at over $4 trillion, much of which is underpinned by a growing problem among consumers: anxiety.

Forty million adults in the United States (approximately 18% of the population) now suffer from an anxiety disorder, according to the Anxiety and Depression Association of America.

Mental wellbeing has become such a prominent topic that brands, businesses, and social media platforms alike are expected to create environments and tools that promote positive wellbeing.

From the sales of Fitbits, to the plethora of activity tracker apps, and the rise of terms such as flexitarianism and mindfulness entering our everyday conversations, health and wellbeing are more important to consumers than ever.

What’s important to note here is the impact stigmatization has on being diagnosed with a mental health condition; in the U.S. and UK, it’s much more accepted for people to admit they have a mental disorder.

For markets in Latin America and the Middle East and Africa, figures are relatively lower for self-identified mental conditions, but increase when we ask if anyone has a mental health condition in their household.

Communication around mental health in these markets tends to be more effective if aimed at society rather than directly at individuals.

In the UK and U.S. where some of the highest rates of self-identified mental health conditions are present, we see an appreciable increase from the national average as the incidence of mental health issues appears to be more prevalent among Gen Z.

Because of this, we ran a special survey of 4,208 consumers aged 16-64 in these two markets, to uncover their attitudes and behaviors toward mental health and wellbeing.

It’s clear that consumers associate anxiety and stress with key issues that those suffering from mental health problems have to face.

Financial worries are the biggest cause of stress for consumers in the UK and U.S., by some margin. Concerns about personal finances affect each age group; 50-54% of 18-64s cite financial concerns as their primary source of worry.

Other prevalent stressors include thinking about the future, personal relationships, family life, and work.

There are noticeable differences between age groups, though. Thinking about the future, for example, is significantly more stressful for 18-24s (49%) than for 55-64s (27%).

For example, females tend to be more likely to cite most of the causes of stress we surveyed, with the biggest differences between females and males being family life (40% vs 29%), self-image (35% vs 22%) and childhood experiences (31% vs 20%).

The only stressors males are more likely to cite than females are work (38% vs 27%) and misuse/ overconsumption of legal stimulants such as caffeine, alcohol or smoking (19% vs 12%).

Considering the worrying prevalence of male suicide, and its link with emotional repression and ‘toxic masculinity’, there could definitely be an element of reluctance here in openly admitting stressors.

3. “To brand” means to leave a mark, so make it positive.

Not simply because they allow brands to be creative and hone in on specific target audiences – mental health awareness campaigns give brands the chance to create lasting, meaningful impact.

Intelligent use of data helps marketers interrogate the numbers and understand where the barriers to communicating lie, building campaigns that do cut through.

In May of this year, Instagram drew attention to mental wellbeing by launching a campaign featuring several influencers with a personal connection to mental health experiences, igniting conversation using the hashtag #RealConvo.

“Every day on Instagram, we see people share their mental health journeys and connect with communities of support. From dedicated accounts around an issue to unique hashtags adopted by groups, these communities are helping to make illnesses that are often invisible to friends and family visible through photos and videos.” Kevin Systrom, co-founder and CEO of Instagram.

The desire for more honesty and authenticity was likely the inspiration for Burger King’s hotly debated “Real Meals” campaign, which raised awareness around mental health issues through its partnership with Mental Health America.

The challenge for brands is to go beyond merely igniting a dialogue about mental health, and sustain a meaningful commitment to the numerous issues that make up mental health.

But what role do people with a self-identified mental health condition think brands should play in their lives?

Over a quarter of internet users globally who self-identify as having a mental health condition want brands to make them feel like a valued consumer.

Too often brands’ mental health campaigns can be seen as token gestures, disingenuous or simply tone-deaf, and so it’s no surprise being valued and spoken to in an authentic way is important to this audience.

This group is 1.2x more likely than the global average to want brands to support charities, and is more likely to donate to charity at least once a week, this behavior being prevalent in every age group.

Things like sustainability, business processes, ethical sourcing, employee volunteering and fundraising should all be considered and incorporated into a brand’s strategy.

4. Mind your business, and your employees.

According to the Global Wellness Institute, workplace wellness is a $48 billion market that is only set to grow.

And with depression and anxiety costing the global economy an estimated $1 trillion each year in lost productivity, startups are addressing this with innovative products, while other firms are investing in programs designed to improve their employees’ mental and physical health.

When asked how they feel talking about mental health at work to managers or colleagues, 22% in the UK and U.S. say they feel either somewhat or very uncomfortable.

This comes as research in Scotland found that 48% of people don’t tell their employers about mental health concerns for fear of losing their job. In addition, 55% thought that someone in their workplace with a mental health problem would be unlikely to disclose it for fear of being moved or passed over for promotion.

To counteract these concerns, our data reveals that promoting a healthy work-life balance was the number one role businesses can and should play in helping employees’ mental health and counteract concerns of being unfairly judged.

64% of UK respondents and 59% of U.S. consumers say this should be top priority.

Creating a supportive mental health policy and providing mental health training to managers also resonated with consumers, but fostering a healthy environment that moves away from the 24/7 working lifestyle is critical.

When asked which treatment options consumers would be willing to try in order to reduce stressors and anxiety in their lives, the most popular choice in the UK and U.S. was taking a wellness holiday/time off, followed by increasing their physical activity.

Outside of wellness holidays, talk therapy (i.e. counseling), creative therapies and healthier diet choices were also popular treatments that respondents would be willing to try.

But when asked which of these treatments would be most effective for them personally, options that required greater commitment from individuals, like exercise and diet changes, were chosen comparatively less as opposed to methods that included taking time off, counseling and medication.

This is perhaps surprising given the extensive evidence that physical activity can greatly improve your mental wellbeing, but it does suggest that treatments which require greater commitment are perhaps viewed more critically.

Consumers clearly take into account the likelihood of them carrying out a remedy when evaluating its effectiveness.

Abstaining or reducing alcohol consumption or smoking also comes far down the list, as treatments they’d be willing to try and for their perceived effectiveness, although consumers in particular markets may soon have little choice but to cut out their smoking.

The government in the UK has announced its aim to end smoking in England by 2030, and in Barcelona people will no longer be able to smoke in designated outdoor areas of bars and restaurants.

Where males most differ from females seems to reflect their greatest sources of stress. As noted earlier, the main root causes of anxiety for male respondents was their work and overconsumption of legal stimulants.

Similarly here, males are more likely than females to say they’d be willing to try quitting alcohol and smoking, and more likely to say taking a wellness holiday/time off would be the most effective treatment for them.

Meanwhile females cite talk therapy, medication, meditation (both in real life and on apps), arts and creative therapies, and alternative therapies (e.g. acupuncture) to a greater degree than males.

This indicates more of an open-minded,a holistic approach to mental wellbeing, although this isn’t necessarily reflected in which treatments they think would be the most effective.

Whereas males think taking time-off would be an effective treatment for them, females seem to perceive more conventional routes such as medication and counseling as most effective.

These demographic differences are crucial in understanding the complex perceptions and attitudes UK and U.S. consumers have towards mental health, and should be used to inform subsequent mental health awareness campaigns and their targeting.

For the full range of data and insights, as well as an additional look at the effect of social media on mental health, download our Mental Health and Wellbeing report below. 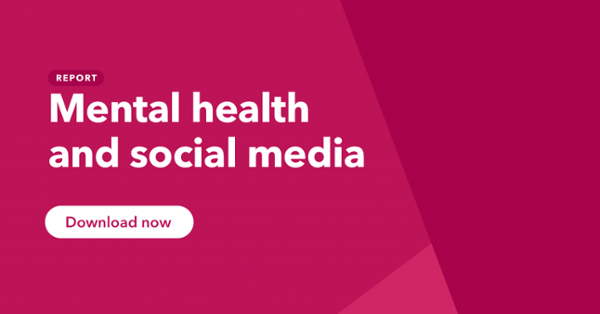