As we head further into 2019, we have a chance to make predictions for the year to come, and check in with what transpired from the year just gone.

Our data identifies some developments that took hold in 2018, but didn’t register as much wider attention. Here are five trends from last year that might have slipped under your radar, and how they might develop in 2019.

1. Video calling may pave the way for virtual hangouts. 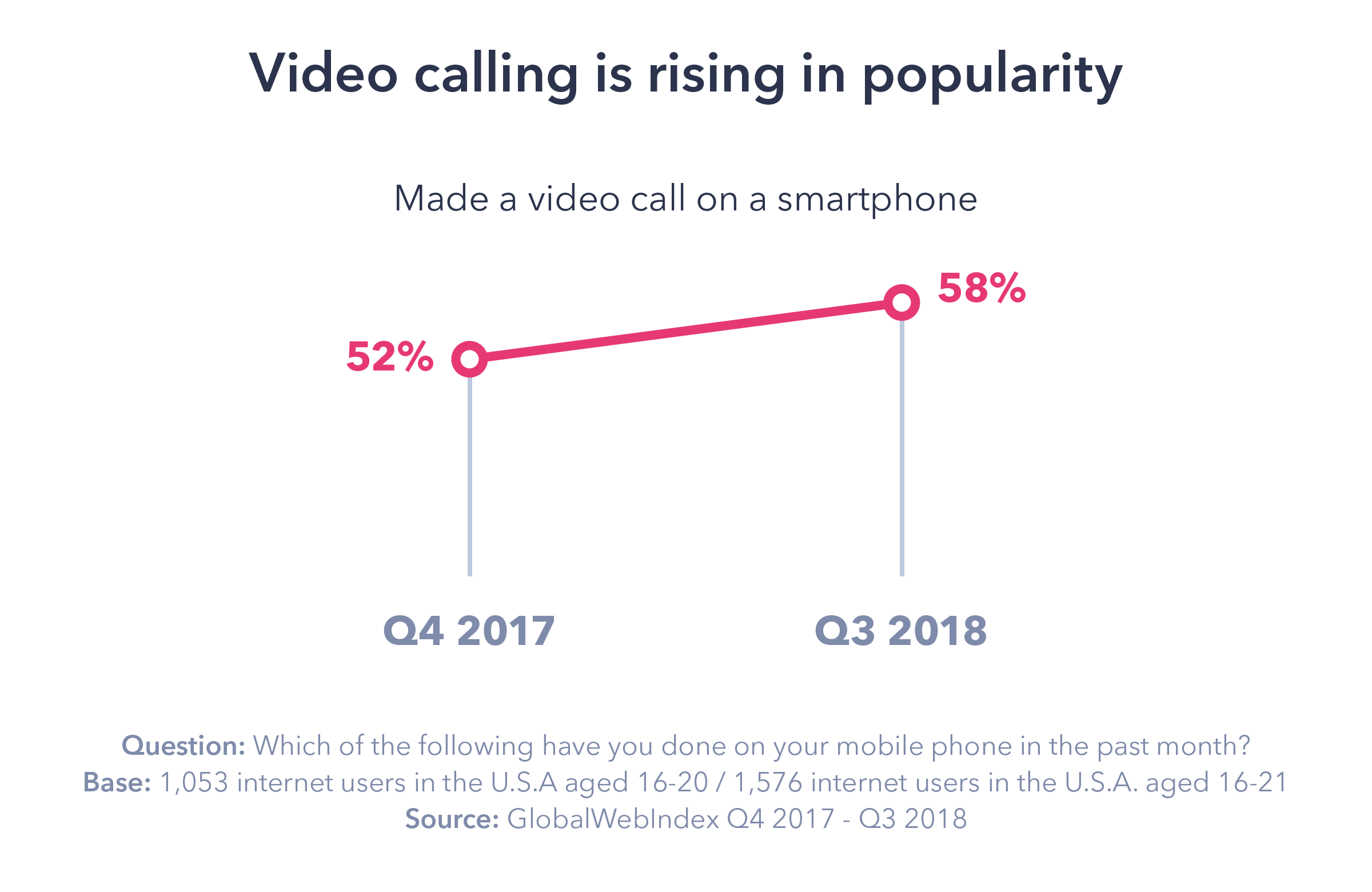 Whenever mobile video is discussed – particularly for younger age groups – it’s almost always in the context of entertainment.

Watching videos on mobile rose sharply last year, but there’s another type of video on the rise.

Video calling is often talked about from a business perspective, like using software to keep in touch with remote colleagues. But in 2018, video calling increased for all nearly all demographics, including students as well as professionals.

All age groups are increasing their number of video calls, but Gen Z are the ones to watch, as they could define how the trend develops in 2019.

Social services like Houseparty and Squad revolve around video calling, allowing friends to hang out when they’re not physically close. They point towards a possible new frontier in social media, where entertainment and communication are more closely interlinked in virtual hangout spaces. 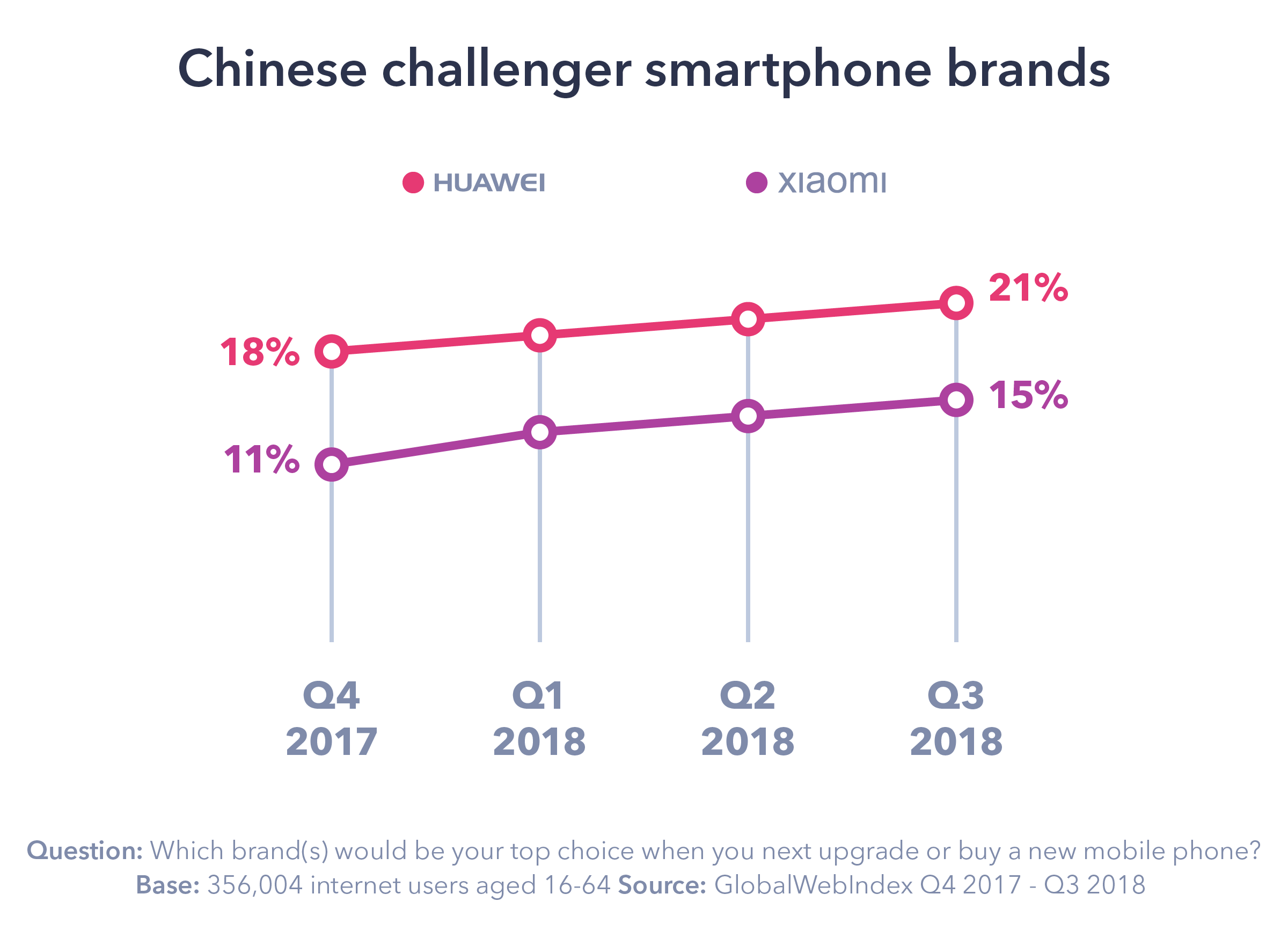 The global smartphone market continues to be dominated by Samsung and Apple, but there are some early signs of change.

The parties doing the most to upset the status quo are Huawei and Xiaomi, the Chinese phone manufacturers headquartered in Shenzhen and Beijing, respectively.

Just days into 2019, Apple issued its first profits warning since 2002, and, while it’s not the only factor, the growing market share of these Chinese challengers is one of the reasons behind Apple’s diminished position.

Our data finds not just an increase in ownership of those challenger brands, but an even sharper increase in consumers considering purchasing them.

There are caveats here, though. Saying a brand is under consideration doesn’t mean consumers will actually buy the brand, or be comfortable with moving from one mobile operating system to another. But it’s increasingly clear that consumers are open to a wider selection of brands when buying a new phone, with Huawei and Xiaomi squarely in the mix.

3. Travel is getting a revamp through apps. 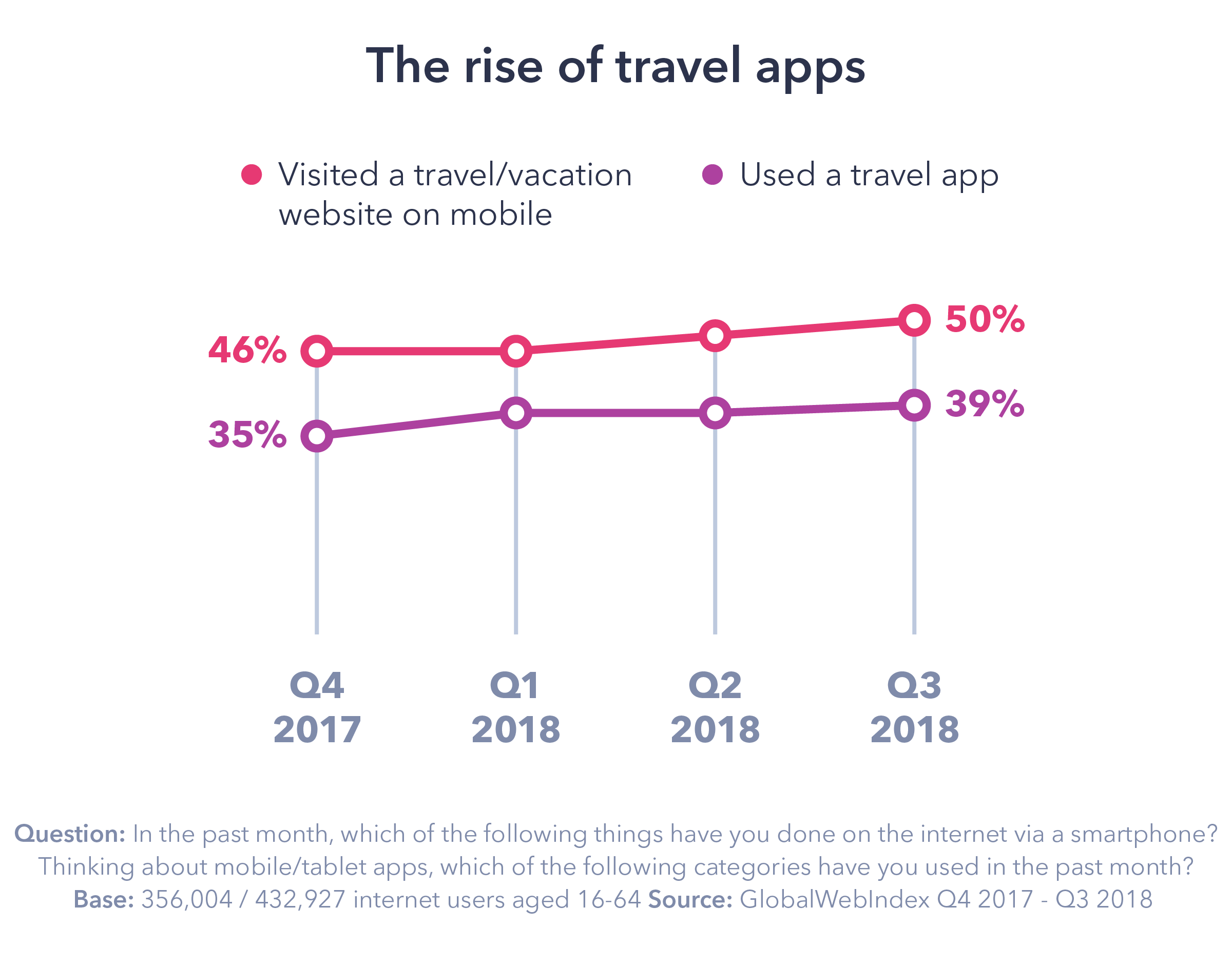 While almost all activities are now mobile-first, some are worth paying particular attention to. Travel is one example.

There’s an increase in internet users going to travel websites on their mobile, as well as those using travel apps.

The growth in travel app usage is one of the biggest and most consistent growths in any app category we track.

Both developments point to fundamental changes in travel behavior. The smartphone’s becoming more relevant to travelers in the planning, buying, and visiting stage of their journeys.

Mobile has compressed many aspects of travel, from tickets to accommodation, through navigation and check-in, allowing internet users to access everything they need in one place.

You could argue this goes even further, thanks to the simultaneous growth of visual platforms like Instagram. They provide the ideal forum for travel inspiration to take hold. Researching, booking and arranging a trip is just a few taps away from seeing a tempting vacation spot. 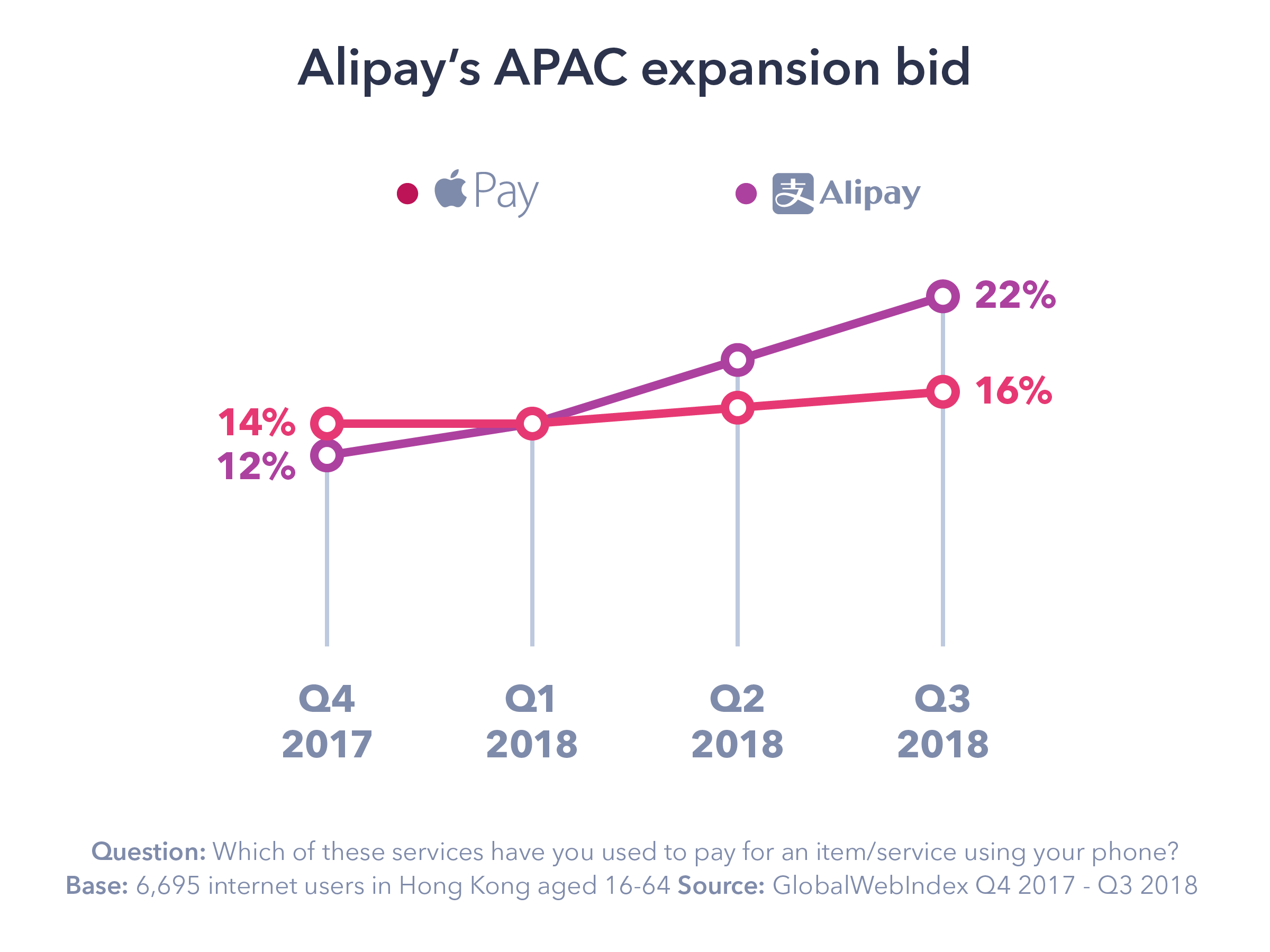 South East Asia will be a battleground across a number of online industries in 2019.

With hundreds of millions of users due to come online, tech companies are jostling to compete for potential new customers.

Mobile payments, where a lack of infrastructure for credit cards or PCs means smartphones have become crucial for commerce, is seeing a lot of activity.

Hong Kong is an exception to the regional picture. It’s a mature market, with high penetration for internet access and credit card ownership. But, bordering China, it’s a handy case study for tracking the battle between Western and Chinese mobile payments services across the region.

Apple Pay took an early foothold, leading the pack at the start of 2018, but as the year progressed, Alipay rocketed to the top. Alipay’s parent company Ant Financial has benefited from a device-agnostic approach that lets the service spread easily across users, as well as a good number of visiting Chinese who expect to use the payments services they’re comfortable with when they travel.

But they’re far from the only contenders. Dreams of continental domination from Apple, Ant Financial, Tencent or PayPal in South East Asia may be checked by local providers with market-specific expertise.

Both Grab (based in Singapore) and Go-Jek (Indonesia) have spun off payments services from popular ride-hailing apps that are well placed to make waves in the region.

So far, we’ve covered some trends that might not have attracted as many headlines as they emerged through the last 12 months. There’s one trend we can now turn to that many expected would take hold, but hasn’t yet done so. 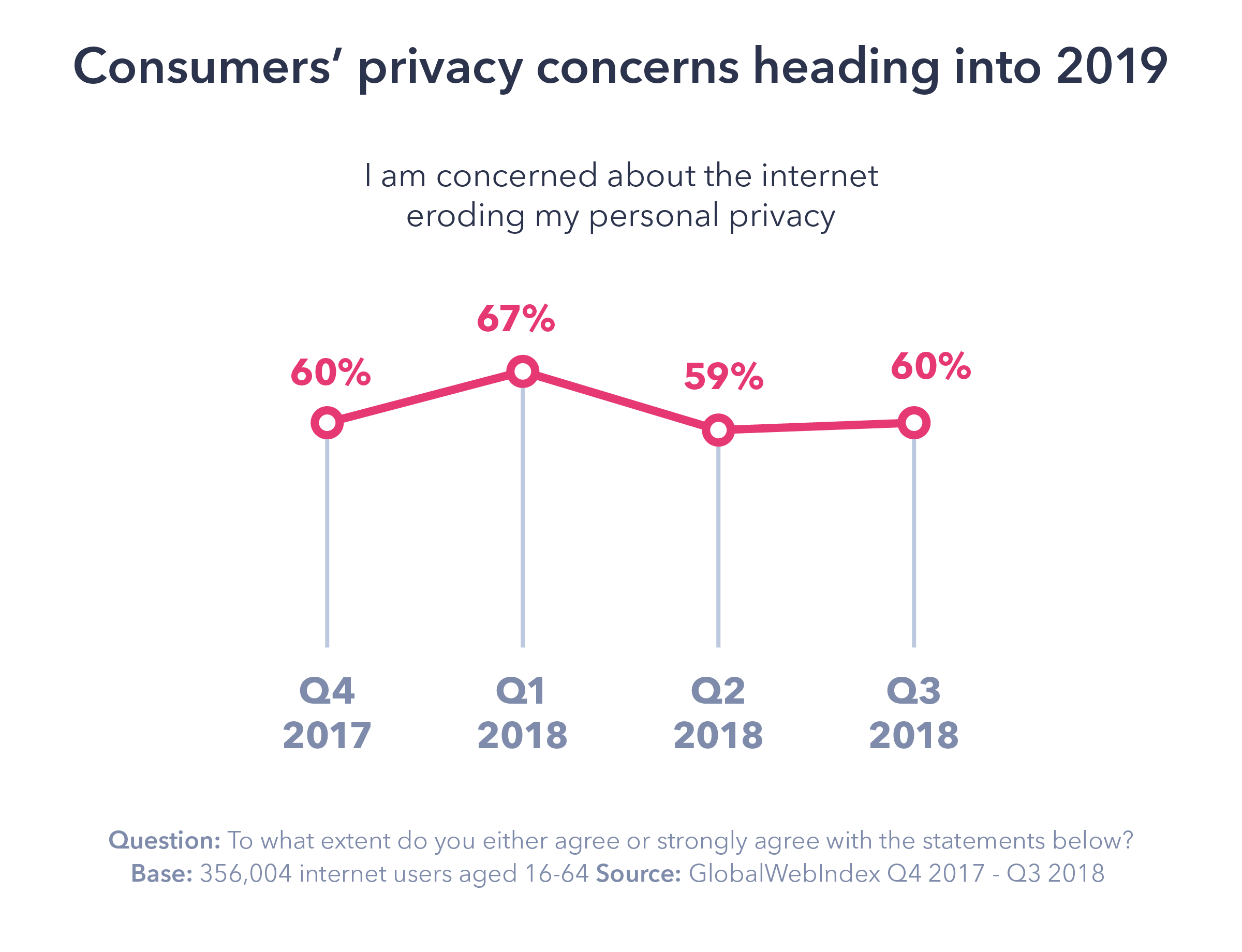 In the first months of 2018, data privacy was rarely out of the headlines. There was the long countdown to GDPR Day on May 25, as well as the revelations about Cambridge Analytica and Facebook.

When fieldwork for our Q1 2018 data took place during those months, we saw a spike in the percentage of people concerned about how the internet would affect their personal privacy. But in our later waves of research, we found that it was just that – a spike.

The GDPR, and scandals in the social media industry, led to consumers feeling deep concern at the time, but so far it hasn’t instigated a sea change in consumer attitudes.

Once the GDPR passed, consumer sentiment reverted back to normal, making this a 2018 trend that, despite a lot of industry focus, hasn’t quite taken off in the way that some expected.

A bespoke survey we carried out in September 2018 found consumers’ biggest frustrations with the GDPR were from a user experience perspective, especially having to read long privacy notices. The legislation has created some fatigue with users who have become used to seamlessly browsing websites and apps – and this may have chipped away at the concern they felt early last year.

That’s not to say data privacy has become irrelevant – far from it.

Legislators have already been busy this year. One of the biggest headlines at the start of 2019 was the €50 million fine handed down to Google from French regulators CNIL, who cited Google’s blanket opt-in to data collection as unsatisfactory.

2019 promises more tension between websites and apps who have to provide transparency to their users about data collection, without compromising user experience.

Not all trends are obvious, and not all of them pan out as expected. One thing is for sure: 2019 promises even more twists and turns.

For brands to keep a finger on the pulse of what’s really happening in the industry, granular consumer data, harnessed at regular intervals, provides vital insight and direction.