Hype aside, what do people actually think about 5G?

As highlighted in our 2020 trends report, there’s an ongoing tension between wanting to stay connected and contactable, and wanting to be autonomous enough to “switch off”.

This means the introduction of 5G, which brings with it faster, improved wireless technology, comes at an interesting time.

5G is the next generation of wireless tech found at the heart of cellular and communicative networks.

As with any upgrade, faster speeds and consistency are a guarantee, but 5G promises to be up to 10 times faster than what current 4G LTE technology allows.

It guarantees faster data speeds, a reduction in lag time, and a greater density for smart devices – factors that could eventually become catalysts for things like autonomous driving and connected cities.

But while there’s been a lot of hype around the potential of 5G, relatively little is known about what consumers actually think about it.

We ran a custom survey in the UK and U.S. to explore the adoption, perception, and obstacles of 5G.

Here are four things we learned.

1. Awareness and demand for 5G is on the rise.

In the UK and U.S., two countries at the forefront of the 5G revolution, 83% of internet users correctly know what 5G refers to.

Consumers in both markets are experiencing 5G for the first time via their smartphones, making mobile an important testing ground for the new technology.

Instinet analyst Jeffrey Kvaal expects “a large increase” in 5G unit sales for 2020 – although he thinks most of these sales will come at the expense of 4G devices, rather than a rush of upgrades.

Things will develop quickly this year: Verizon expects to launch 20 devices with access to 5G by the end of 2020, in addition to the seven that currently exist. Alongside this, both Verizon and AT&T plan to add new cities to their coverage, with the latter expecting to have nationwide coverage in the not too distant future.

But do people actually think of 5G as an essential feature? Yes, and to a much higher extent than before.

Last year, we found only 27% of smartphone owners in the UK and U.S. said 5G compatibility was an important smartphone feature.

Fast-forward to our most recent custom survey, and 42% of 5G-aware consumers say compatibility is an important feature for their next smartphone purchase.

Slightly different question formats and base audiences could well be influencing and inflating figures here. However, we can confidently say that 5G has become more sought-after as an integral smartphone feature, and will be a key selling point for all mobile providers going forward.

This has largely been facilitated by advertising, which has generated awareness and excitement among consumers.

The desire for 5G varies demographically, however.

While 45% of 5G-aware U.S. consumers say 5G is important in their next smartphone purchase, this drops significantly to 27% in the UK.

Similar differences occur when segmenting by gender –one in two 5G-aware males regard 5G as a key functionality, compared to only 1 in 3 females.

Why 5G is useful or integral to a person’s day-to-day online activities can be hard to convey, especially as audiences at different technology adoption stages may perceive 5G to be beneficial in different ways.

For example, early adopters (those who say they’re in possession of a 5G-enabled smartphone) are the most likely to be excited by coverage in difficult-to-reach locations.

On the other hand, the early majority (those who will trade in their current smartphone for one with 5G either as soon as it’s available or when it’s more affordable) are the most likely to be swayed by downloads speeds in comparison to 4G.

The late majority (those who plan to wait out their current contract and assess the benefits of 5G or see whether others find 5G phones useful) are generally less sure of what they’re most excited about.

However, both the early and late majority are more likely to be excited about 5G outperforming household broadband speeds – compared to early adopters, who already have a 5G-enabled phone.

As 5G coverage is still in the process of being rolled-out, inconsistent or unreliable coverage may mean household broadband speed is still the better option when at home – at least for now.

3. Large venues will be a key touchpoint.

We asked what 5G-related features consumers in the UK and U.S. are most excited about, and our results indicate that their understanding of 5G is still quite simplistic.

Understandably, there’s more excitement around tangible benefits that have an immediate impact, like better quality video streaming and better battery.

The one tangible benefit that resonates across all technology adoption stages is better service in locations with poor reception.

Large venues require massive amounts of data. At any given performance, show or game, there are fans, venue owners, franchises, concession businesses, broadcasters, and network operators all competing to share information as quickly as possible.

Currently, a hybrid model of WiFi and 4G is in place to serve the connectivity needs of individuals in these areas. But often, this model isn’t enough – especially as fans begin to demand more, feeling the pull of an arguably better experience at home in front of the TV, when supplemented by other screens.

Given the increase in data consumption at sports venues (sports venues are seeing a 67% growth in data-usage year-on-year) the time is ripe for an innovation that will improve the sports entertainment experience.

In fact, research commissioned by software specialists Amdocs suggests that most people will first experience 5G connectivity at a major sporting event.

As professional sports try to offset the current trend of an aging fan base, they need to look at ways they can benefit their younger audiences. Keeping these younger consumers engaged means improving the fan experience at venues, at home, or on the move.

The potential increase in smartphone costs (41%) is by far the most-cited concern about 5G among 5G-aware consumers in the UK and U.S., particularly for females (45%), Gen Z (46%) and late majority adopters (46%).

This comes ahead of concerns about privacy, potential radiation, and becoming overly attached to devices.

But where do these concerns stem from?

The pricing of flagship phones is far from stagnant, having steadily increased for a number of years.

This has contributed to “sticker shock”, which describes the surprise felt when the actual cost of a mobile becomes known to a potential buyer – this can be glossed over by broken-down figures such as monthly fees.

But even before we account for the possibility of consumers being misled, it’s clear phone prices have skyrocketed. In 2016, for example, Samsung charged $670 for a brand new Galaxy 7, whereas this year’s Galaxy S10 starts at $900.

After relatively flat sales in 2019, Samsung hopes that selling more expensive phones in 2020 will give the brand a much sought-after boost. Indeed, with far more consumers owning smartphones today, and owning them for longer periods of time, it’s now harder than ever to convince masses of people to upgrade.

5G development is by no means cheap, either. In their 2025 capex forecasts, GSMA Intelligence predict operators will spend over $1.3 trillion over the next seven years – with the bulk of that allocated to 5G.

Because it’s unlikely that there’ll be a single app for 5G, operators will have to adopt an individual approach to secure their own revenue generation.

5G networks will have to be built in a modular way, to offer customized and scalable services, which will inevitably increase costs.

On top of this, a report from Oxford Economics (commissioned by Huawei) predicts that barring vendors from the market and controlling the rate of 5G adoption could cost countries 8-29% more for 5G over the next decade.

The report also concludes that the increase in investment costs would also lead to delays in the network rollout, meaning that millions fewer people still won’t have benefited from 5G coverage by 2023.

The future is uncertain

While tensions between Huawei and the U.S. persist, the EU has decided not to ban the Chinese telecom giant from operating in Europe.

That said, the EU is struggling to find a middle ground between Huawei’s huge dominance in the 5G sector and the company’s associated security concerns put forward by the state of Washington.

There are also financial concerns in the case that Huawei were to be banned altogether: limiting the use of Huawei devices from BT’s EE 5G mobile and full-fibre broadband networks will cost the Britishtelecoms group $650 million over the next five years, for example.

Meanwhile, the U.S. still perceives Huawei as a potential threat to cybersecurity and fears it would facilitate cyber espionage by the Chinese government. This is likely why 14% of 5G-aware consumers in the UK think Huawei is the leader in the 5G race, compared to only 6% in the U.S.

It’s also important to remember that technology is gaining traction beyond China and the U.S., as Europe hurries to compete in the 5G race as well.

With Vodafone Germany and Deutsche Telekom Germany having launched 5G services in several cities in 2019, we’re about to see less talk and more action in the West. 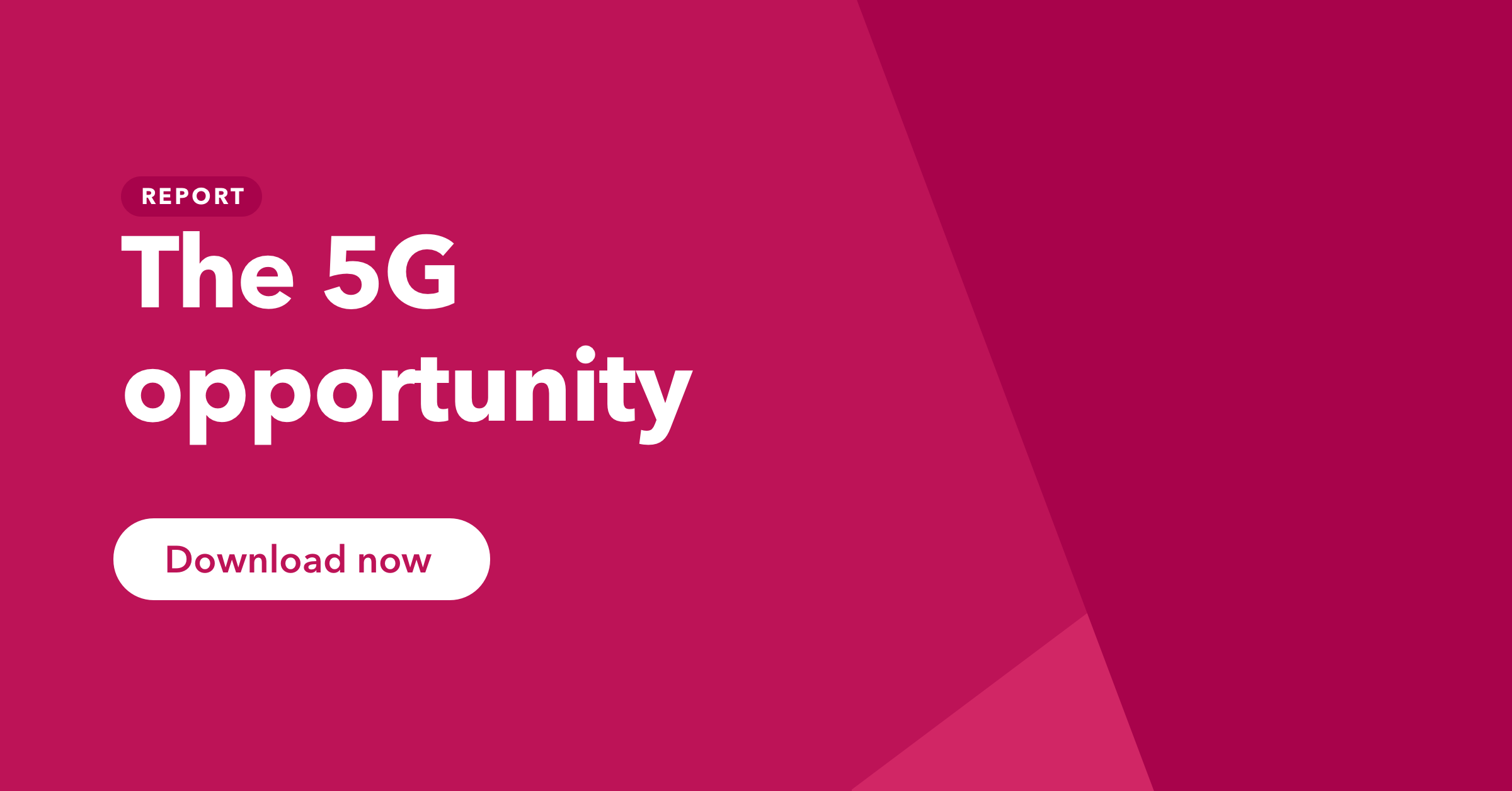