The pandemic changed boomers’ relationship with tech. Here’s how.

It’s a long-standing misconception that baby boomers have a difficult relationship with tech, but it’s more likely that this stems from the simple fact they’re generally less interested in it – rather than outright technophobia.

While they’ve shown less of a reliance on technology in the past, the ramifications of the pandemic have caused a shift in tone, offering brands (particularly those in the tech and social media sector) new ways of reaching them.

Using data from our Core data set, we set out to answer the following questions:

Boomers are expanding their device portfolios.

Boomers have a very different relationship with technology than their younger counterparts; being the generation least likely to say they buy new technology products as soon as they’re available, or feel confident in using it.

There are some important caveats to make note of here.

The past year has seen boomers rely on tech more than they have in the past, and it’s given them a confidence boost in the process.

As of Q1 2021, our GWI USA dataset shows that 36% of baby boomers say they feel confident in using new technology – a 10% increase on Q2 last year.

They also have considerable spending power, meaning boomers’ general disinterest in purchasing new tech isn’t because they can’t afford it.

As such, by the time the pandemic rolled around, boomers had a chance to catch up, and that’s exactly what happened.

After equalling PC/laptop ownership in 2015, smartphones cemented themselves as the most popular device worldwide – with the exception of baby boomers. For them, this tipping point came nearly three years later.

While boomers are now more or less on par with other generations for smartphone ownership, Q2 2020 saw them pass another significant milestone; the first time they considered mobiles more important than PC/laptops.

The reasons for this can be almost exclusively attributed to the pandemic – boomers fall into what’s typically considered a high-risk age group for COVID-19, and are therefore more likely to be spending time at home.

Throughout the pandemic, our bespoke coronavirus research revealed baby boomers were spending more time doing things like: watching television/streaming services, listening to music, and playing video games – the latter of which made boomers one of gaming’s fastest-growing demographics.

This newfound enthusiasm for digital entertainment, coupled with a need for socializing via video-conferencing tools quickly translated into a need for more accommodating devices, explaining the distinct growth in smartphone ownership, but also smart TVs, and streaming sticks too.

Though our research, at the time, signalled boomers expected these changes would stick around for the foreseeable future, we’re now seeing proof of permanent change.

Entertainment isn’t the only factor to be aware of, however.

Health-consciousness and exercise behaviors grew early on in the pandemic and boomers were no exception, with the percentage doing any kind of exercise, most days a week, growing 6% between 2019 and Q2 2020.

This gave certain smart products (like wristbands/watches) some real staying power – even with boomers, who until this point had rarely been considered a target audience for these products.

Boomers are more convinced of a need for tech, but need persuasion in trusting it.

While the pandemic offered a chance to discover tech, boomers’ attitudes haven’t changed much in the past year. Still weary of how tech will affect their private lives, trust is a clear issue.

48% of boomers say they worry about how companies use their personal data, or how their government tracks them online.

As a result, they’re the least likely to feel comfortable with apps tracking their activity, and feel the least confident in their ability to control their data online.

Younger baby boomers (those aged 58-60) show slightly less concern, but it’s worth noting that age doesn’t necessarily contribute to higher/lower concern with tech; these are behaviors exhibited by all generations.

Even the most tech-savvy – Gen Zs and millennials – have their doubts about controlling their personal data (just 27% say they feel in control), a figure that’s remained consistent since Q2 2020.

A positive takeaway here, however, is that boomers’ concerns have led them to take more action to protect themselves online.

Over half of them regularly clear their browsing history or decline cookies online, while 1 in 5 use an ad-blocker just as often – signaling a level of tech-savviness that boomer stereotypes often ignore.

Brands need to nail an honest approach in their messaging.

While authenticity and reliability are mainstay brand qualities among all internet users, they’re absolutely vital to baby boomers.

Given a lack of historical enthusiasm for devices and tech, brands in these sectors should consider each of them a high priority in their messaging.

One positive side-effect of the past year is how boomers have become more accustomed to shopping or browsing for products online.

55% of boomers say they shop or browse for items online weekly.

While it’s not their ideal experience, it’s the perfect opportunity for sites to streamline their purchasing process for these new consumers.

Skepticism of how their data is handled, however, could hamper their decision to purchase from such sites or trust technology entirely.

Despite demonstrating a willingness to protect themselves online where possible, boomers remain wary of how governments or companies handle their data – meaning the onus for such groups to safeguard this information properly is more important than ever.

Big tech is quickly turning its attention to this, making privacy and online safety policies a selling point – these themes are now a mainstay of Apple’s advertising campaigns, for example, and have prompted Google to follow suit.

By demonstrating clear information about all aspects of a product, communicated in a way that still emphasizes customer satisfaction, brands won’t just come across as transparent to baby boomers – they’ll promote positive attitudes toward tech in general.

As a generation that’s been stereotyped as technophobic for some time, the pandemic has proven a turning point; boomers are adapting to new technologies, devices, and ways of doing things online in a shorter space of time than they ever have previously.

While they’re not as connected to tech as their younger counterparts, it’s important to take note of how quickly they’re catching up.

At the same time, they still have a way to go before trusting tech completely, and brands have a role in changing this.

Simple things like: explaining how boomers can protect themselves online, or how their data is collected and used will help reduce the risk of mistrust in both technology and the brands involved – particularly as the pressure builds on adtech. 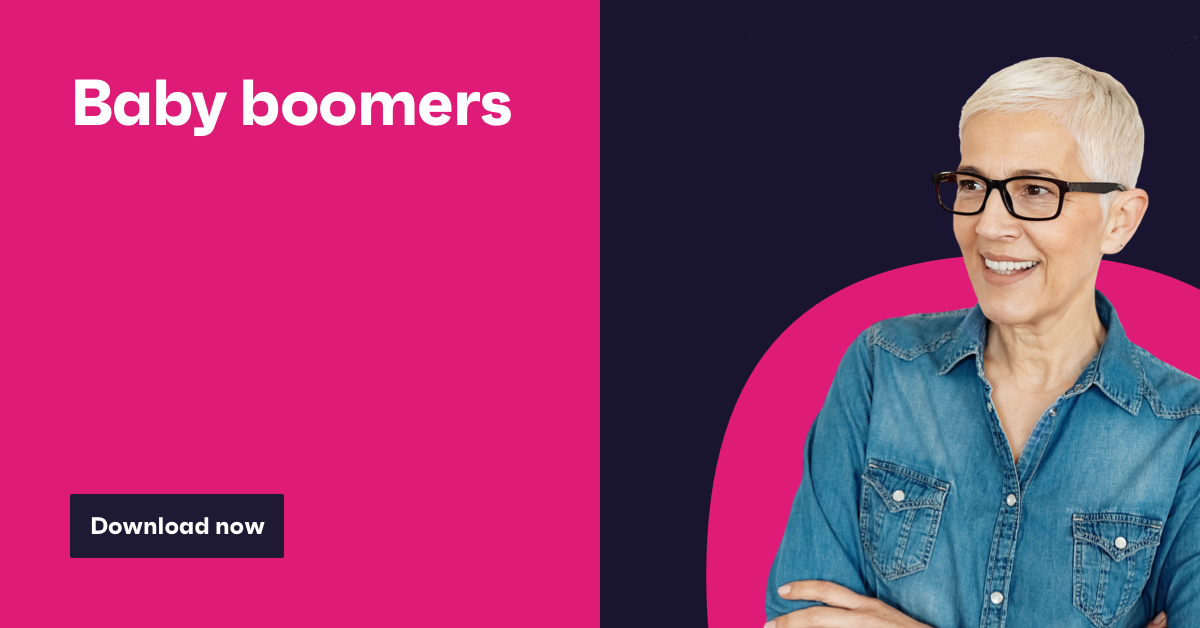