How to Decrypt the Cryptocurrency Consumer

On October 31st, 2008, the pseudonymous Satoshi Nakamoto published the paper Bitcoin: A Peer-to-Peer Electronic Cash System, which would lay the groundwork for the world’s most talked about and prominent novel currency project since the creation of the euro some twenty years ago.

Growing from a little-known cryptography mailing list, a discreetly registered domain, and a dedicated forum set up by its founder, Bitcoin soon inspired a huge growth. This was evident in traders, platform and brokers, trade media, fans churning out memes, as well as commercial endeavors from cash brokers to exchanges, pubs to candy stores.

This rapid expansion also meant that the user and consumer base has been difficult to track and segment.

By including cryptocurrency in our global survey of digital consumers, we’ve been able to catch almost 90,000 relevant respondents without specifically targeting them. This, combined with our targeted poll, gives a unique overview of this audience.

5.4% of the global internet population own cryptocurrency.

Of them, roughly a quarter said they have no other investments outside their pensions or cash savings, while the remainder combine cryptocurrency with stocks and bonds, precious metals, and other assets.

Just 1 in 5 cryptocurrency owners held it as their primary investment and there are limited differences in opinion between people who own more or less crypto. This implies that cryptocurrency audiences are more defined by their willingness than their ability to invest.

Surveys and censuses going back at least five years point to a user base with a massive overrepresentation of men, and especially younger men, with a set of specific attitudinal characteristics: risk tolerance, libertarian politics, and business interests.

The changing face of crypto.

The first community surveys that were published, such as the self-selected community census, often showed gender ratios of upwards of 93-7 male-to-female.

This has also been identified as a key challenge for crypto. Being able to grow outside this limited audience is key to achieving what many holders see as the future of crypto: becoming a mainstream means of payment, which 75-85% of crypto holders in the U.S. and UK think will happen.

Five years on, we’re seeing a mixed picture. The gender split is more 70-30 than 80-20, with massive differences between countries.

Looking at markets where we have more than 100 cryptocurrency-holding respondents, the overrepresentation of men varies from 54% in China to 88% in Germany. 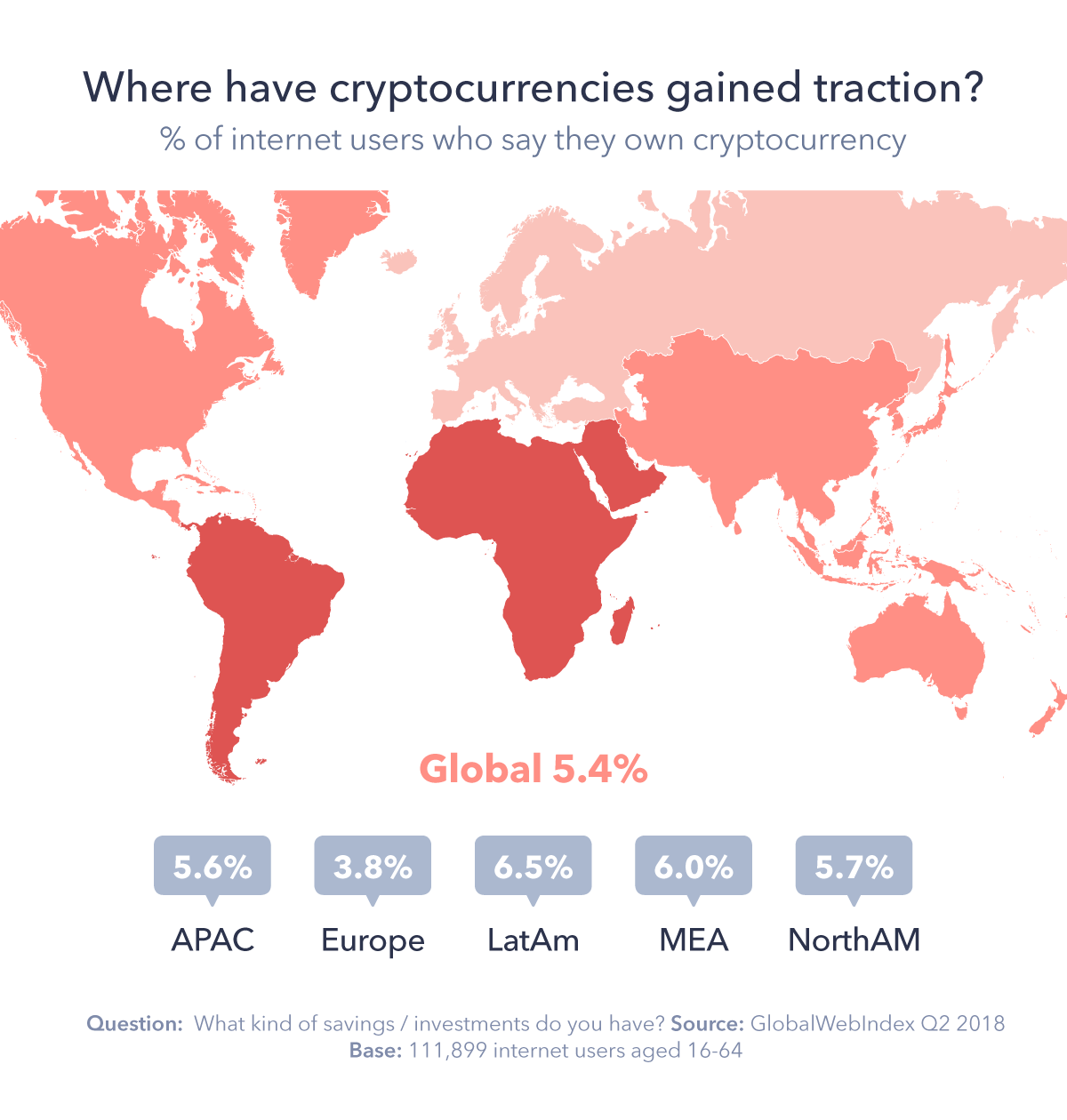 Europe and North America looks much the same, and are where we’ve got the largest concentrations of crypto users. Outside Western markets, the ratio drops to 60-70% male.

The largest crypto user base in absolute terms, Mainland China, is just 54% male.

There could very well be more Chinese women who own cryptocurrency than there are male holders in the United States, even if traders and brokers are mainly male. But this is also true for mainstream investors.

Though holders have an upward socioeconomic skew, the clear majority of people, even in higher social strata, don’t hold crypto.

What sets cryptocurrency holders apart is attitudes, not assets.

The cryptocurrency community has always had an undercurrent of pessimism toward the world of finance and government. After all, the first batch of cryptocurrency transactions ever made were stamped – in perpetuity – with a reference to the global financial crisis: “Chancellor on brink of second bailout for banks.” 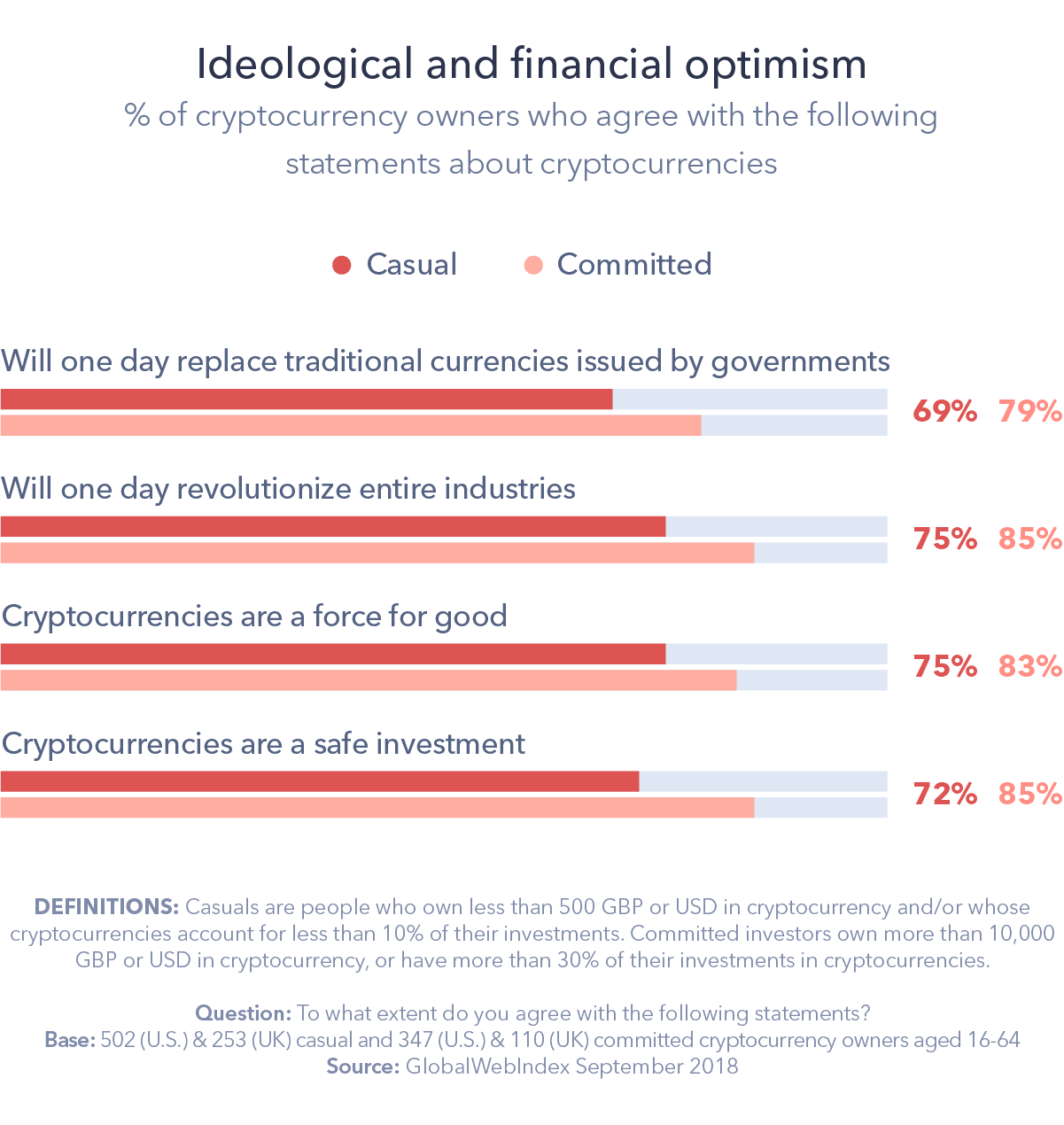 Ten years on, this no longer reflects the majority view of cryptocurrency holders, if it ever did.

Cryptocurrency holders are more positive about the world economy than the average internet user, and the average investor. A currency that seems to offer a safe haven out of the hands of unpopular and distrusted institutions had a strong appeal for people with pessimistic, or even contrarian, views of the economy.

Across the board, that gloom seems to have dissipated.

58% of cryptocurrency holders now say they feel optimistic about the world economy, compared to 43% of non-holders or investors and 52% of those who have some investments beyond their pension or cash savings, but no crypto.

The outspoken economic optimism, both personal and global, among cryptocurrency holders is a powerful differentiator, and helps explain why some people are attracted to high-risk investments.

Even if they don’t hold cryptocurrency, economic optimists’ confidence in the global economy matches their optimism about their own finances – and their ability to manage them.

68% of optimistic crypto holders say they like to stand out from a crowd, 72% describe themselves as risk takers, and a full 87% say they always strive to achieve more in life. They see themselves as adventurous, make decisions based on their gut, and are willing to buy a product “simply for the experience of being part of the community built around it.”

Cryptocurrency holders are extremely engaged online, over-indexing for every online activity from online dating to social media, and their habits reflect their unique mindset.

As risk tolerant, ambitious consumers with a strong sense of personal agency, they’re much more likely to have visited online gambling sites – 42% did in the past month, compared to 24% of all internet users.

They’re also a relatively young audience, so it should be no surprise that YouTube is their most popular social network/content space: 93% of cryptocurrency users (not including China). While video tutorials are their most distinctive interest, tech-oriented, male-heavy sites like Twitch and Reddit are also popular.

While cryptocurrency holders are more privacy-conscious than the average online user, this is in no way unique to this audience.

59% say they prefer to remain anonymous online, but so do 53% of global internet users.

However, there’s a relatively pronounced group of crypto holders – especially the quarter who strongly prefer to be anonymous – who take active measures to safeguard their privacy.

Compared to the general online population, twice as many crypto holders use a VPN at least once a month, though they remain a minority at 42%.

They’re also much more likely to state that the purpose is to hide their web browsing activities from their government, at 2.4 times the rate. But it’s important not to dramatize: the most common reason crypto holders use VPNs is to access entertainment content.

Holding out for the future.

Here, we have a group of investors who are eager to take on risks and move up in life. They’re investing in an outwardly speculative endeavor, while emphasizing the safety and predictability of their most characteristic investment.

Long-term investment is by far the most widespread motivation to hold cryptocurrencies among our U.S. and UK respondents. There’s no one reason to do so, though, and there are more hobbyists and ideological investors than actual day-to-day users.

As usage is low, but 68% expect the value of cryptocurrencies to increase next year, we can confirm that crypto owners are holding out for the future.

While this is more common with those who own larger amounts or have larger shares of their wealth tied up in crypto, even 40%of respondents in the UK and U.S. who don’t own any crypto expect it to grow in value.

Cryptocurrency has sat on the edge of a mainstream breakthrough for some time, which can be attributed to questions around the safety of the currency and uncertainty around the market itself. However, this is what appeals to the risk-willing and business-minded audience.

Any marketer looking to target this audience would do well to tap into its well-documented sense of daring and optimism, rather than rely on more traditional messages around security.