Why E-Commerce Should Take Bitcoin Seriously

Bitcoin may be in its early stages of development, but it has certainly led to a lot of hype. Enthusiasts have pointed to its potentially revolutionary use cases, skeptics have questioned its association with illicit online transactions, and financial institutions as well as governments have tried to work out if and how they can use the digital currency to their advantage.

These mixed reactions aside, what many are asking is whether the cryptocurrency can move beyond being an investment for those with disposable income, and be commercialized and accepted as a common payment option in retail. In short, is bitcoin something which the e-commerce industry should be taking seriously?

There is certainly consumer interest. Globally, just over 1 in 4 internet users are interested in using bitcoin in the future. Demographics have a big impact here, with the 16-44 age group expressing the most interest, and figures then dropping off sharply among the 45-64 age group. By income, it’s the top earners who are most enthusiastic, on just over 3 in 10. There’s also the privacy factor: with 55% preferring to be anonymous online, it’s no wonder that we see such a spike in interest from VPN users as well as from online gamblers.

Despite this interest, it’s no secret that bitcoin has much ground to cover before taking off in the retail sector. Yet there is good reason to be hopeful of the currency’s future as a mainstream payment option when buying online. Some notable brands have already adopted bitcoin as a payment option, with gaming platform Steam, blogging platform WordPress.com, and even Microsoft’s Windows and Xbox Marketplace (not to mention various online gambling sites) being among them. But it’s the lower transaction fees when using bitcoin for small purchases of digital content which have made using the cryptocurrency an attractive prospect in this industry. And although the items available for purchase here aren’t physical goods but primarily digital content, it is 1 in 2 internet users who bought some form of digital content last month (rising to 7 in 10 of those interested in bitcoin), so there’s clearly a substantial market for bitcoin to move into.

But there are other growth areas where bitcoin could potentially have a real impact. Some of the most telling figures from GWI’s global research come from our regional breakdown of interest in bitcoin. Despite the list of businesses accepting bitcoin predominantly emanating from western economies, our data shows that the bulk of consumer interest in the digital currency stems from the mainly fast-growth regions of APAC, LatAm and the Middle East and Africa. The benefits of bitcoin’s decentralized blockchain technology to these regions – where access to financial services remains an issue for many – are potentially substantial. Over 40% of online adults in nations like India, the Philippines and Indonesia – markets where many are left underbanked – are interested in using bitcoin in the future, markets where online commerce is beginning to seriously take off and internet penetration rates are on the rise.

But what really underpins the prospect of this digital currency going mainstream is consumer understanding – retailers won’t include it as a payment option if most people have little idea of what it is and therefore demand remains low. After all, it’s still 3 in 4 who remain uninterested or unaware of bitcoin. The complex nature of the cryptocurrency has so far meant that it has largely been left to young and tech-savvy audiences. But the opportunities it presents to businesses looking to crack these underbanked populations as smartphone adoption continues to climb and internet penetration rates rise are difficult to ignore. This will likely drive this interest and force more companies to pay attention to these opportunities. 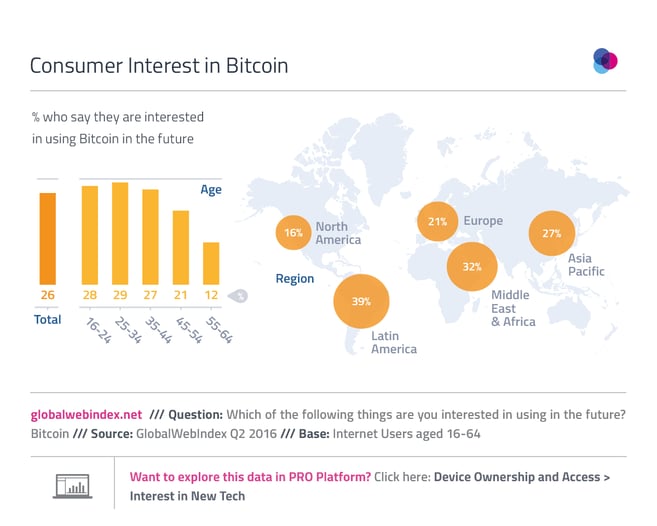