WeChat Payments: One to Watch

Once upon a time, mobile messaging services like WhatsApp, BBM and Tango were simple communication tools where we did little more than exchange messages. During the last year in particular, though, it’s become strikingly apparent that almost all of them have ambitions that stretch far beyond this; from the arrival of Stories on Snapchat to Facebook Messenger becoming a standalone platform in its own right, we’ve been seeing chat apps undergo an evolution – one that will ultimately bring them into more direct forms of competition with “traditional” social networks like Facebook and Twitter.

Outside of Asia, though, most mobile messaging services have been playing catch-up here. On China’s WeChat or Japan’s LINE, for example, users have long been able to undertake a far wider range of activities than their counterparts in other regions. As we’ve debated the merits of Snapcash and Facebook’s peer-to-peer transfer service, the simple truth is that WeChatters have been able to send money through the app for some time.

To date, WeChat has limited this service to its users in China; now, for the first time, we’ve seen WeChat extending the functionality to a new market – inviting users in Hong Kong to donate money via the app in order to support UNICEF’s post-earthquake relief efforts in Nepal. While that can only be a good thing which all of us would want to commend, I want to concentrate here on what it means for the mobile messaging landscape and for WeChat’s presence on the global stage.

Currently, WeChat is the dominant messaging app in China. But it’s also been building substantial – and rising – audiences in other parts of APAC, with places like India, Malaysia, Singapore and Indonesia quickly becoming key markets. That’s important if – as seems likely – the arrival of WeChat’s Payment system in Hong Kong is a sign of things to come in other markets too. It’s certainly pretty important that, according to GlobalWebIndex’s data, about a fifth of WeChat users in places like China and Hong Kong have recently donated money via their mobile, but as many as a third or more in India and Indonesia have done likewise. 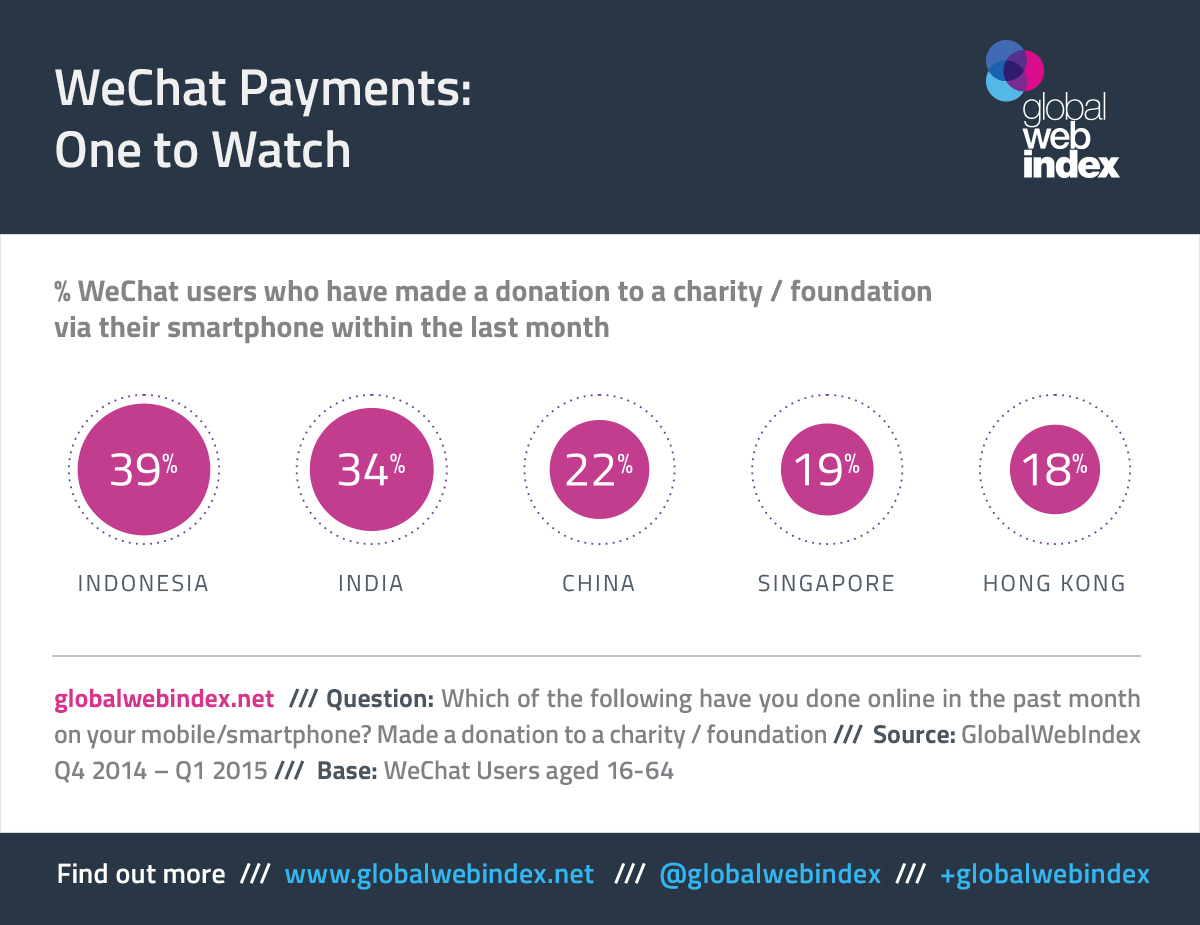 Across much of the Asian continent, then, WeChat is well-positioned to push the idea of mobile app payments into the mainstream – stealing a lead on rival services and helping it to become ever more integrated inside the daily lives of its users.

As I’ve said before, 2015 is a pretty fascinating year in terms of mobile messaging tools. Despite WhatsApp and Facebook Messenger grabbing headlines, the simple truth is that no single chat app has yet achieved the type of dominance that Facebook managed in the world of social networking; just look at the popularity of WeChat in China, Kakao Talk in South Korea, BBM in Indonesia, LINE in Japan or Snapchat among western teens and it’s clear that there are multiple players in the mix – all of whom are attempting to become the messaging app par excellence. Becoming the default choice for mobile payments is hugely important to this, and that’s why the international arrival of WeChat Payments is a pretty key development.