For some time now, Netflix has been the biggest name in the OTT content space. But its latest move, launching in almost every country around the world (an initiative we predicted last year), shows the service’s desire to become the default name in the online video business.Just as Google has become a synonym for search engine, ‘Netflixing’ is well on the way to becoming the byword for watching TV or film online.

Already, Netflix has seen some stunning success in certain countries. In its home market of the USA, about half of online adults say they are watching Netflix. The service is posting impressive figures elsewhere, too – 4 in 10 watch in Mexico, as do close to a third in Canada and Ireland.

Replicating this success in its new markets will not be assured for Netflix, however. In particular, local OTT services will provide a significant challenge, offering culturally relevant content in native languages which can seriously challenge the efforts of global competitors. But as online TV becomes an ever more important part of consumers’ entertainment portfolio, Netflix can hope to become a part of these viewers’ entertainment package by offering a broad library of international content to complement the locally-produced (and often free) content of other OTT providers. In this mission, Netflix’s global expansion now leaves Amazon Video, which is available in only a handful of countries, looking unambitious at best.

Another important factor here is Netflix’s fractured relationship with VPN users. To date, GWI’s research shows that Netflix has had a large user base outside of its official markets. Many tech-savvy consumers turn to VPNs to bypass the geo-restrictions that media providers place on their content and, among the 1 in 4 online adults who say they use VPNs, accessing better entertainment content is the most popular reason. In the past, Netflix has been forced by rights-holders to crack down on VPN users, but GlobalWebIndex’s research shows that there are as many as 23m VPN users watching Netflix each month from countries where it has yet to officially launch (worth noting here is that account sharing is widespread, so user numbers will always be much higher than the number of paying members).

Some Netflixers may still utlise VPNs to access the wider content library available on the US version of the platform but by entering these new markets, Netflix has done much to rid itself of a major legal headache. And with VPN users being more likely than the average online adult to pay for content, such figures also demonstrate the potential of Netflix’s imminent global expansion. These VPN users represent only the most enthusiastic Netflix fans. By opening up the service – officially and easily – to internet users across the globe, Netflix can hope to gather an even larger user base in its new markets. 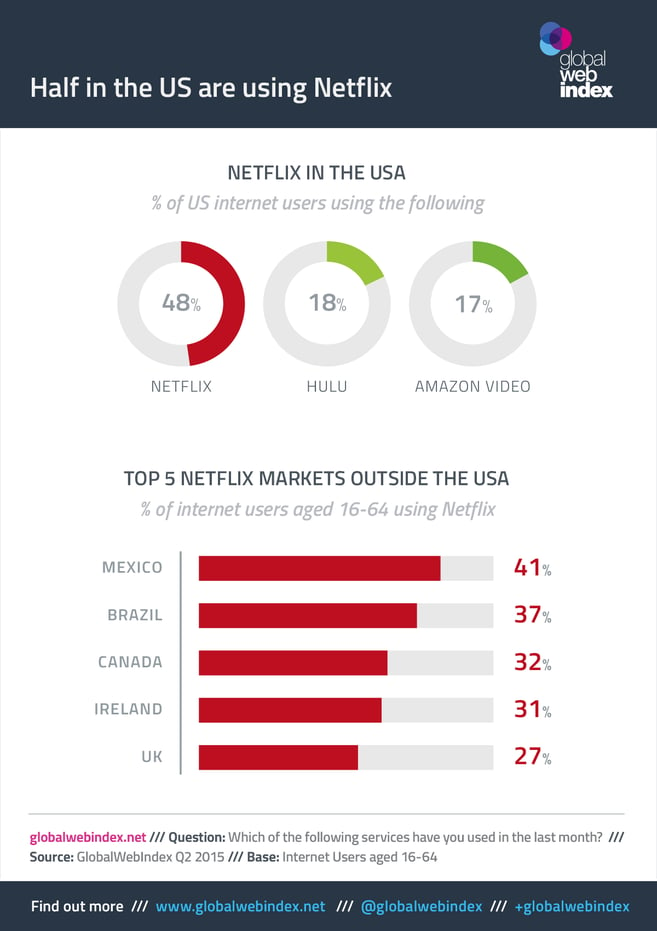