Half of internet users watch the Olympics

With the Rio 2016 Olympics fast approaching, today’s Chart illustrates the vast global popularity of this competition and how it can help marketers reach a broad selection of digital consumers.

Already, half the world’s online population say they watch the Summer Olympics on TV or online – a figure we can expect to increase during the period of the competition itself. That also means the Olympics is the most popular global sporting competition/league among the 30 tracked by GWI. What’s more, a glance at the regional figures shows that (unlike many other competitions) the Olympics maintains its appeal across the world.

As yet, it’s TV which is the clear choice for Olympics viewers (80% watch via TV). That’s good news given that this audience cites TV ads as the place where they are most likely to discover new products or brands.

However, with 85% saying they use additional internet-connected devices while watching TV, there is also a strong opportunity to engage these viewers via the second-screen – especially as 1 in 4 say they are shopping online while watching TV.

To find out more about Olympics viewing trends and the digital habits of Olympics viewers, watch out for our upcoming Olympics Fans report. 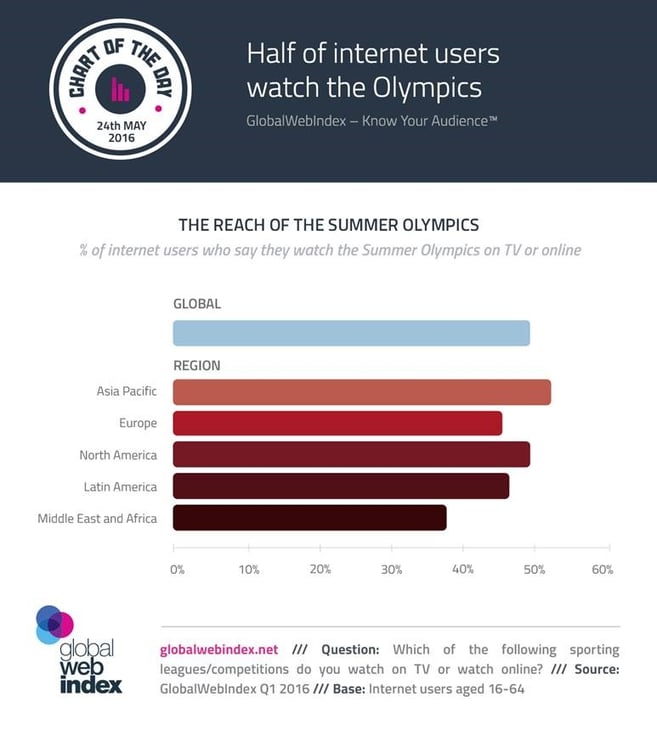