When Facebook announced its latest results last week, the continued success of Instagram was one of the (many) highlights.As our data shows, membership rates in key markets such as the UK and USA continue to tick upwards and are especially strong among 16-24s – well over half of whom have a presence on the photo-sharing network.

Unsurprisingly, the rise of Instagram is having an impact on how people use Facebook itself. In particular, while Facebook’s membership and visitor numbers show no signs of waning, our data suggests that people are doing fewer things on the site than they once were – with certain behaviors having migrated to other services.

Instagram is a major beneficiary of this trend, capturing a lot of the photo-sharing that might once have taken place on Facebook itself. And that comes through very clearly when you look at what Instagrammers say about their Facebook usage. While about 4 in 10 active Facebook users in the UK and USA say they are using the site less than they once were, that rises to 50% among Instagrammers and an even more sizable 62% among Instagram’s 16-24 year-old users.

This trend brings much good news for Facebook, though. After all, these users are still visiting Facebook but are now actively engaging with Instagram too – giving two separate places where they can be served ads and therefore monetized.

In a sense, it doesn’t really matter if people do fewer things on Facebook. As long as they still visit the site – which they are in their droves – the company’s profits will continue to soar. 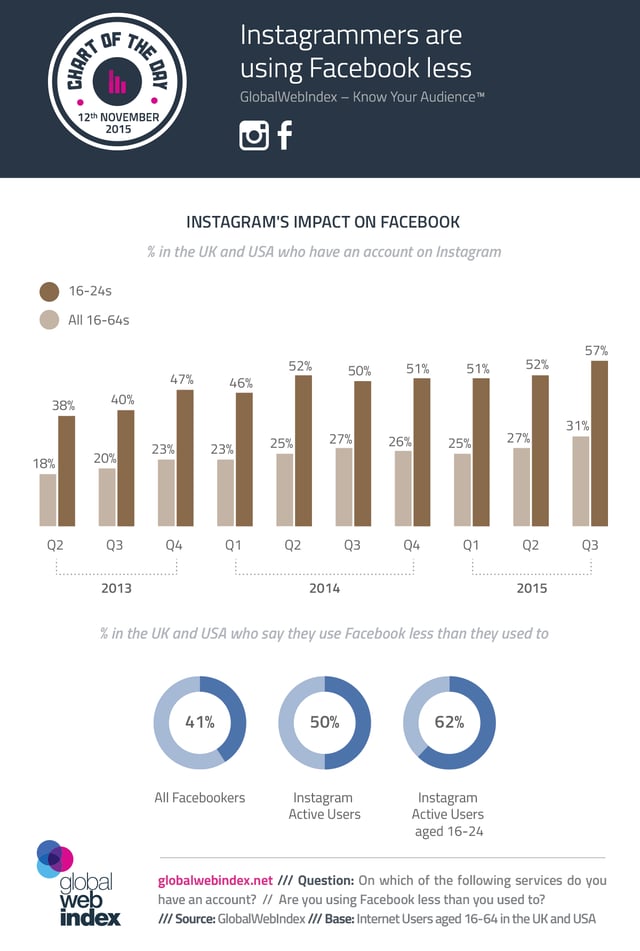