Internet users in the US watch the most TV each day

Continuing our look at media consumption behaviors, today we examine how much time internet users in GWI’s 32 markets are devoting to TV each day.

As our chart illustrates, there are profound differences to be seen here – with total daily time spent on TV ranging from a low of 2.2 hours in China to a high of 4.33 in the USA. Generally speaking, TV viewing levels are lowest in APAC and highest in the Americas.

So too are there strong variations in the relationship between online and traditional forms of television. In China, for example, online TV (1.03 hours) has almost caught up with traditional TV (1.17). By contrast, traditional TV viewing in the US is still the clearly favored option (3.4 hours vs just 0.92 for online).

Traditional television also performs relatively strongly in Japan, South Africa, Ireland, France and the UK – indicating that online TV has typically been embraced most enthusiastically by consumers in fast-growth markets.

For further detail and analysis on this topic – as well as figures across age groups and over time – check out our Digital vs Traditional Media Consumption report (a free summary of which can be downloaded here). 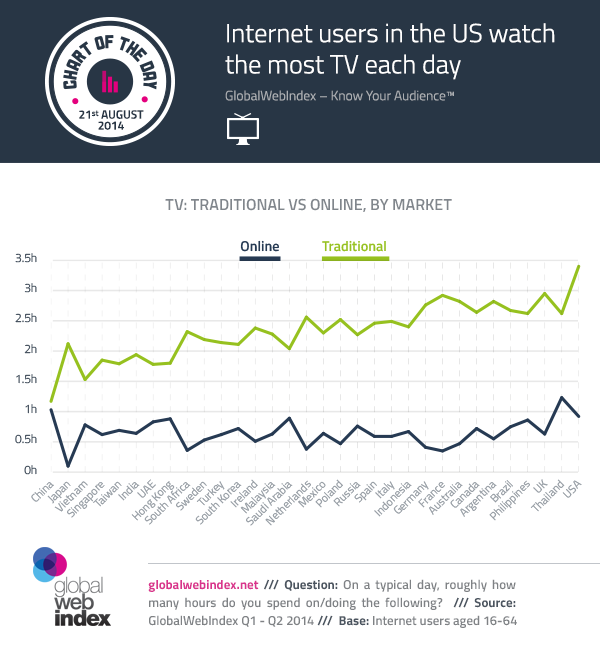