Match-by-Match Engagement with the World Cup: Up in the USA, Down in the UK

Using more data from our Real-Time World Cup Research, today we look at how match-by-match viewing behaviors changed as England and the USMNT progressed through the tournament.

If we track engagement in each country up until the point that their national teams were knocked out of the competition, it’s clear that English and US fans were behaving very differently.

In the case of England, interest was highest for the first match against Italy; 82% of the internet users aged 16-64 saw or listened to the game in some form. But as the team’s fortunes declined, engagement figures followed suit: the numbers tuning in for the subsequent matches against Uruguay and Costa Rica dropped to 79.5% and then 74% respectively. It was the live TV audience that suffered the most from this; while very small minorities shifted to on-demand or live radio, most simply stopped watching the England games altogether.

In the US, we saw quite different trends in action. Over 55% of the online population watched or listened to USMNT’s first game in some form. Buoyed by a positive performance, strong interest from the media and encouragement from Head Coach Jürgen Klinsmann, engagement rates for the following two matches rose to 63.5% (vs Portugal) and then a high of 67% (vs Germany) – with audiences increasing for both live TV broadcasts as well as streaming services.

Despite the figures dipping to 60.5% for the final Belgium game, it’s clear that soccer has now graduated to mainstream status in the US – with other results from GWI’s Real-Time World Cup Research also showing that the American audience was particularly enthusiastic about posting World Cup-related comments on social networks. 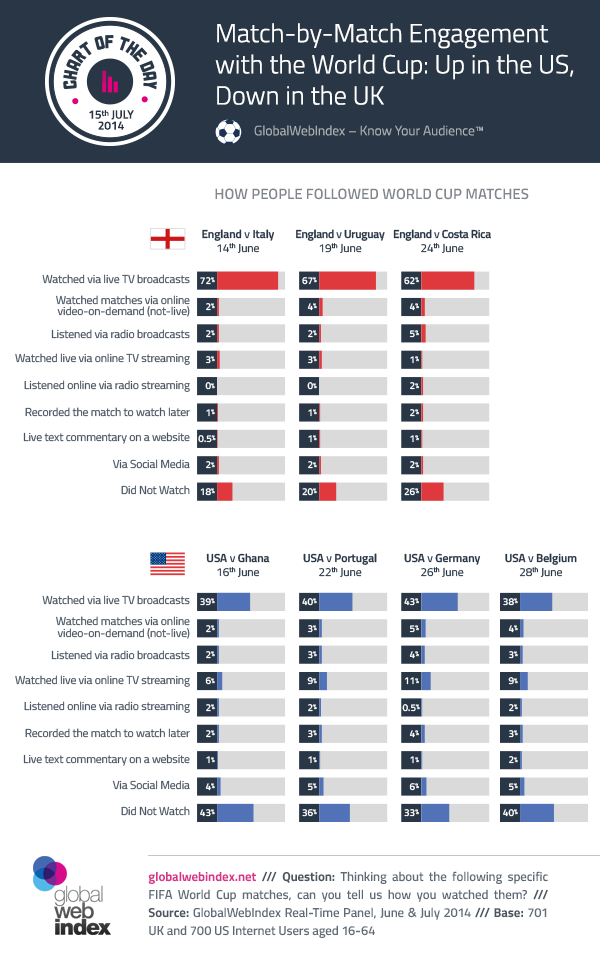 For more match-by-match viewing figures from the tournament, as well as analysis of social networking behaviors and sponsor recognition levels, look out for our three World Cup trends released this week.