Profiling Viber on its 5th Birthday

To mark its fifth birthday, our midweek Chart of the Day takes a look at the top countries for instant messaging app Viber.

Outside of China, 8% of online adults used the service last month. That places it alongside names such as LINE and Snapchat, although it’s worth noting that its reach increases significantly in some markets to hit 1 in 4 online adults in Ireland and 3 in 10 in Vietnam and the Philippines.

From a regional perspective, Viber’s strength lies in APAC, with the huge (and ever-increasing) size of India’s online population making it a particularly important market for the service. In contrast, North America remains a frustration: despite recent attempts to push into the US, just 3% there are monthly users.

As with other challengers in this space, the key test for Viber is whether it can begin to establish the type of global coverage enjoyed by Facebook’s two services, Messenger and WhatsApp. Currently, LINE, WeChat, Viber and Snapchat can all boast some very strong markets, regions or demographics, but none of them has the type of cross-region or cross-demographic appeal of Facebook’s messaging apps. 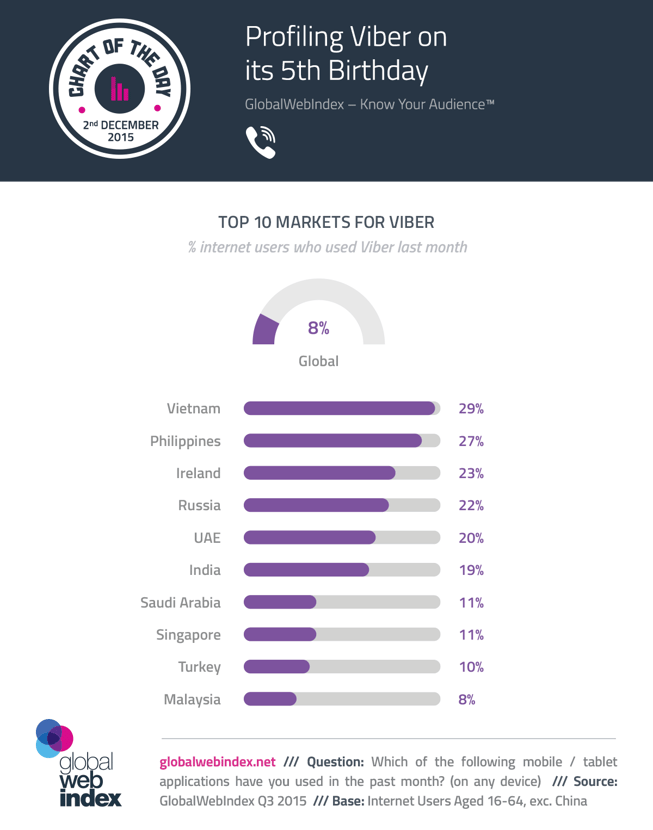