A lot of things have been said about this World Cup. It’s the most digital tournament to date. It’s the first truly social one. It’s the World Cup where second-screening has really come into its own.

All this is true, but results from GWI’s real-time panel show one – arguably slightly less expected – development: this is the first World Cup to have made a serious impact in the US.

Soccer is no longer the niche sport it used to be in America. The World Cup has captured the US audience like never before, with reports showing that the Ghana and Portugal matches commanded television audiences of 16 million and 24.7 million Americans respectively.

Buoyed by good performances in these two games, still more are expected to tune into tonight’s clash against Germany. Indeed, GWI’s research – conducted on day 1 of the tournament in the US – showed that 70% of online Americans aged 16-64 who were planning to watch the World Cup would be doing so via live TV broadcasts. That’s a potential audience of 27 million people.

So, what are these fans likely to be doing as they tune in?

GWI Research shows that just over half (51%) of American viewers will be turning to social networks to see what other people saying about the match. That’s a higher percentage than in the UK (44%). And it’s on a par with what’s happening in host-nation Brazil (50%).

But US fans won’t just be looking – they’ll be commenting too. Exactly a third say they’ll post comments about the game on social platforms – with Facebook by far the most popular destination. An impressive 95% of networkers say they’ll use Facebook, with Twitter also performing well (65%). Smaller minorities of the social audience will be engaging via Instagram or Google+ (just over a quarter each).

In terms of conversation drivers, it’s the final result which is the favorite talking point (76%). But in-game events such as a goal (70%), particular tackles (23%) and yellow/red cards (15%) all have the power to create an online buzz too.

With the American population now truly engaged with the tournament – as well as a huge audience in China, despite the country failing to qualify – calling this the World Cup seems more apt than ever before.

Want more insights on how people are engaging with the World Cup – from how, where and with whom people are watching to how many people recognize the official sponsors? Download our free World Cup behaviors report here as well as our free profile of fans here. 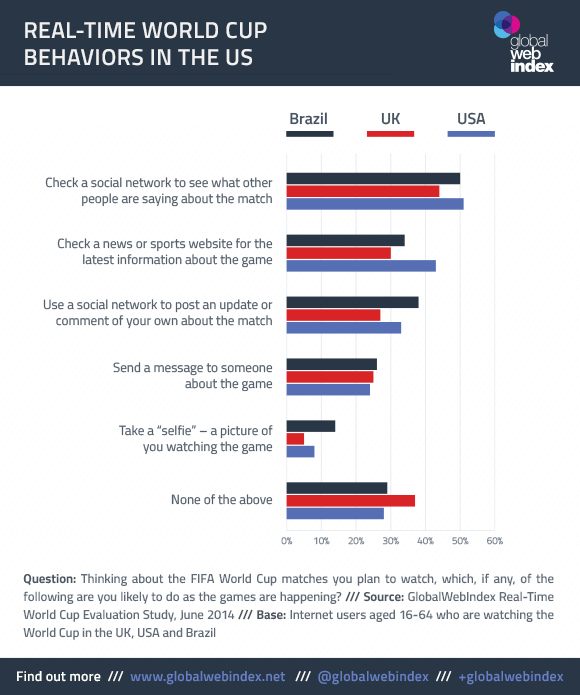