In The Missing Billion – our new White Paper available to download for free here – we explore a number of trends which are causing internet populations in fast-growth markets to be under-represented or overlooked entirely in passive web analytics.

One of the biggest contributors to this problem is the use of Virtual Private Networks (VPNs) and Proxy Servers – tools which allow people to connect to the internet via a remotely located server. People are doing this to stay anonymous, to access restricted social networks or new websites and – as we say in yesterday’s chart – to bypass geo-restrictions on some of the world’s biggest content sites like Netflix.

Across all of the motivations we track, though, there’s one pattern which remains consistent: digital consumers in fast-growth markets are much more likely to deploy VPNs than their counterparts in mature nations. If we look at those who are in search of better entertainment content, for example, fast-growth markets account for all of the top 10 countries – led by Thailand and Indonesia, where a quarter and a fifth of internet users respectively are doing this. Compare that to places like Germany, the US, the UK and Australia, where the equivalent figure is around 5%, and the differences here are pretty clear to see.

For audience measurement, this is a trend that causes major problems: large numbers of VPN users will be incorrectly allocated to countries like the US, where the servers in question tend to be located. 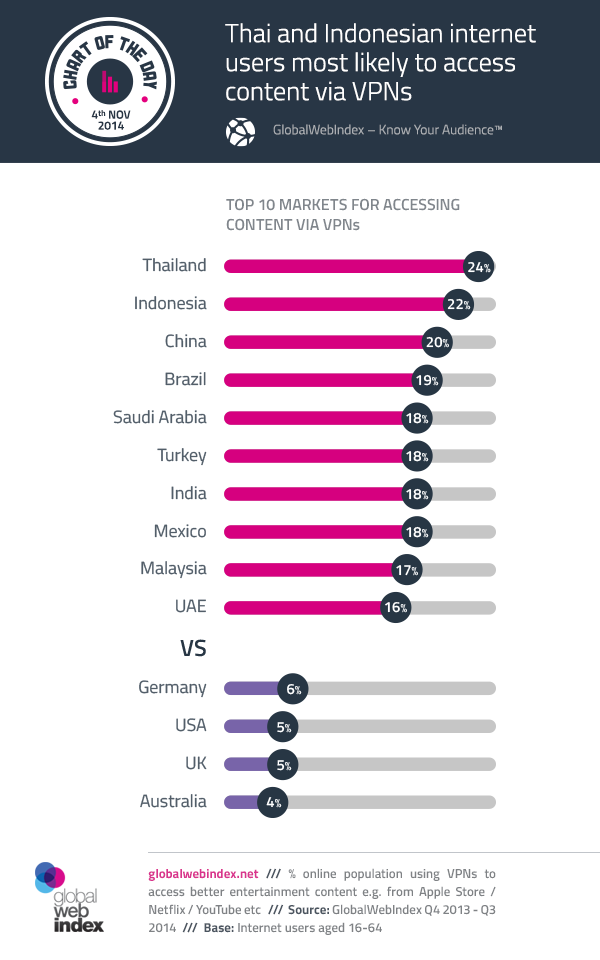