Last Thursday, Microsoft announced that its Windows 8 operating system had reached an important milestone – passing the 200 million licences mark. This is in line with our GWI estimate from Q4 2013 which placed the global user audience at 199.16 million.

So, how’s Windows 8 doing in terms of the wider OS market? Our chart shows that it’s now considerably ahead of the never-terribly-popular Vista, an operating system now used by fewer than 100 million PC/laptop users. Windows 8 is also leagues in front of some of the more niche PC operating systems such Apple’s OS X (4%, with just over 50 million users).

But it’s still got considerable ground to cover before it approaches the popularity of Windows XP or Windows 7 – operating systems which can boast close to 388.5 million and 735.6 million users respectively. Even with the effects of the natural replacement cycle, it will be quite some time before these established names lose their dominance.

That said, it’s worth noting that – at a country level – Windows 8 has made some notable inroads. Some 20% of PC users in the US and Mexico now say they’re using this OS; following closely behind are markets like the UK, UAE, Brazil and South Africa (all at 18%). At the other end of the spectrum, the figure falls below 10% in Indonesia, Taiwan and China. 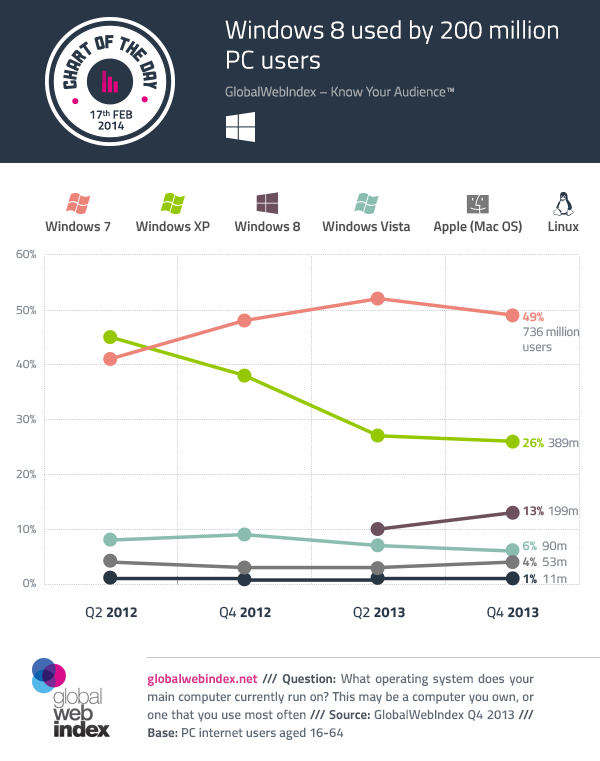