As Apple introduces its new operating systems, users can expect a makeover. Sources say Apple Design Chief Jony Ive plans to eschew many familiar features, including its Notes app and Calendar interfaces on iPhone and iPad. At this stage, speculation about how iOS user interaction will change is just that. But it does beg the question of how former iOS users are interacting with their Android devices.

In accordance with GlobalWebIndex Stream Device Report—Q1 2013, our universe estimate of Android/ex-iPhone users questioned how online activities on smartphones compare across three categories: average Internet users; iOS users; and Android users who used to own iPhones. When comparing numbers across certain activities, the results were striking—specifically, the fact that ex-iPhone users who had switched to Android engaged in more interactive behaviour online via their smartphones.

Degrees of activity were comparable in some cases; the number of respective Android/ex-iPhone and iOS users who had checked information on music, leisure of entertainment (since GWI 9) stood at 67% for both groups, while 78% of ex-Android/iPhone and 80% of iPhone users, respectively, checked the weather online. But when it came to activities requiring less passivity, Android users showed strong leadership. 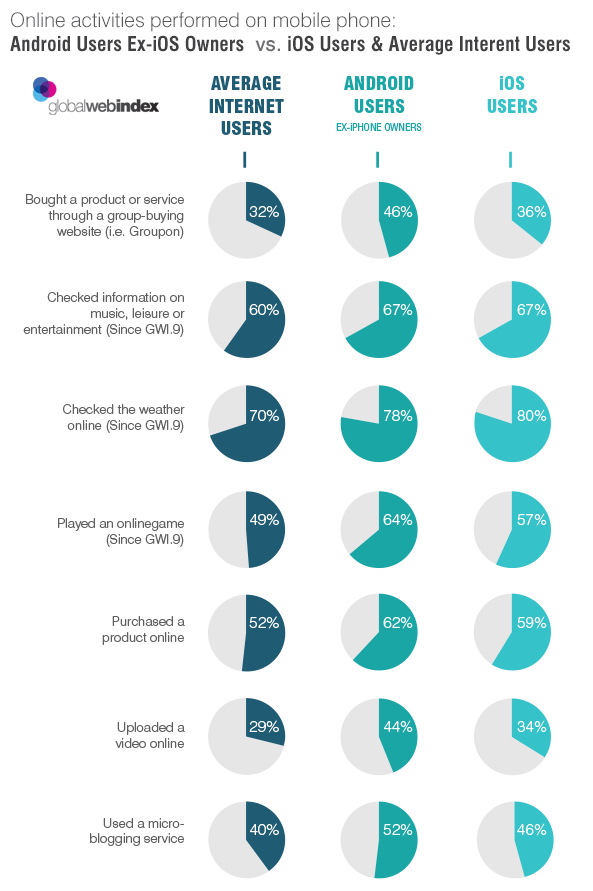 Android/ex-iPhone users also show increased use of micro-blogging; 52% of users reported using micro-blogging throughout Q1 2013, compared to 46% of iOS users and 40% of average Internet users.

The purchasing power of Apple users and developers is unquestionable. But as Android dominance in the mobile market soars, it will be curious to see how former iPhone users interact on their new Androids. If current trends continue, then this highly engaged bunch might re-write OS purchasing power—a trend that will have strong implications for the revenue historically associated with Apple.